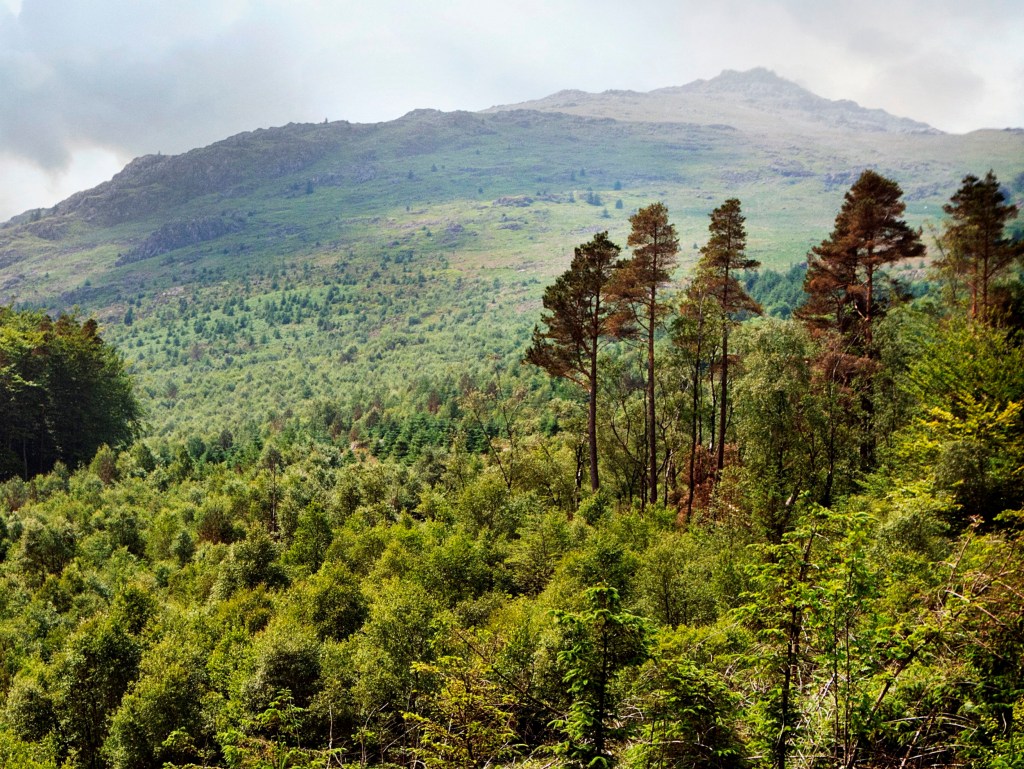 Tree planting is a vital part of efforts to meet the UK’s pledge to reach net-zero carbon emissions, but is it the quickest way to achieve reforestation?

A project in the Lake District is taking a different approach.

Hardknott Forest covers 630 acres of the Duddon Valley and since 2003, ecologists from the University of Leeds have been carefully restoring it to native woodland after decades as a conifer plantation.

Two million trees now grace the site, but unlike other reforestation programmes, only a tiny fraction have been planted by hand.

In partnership with Forestry England and with the help of volunteers, the team has instead been clearing the invasive conifers and letting nature take care of regeneration.

Professor Dominick Spracklen, Hardknott’s project manager, said: ‘It’s the process of a seed blowing in the wind, or a squirrel putting an acorn in the ground.

‘The seed comes from a local seed source so it is very well adapted to the climate conditions and the trees will grow where they naturally want to grow.’

Research to monitor progress has found between 3,000 and 4,000 trees per hectare are now growing across the site from natural regeneration.

‘We talk about these tree planting targets, but we should really be talking about woodland creation targets,’ Prof Spracklen said.

‘Some of that will be to do with tree planting, but natural regeneration could create new woodland for us as well.

‘We still think there is not enough talked about that in science and policy and media.’

In the past month alone, the Government has pledged more than £15 million for the planting of trees, thousands of which will be planted in plastic tubing to protect them from grazing animals – creating a mountain of waste.

The Hardknott team has been forced to plant some rarer species, such as aspen, juniper and willow, but is trying to kick the plastic habit.

‘The way we are getting around (plastic tubing) is just by planting more trees and accepting that we are going to lose some of those trees to browsing,’ Prof Spracklen said.

‘The benefits of not using the plastic outweigh the fact that you are going to lose some of the trees.’

Countries all over the world are relying on trees to help them meet their climate change targets under the Paris Agreement, so will this approach work elsewhere?

Prof Spracklen said: ‘There’s quite a lot of different work going on, including in tropical rainforests, of allowing natural regeneration to restore environments and it can be very effective.

‘But in some places, you find that if the system gets too degraded, it doesn’t work.’

In the UK, areas such as the Highlands have been systematically stripped of trees for generations to facilitate activities such as grouse shooting, meaning there is no seed source for miles.

Prof Spracklen said: ‘You see that also in parts of the tropics – there is research on sites that have become so degraded that you could leave it for decades and virtually no regeneration would happen.

‘You maybe need to give it a bit of a push through tree planting to get it going in the right direction.’

Forests bring huge benefits to neighbouring land, but despite their nature-led approach, the scientists at Hardknott avoid the term ‘rewilding’.

‘I don’t think the term ‘rewilding’ is very helpful anymore, and for good reason it gets some people very annoyed,’ Prof Spracklen said.

‘When you get more people into a discussion about what sustainable management can be, you often come to a solution which is actually a wilder, more natural way of managing land.

‘A lot of the problems that have happened in different parts of the country are where people who live there feel like they’ve been excluded from that discussion.’

Hardknott certainly has community involvement – over the course of 2020, the project has been inundated with new volunteers, something reported by conservation projects across the country.

‘But during lockdown, everyone was reconnecting with nature and valuing natural spaces close to their home.

‘It’s just created this huge urge for people to get out and do something, which is great.’

PrevPreviousBeware the fake NHS Covid-19 vaccine texts circulating – don’t fall for them
NextBrexit roaming charges: What does it mean for UK phone contracts?Next