Jupiter’s moon Europa may glow in the dark 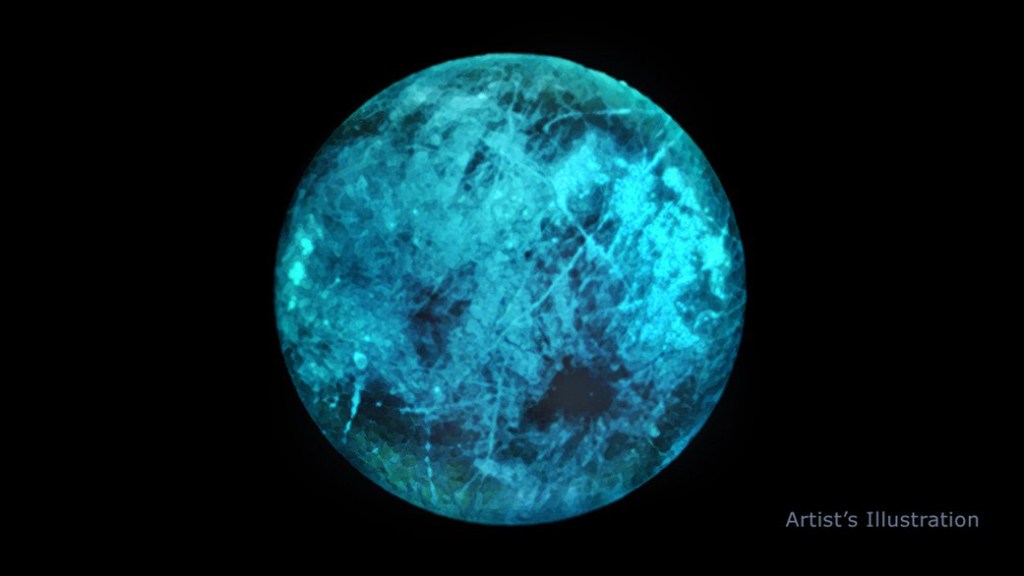 Jupiter’s water-filled moon Europa may glow green and blue in the night sky, according to new research from Nasa.

By day, the Solar System’s sixth-largest moon is battered with powerful particles from Jupiter, bathing its icy surface in high-energy radiation.

But on the darker side of the lunar surface, Europa may be glowing in the dark, emitting a glow either green or blue to the naked eye.

This glow is the result of salty compounds in the moon’s crust reacting to the intense radiation from Jupiter below.

A glowing moon in the night sky may not seem so strange – but we only see our own Moon because it reflects sunlight.

Europa’s glow is caused by an entirely different mechanism, according to Nasa’s scientists.

Its shine comes from within, a continuous glow, even on the side facing away from the Sun.

Though scientists are unsure exactly what these compounds may be, and what colour radiation they emit, it’s likely that the radiation would be bright enough to see without binoculars, provided you’re close enough.

The celestial apparition wouldn’t just be a pretty picture, either.

‘How that composition varies could give us clues about whether Europa harbors conditions suitable for life.’

The new research, published Nov 9 in Nature Astronomy, involved scientists using a spectrometer, a tool which separates light into component parts, to work out which parts of the light signal corresponded to certain compounds in Europa’s ice.

Typical observations using a spectrometer on a moon like Europa are taken using reflected sunlight on the moon’s dayside, but these new results show how Europa would look in the dark.

Scientists are particularly excited about learning more about Europa’s surface, because it’s one of the few bodies in the Solar System known to contain water, both solid and liquid

By analysing the surface, scientists can learn more about the ocean below – which could mean life, too.

They then took the tool to a high-powered radiation facility and pummelled it with intense blasts of energy.

The result – variations in the glow from the ice tied to different salty compositions of ice – led them to their discovery.

‘Seeing the sodium chloride brine with a significantly lower level of glow was the ‘aha’ moment that changed the course of the research,” said Fred Bateman, co-author of the paper.

‘If Europa weren’t under this radiation, it would look the way our moon looks to us – dark on the shadowed side,” Gudipati added.

‘But because it’s bombarded by the radiation from Jupiter, it glows in the dark.’

How many moons does Jupiter have?

Europa is one of Jupiter’s better known moons, but the Gas Giant actually has 79 moons in total.

The four largest of these moons are known as the Galilean moons, named after Italian Astronomer Galileo Galilei discovered them over the winter of 1609.

The other three moons are Io, Ganymede and Callisto, and are visible with an amateur telescope on a clear night’s sky.

These four celestial bodies are among the largest objects in the Solar System, after the Sun and its eight planets.

With a diameter larger than many dwarf planets, these objects could once have been considered planets in their own right – Ganymede, for example, is the largest moon in the Solar System, and is even bigger than the planet Mercury.

After the four Galilean moons, which were the only known moons of Jupiter until 1892, Amalthea was discovered, at the time the “fifth moon of Jupiter.”

As telescope technology and lens making improved over the 20th Century, a further 18 moons were discovered.

It was only at the turn of the century, that tens of other moons were discovered, led in part by the work of American astronomer Scott S. Sheppard.