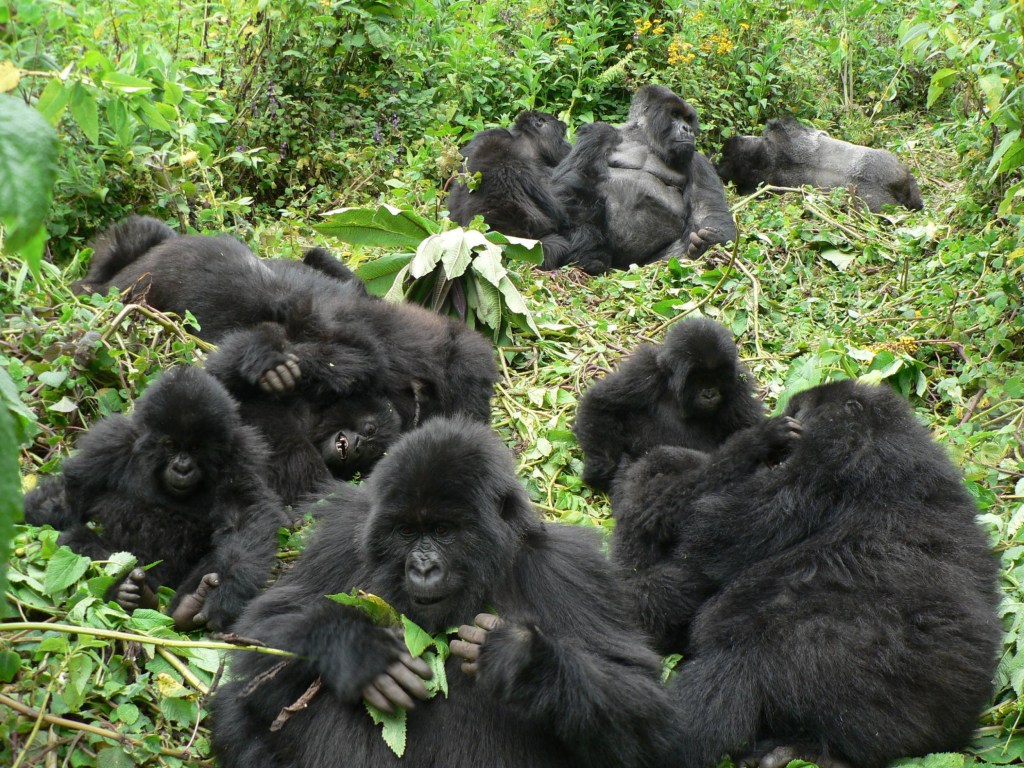 The danger of passing Covid-19 or other diseases to endangered mountain gorillas is increasing as people try to get closer to them.

The similarity of the great apes to humans makes them particularly vulnerable to diseases like the coronavirus.

And in recent years, people have been getting too close – often without masks – in search of better pictures for their Instagram accounts.

Influencers are disregarding safety proceedures to such an extent that researchers at Oxford Brookes University have called the danger of infection ‘very concerning.’

A team at the university looked at 858 photographs posted on Instagram between 2013 and 2019 – focusing on the two most commonly used hashtags in relation to gorilla trekking tourism namely #gorillatrekking and #gorillatracking – to analyse how close tourists got to the wild mountain gorillas they were visiting.

The majority (86%) showed tourists within four metres of the gorillas and 25 incidents of physical contact between a tourist and a gorilla.

Just 3% showed people at the recommended distance of at least seven metres.

The majority of photographs taken in the Democratic Republic of Congo showed people wearing face masks, whereas in Uganda and Rwanda no face masks were seen in the photographs, researchers said.

Women were closer to gorillas than men in 68% of the photographs, they added.

Dr Magdalena Svensson, lecturer in biological anthropology at Oxford Brookes University, said the fact that face masks were rarely worn in the photos they analysed ‘brings potential for disease transmission between people and the gorillas they visit’.

The study, published in the People and Nature journal, saw the researchers raise concerns that the popularity of travellers sharing close interactions with wild animals ‘can push people into risky behaviours to reproduce what they have seen’.

They said such selfies often ‘require a certain proximity between tourists and wildlife and are therefore inextricably linked’ to disease transmission.

Researchers said surgical face masks should be made compulsory for every person visiting mountain gorillas and other great apes and that people should keep to a minimum seven-metre distance from the animals.

They said the pandemic had made face masks more widely accepted and they are therefore confident the measure would not negatively affect tourist numbers or the tourist experience.

‘It is vital that we strengthen and enforce tour regulations to ensure gorilla trekking practices do not further threaten these already imperilled great apes.’

Dr Gladys Kalema-Zikusoka from Conservation Through Public Health, Uganda, said: ‘This research provides a valuable perspective on how much tourists are willing to share their too-close encounters with mountain gorillas through Instagram – which creates expectations for future tourists.

‘It highlights a great need for responsible tourism to provide adequate protection while minimising disease transmission, especially now during the Covid-19 pandemic.’

Those behind the study said there is an urgent need for stricter regulations relating to the distance between wildlife and tourists, a continual enforcement of the rules, an enhanced awareness campaign for tourists and social media users and reinforced training for guides and rangers.

The researchers said: ‘If we fail to address this issue in the near future, this form of ecotourism might turn into one of the main threats to the remaining wildlife populations’ survival.’

It is known that gorillas can suffer from respiratory diseases, like humans, and are not immune from the coronavirus.

The gorillas at the San Diego safari park are western lowland gorillas, which are critically endangered and the population has declined by more than 60% over the last 20 years.