How to watch Nasa land the Perseverance rover on Mars 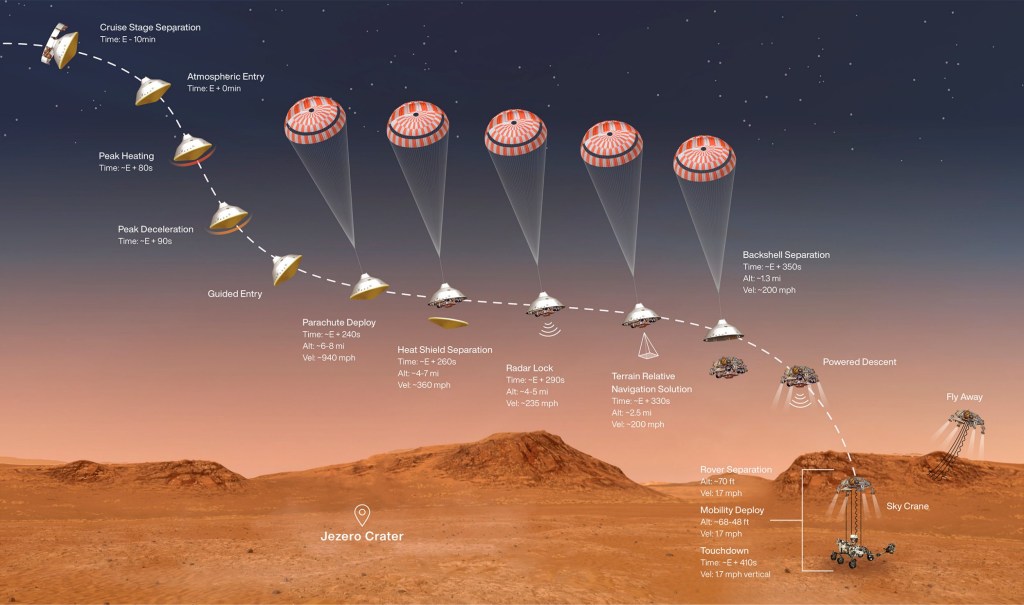 Nasa is preparing an audacious extra-terrestrial landing attempt as it looks to steer its rover, Perseverance, down to Mars tomorrow.

The US space agency remains the only national institution to successfully land a rover on Mars and will be hoping to survive the fabled ‘7 minutes of terror’ tomorrow evening.

Perseverance is part of the ‘Mars 2020 mission’ which set off from Florida in late July last year – when Mars and Earth were favorably aligned.

The rover is the largest ever vehicle to be dispatched to the Red Planet.

Built at Nasa’s Jet Propulsion Laboratory, it weighs a tonen, has a robotic arm that’s seven feet (two meters) long, has 19 cameras, and two microphones to record the Martian soundscape.

How to watch the Mars landing live from the UK

Nasa will be broadcasting the historic landing live on the internet as it unfolds.

The best place will be Nasa’s variety of YouTube channels which will be dedicated to the landing.

The main landing will be broadcast on Nasa’s main YouTube channel ‘NASA TV’ which you can find here.

There will be a clean feed of Mission Control on the Nasa Jet Propulsion Laboratory (JPL) ‘Raw’ channel here.

And, for the tech enthusiasts, there will be a 360-degree stream on the JPL channel here.

Of course, it won’t just be streamed on YouTube but also over the agency’s other social media channels on the likes of Facebook, Twitter, LinkedIn, Twitch and the dedicated Nasa smartphone app.

What time is the Nasa Perseverance rover landing on Mars?

In fact, broadcasts will be going on all through the day before (February 17) and the morning on the Nasa YouTube channels covering all aspects of the design and the science behind the rover and the mission.

Perseverance will land in Jezero Crater, a 28-mile-wide (45-kilometer-wide) basin located in the Martian northern hemisphere, which had been considered for previous missions, but was considered too difficult to land in until now.

How many rovers have been on Mars and how much does this one cost?

Nasa is spending approximately $2.4 billion on the total Mars 2020 mission.

Landing and operating the rover alone costs around $300 million.

Should it arrive intact, Perseverance will be only the fifth rover to successfully complete the journey since Pathfinder in 1997.

All have been American and the last, Curiosity, is still active.

China last week placed its Tianwen-1 spacecraft in orbit around Mars carrying both a lander and a rover, which it is hoped to land in May.