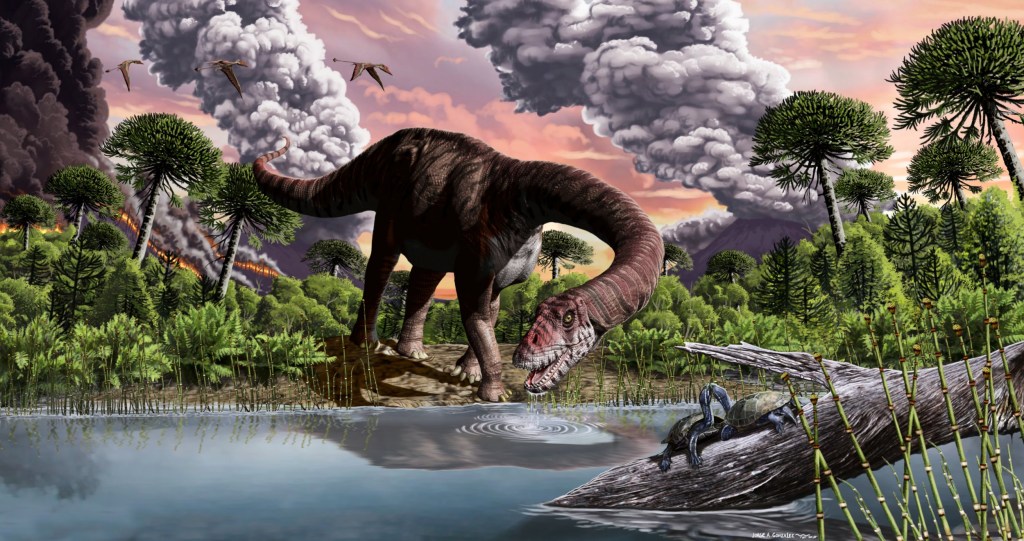 Giant dinosaurs were the product of global warming, say scientists, after discovering the oldest sauropod from 179 million years ago in Argentina.

The ‘gentle giant’, the size of a double decker bus, sheds fresh light on the evolution of the sauropods – the biggest animals that ever walked the earth.

It shows they were the product of global warming – which has implications for the world today, say scientists.

Lead author Dr Diego Pol said: ‘This is yet another warning in the fossil record.

‘Large emissions of CO2 and methane have not only altered the climate in the past – but also have ultimately caused biodiversity crisis, extinction of species and alterations of the ecosystems at a global scale.

‘Fossils offer cautionary tales about the impact greenhouse gases can have on the evolution and extinction of species.’

Unlike the 130 foot-long, 100-ton beasts that came later, Bagualia was much smaller but still big.

Dr Pol, of The Museum of Palaeontology Egidio Feruglio in Patagonia, said: ‘It reached about 40 feet from head to tail – and weighed about ten tonnes.’

It also displayed all the hallmarks of famous sauropod descendants like Diplodocus, and Giraffatitan.

Bagualia had the characteristic long neck, robust skeleton – and four sturdy legs. Its fossilised remains even included an intact skull – which is crucial to understanding it.

The remains belonged to at least three individuals. Jaw bones, multiple isolated teeth, vertebrae and limbs enabled a detailed reconstruction of its appearance.

Dr Pol, of The Museum of Palaeontology Egidio Feruglio in Patagonia, said: ‘The bones are beautifully preserved including the fairly complete skull, which is very very rare for an early sauropod because they were very delicate.

‘Over 100 bones of various individuals were found of the new species.’

He went on: ‘Bagualia is a sauropod – the large bodied, quadrupedal and long necked dinosaurs.

‘Like all sauropods it was herbivorous. Its dentition suggests this dinosaur fed on the conifers and other plants that composed the forests about 180 million years ago.’

The dimensions of Bagualia would also have deterred carnivorous dinosaurs from attacking it.

Some were 17 times heavier than an African elephant. They were also widespread with skeletons turning up on all the continents except Antarctica.

Their evolution has stumped experts for decades. Now an international team has directly linked them to an environmental catastrophe for the first time.

The layers of sediment Bagualia was dug up from in the Patagonian desert were very precisely dated to the mysterious disappearance of more primitive sauropods.

Dr Pol said: ‘Finds of plant fossils in layers just before that time and at the time of Bagualia show the climate and the ecology these animals lived in.’

An analysis calculated the age of the rocks using a technique called radiometric dating. It is based on the decay rate of certain chemicals.

This indicated the warm and humid weather in which lush vegetation had thrived vanished suddenly.

Dr Pol said: ‘These environmental changes were apparently driven by a greenhouse effect due to climate gasses such as CO2 and methane caused by increased volcanism at that time.

‘Evidence of these eruptions are found on many southern continents, including South America, southern Africa, and Antarctica.’

With their slender teeth, small-bodied sauropods preferred softer leaves and plants. They died out because of the harder greenhouse food.

Explained Dr Pol: ‘The large sauropods were the only lineage with a much more robust dentition – well-adapted for such tough vegetation.

‘Thus they flourished and became the dominant group of herbivorous dinosaurs at that time. Indeed, the specialisation for this kind of vegetation was probably one of the reasons why these animals reached their gigantic sizes.

‘As large digestion chambers are needed to cope with such food, there was a general tendency for these animals to become ever larger.’

Bagualia, described in prestigious British journal Proceedings of the Royal Society B: Biological Scienes, is at the base of their evolutionary tree.

Dr Pol said: ‘Sauropods were truly amazing animals, and included the largest land-living animals known, with body lengths of up to 40 metres (131ft) and weights of 70 tons or more.’

‘However, these giant animals did not appear directly at the beginning of the era of dinosaurs, about 230 million years ago.

‘For the first 50 million years of their evolutionary history, the Sauropodomorpha – the lineage the sauropods belong to – were represented by several groups of bipedal to quadrupedal animals.

‘Although some of them reached already large body sizes of about ten metres (33ft) in length and a few tons in weight these groups also included smaller and lightly built animals – some of which were no larger than a goat.

‘Furthermore, all of these animals had rather slender teeth, indicating these plant-eating animals fed on rather soft and lush vegetation.

‘However, towards the end of the Early Jurassic period, about 180 million years ago, all these groups suddenly disappeared, and only one lineage survived and thrived – the big sauropods.

‘What caused this faunal change during the Early Jurassic has remained enigmatic so far.’

He added: ‘New high precision radiometric dates show the rise of these dinosaurs coincided with a drastic environmental crisis, involving warming of climate and aridisation recorded in the aftermath of major volcanic eruptions in the southern hemisphere.’

‘Among them the most completely known are the recently published Asfaltovenator vialidadi and Eoabelisaurus mefi. These were mid-sized meat-eaters weighing about two tons – similar to Allosaurus.

‘Bagualia was much larger and probably was not frequently attacked once it reached adult size. It is one of the evolutionary advantages that benefited gigantism in these herbivores.’