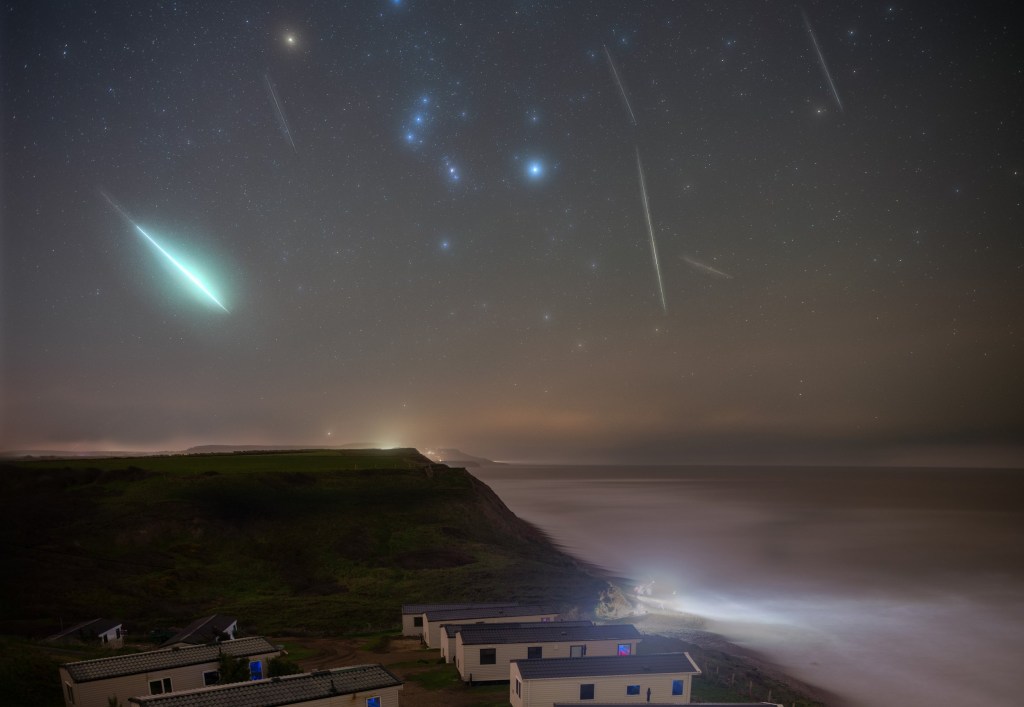 The Geminids meteor shower is at its most vibrant right now as it peaks over the nights of December 13 and December 14 above the UK.

One photographer managed to capture a stunning image of the meteor shower above the Isle of Wight during the weekend.

The picture is a composite, showing seven Geminid meteors over the space of five hours during clear skies from Saturday evening into Sunday morning.

The images were taken on the south coast of the island on the cliffs above Grange Chine overlooking Grange Farm Campsite.

The lights on the beach are from a group of fishermen who were night fishing.

If you want to see the Geminids meteor shower for yourself, you’ll have a good opportunity tonight as the shower is still in its peak.

To see the meteor shower you need to be facing south and you should be able to see it without the need of any telescopes as long as the sky isn’t too cloudy.

It is recommended that you try to get away from city lights as it can make it harder to see because of the light pollution.

Why is it called the Geminids?

This particular meteor show is called the Geminids because it seems to radiate from the constellation of Gemini. However the Geminids meteors are the broken debris from the space object the 3200 Phaethon.

The 3200 Phaethon may have collided with another object in the distant past, which produced the stream of particles that hurdle across earth’s atmosphere and created a meteor shower.

The Geminids are the only meteor shower to be produced by an asteroid.

Where do the Geminids come from?

The space rock is named after Phaethon, the son of the Greek sun god Helios.

Phaethon nearly destroyed the earth as he pulled the sun across the sky when he was challenged to prove he was related to Helios. Causing death and destruction on earth Phaethon was only stopped by Zeus who blasted him with a thunderbolt.

The 3200 Phaethon orbits the Earth every 1.4 years and comes ever-so-close to earth, at about 150 million kilometres, and that’s what makes this light show one of the most spectacular.