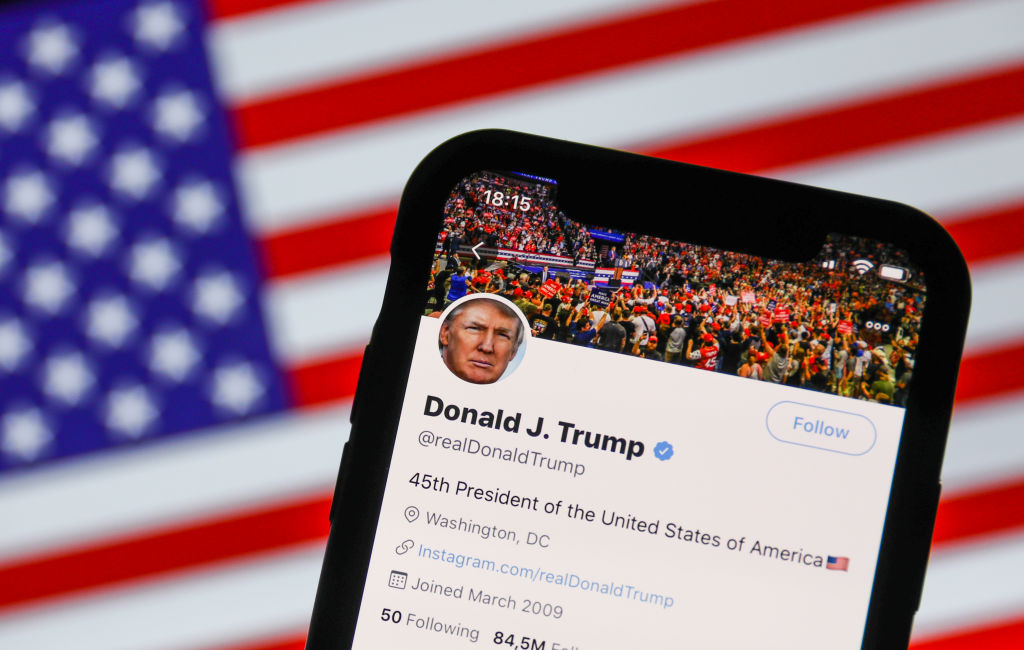 Twitter’s official Safety account confirmed the news on Friday night, tweeting: ‘After close review of recent Tweets from the @realDonaldTrump account and the context around them we have permanently suspended the account due to the risk of further incitement of violence.

‘In the context of horrific events this week, we made it clear on Wednesday that additional violations of the Twitter Rules would potentially result in this very course of action.

‘Our public interest framework exists to enable the public to hear from elected officials and world leaders directly. It is built on a principle that the people have a right to hold power to account in the open.

‘However, we made it clear going back years that these accounts are not above our rules and cannot use Twitter to incite violence. We will continue to be transparent around our policies and their enforcement.’

Twitter also removed a video in which the US president told his ‘very special’ supporters ‘we love you’, after they broke the US congress building forcing it into a lockdown.

While the move is unprecedented for a former sitting president, there have been previous occasions where Trump has come close to losing his Twitter access.

In May of last year, Twitter hid one of Trump’s tweets as it violated one of their long-standing rules prohibiting the glorification of violence.

After mass protests across the US following the murder of the black man George Floyd, the President threatened to ‘send in the National Guard’, and added a warning that ‘when the looting starts, the shooting starts.’

One of Twitter’s justifications for keeping Trump’s tweet up and hiding it, rather than suspending the tweet entirely, was that the US president is a ‘newsworthy’ individual, for which they make exemptions.

A ‘newsworthy’ individual is classed as an elected official with more than 250,000 followers.

But the social media giant confirmed that once Trump leaves office in January, he will lose this distinction.

The tweet in May isn’t the only tweet that has crossed the line in Twitter’s eyes, either.

After the November election, Trump tweeted a slew of allegations (12, by Twitter’s count) that the election was fraudulent and rigged for Joe Biden.

Twitter responded by flagging the tweets and providing links to information which refuted Trump’s baseless claims.

Twitter’s terms and conditions state they ‘suspend or terminate’ accounts ‘at any time for any or no reason’, but almost all accounts are suspended for violating specific parts of their user agreement.

What will Trump do next?

Many banned Twitter users have migrated to alternative microblogging social network Parler in recent years, which has less strict rules about what can and can’t be said on the platform.

While many Trump-supporters use the app, it’s not clear whether Trump has an account on the platform or whether he uses it.

But given the amount of Trump-friendly voices on the app, it would make a logical next step for someone who has been locked out of Twitter.

Even before he was elected President, there was talk of Trump starting his own media operation – and that possibility seems even more likely given the suspension.

Trump has had long ties with media and news executives, and sources close to the former president say that his own media outfit has been long on his mind.

Whether he will start his own from scratch, or take over one of the networks friendly to him, like Newsmax or One America News Network, remains to be seen.

There have also been cases of Twitter reversing their bans, but these aren’t common.

In early October, weeks before the 2020 election, Twitter restricted the New York Post’s account for sharing potentially false information surrounding the election – that of Joe Biden’s son and a leaked hard drive.

But soon after, they reversed their ban on the account, and allowed it to start sharing again.