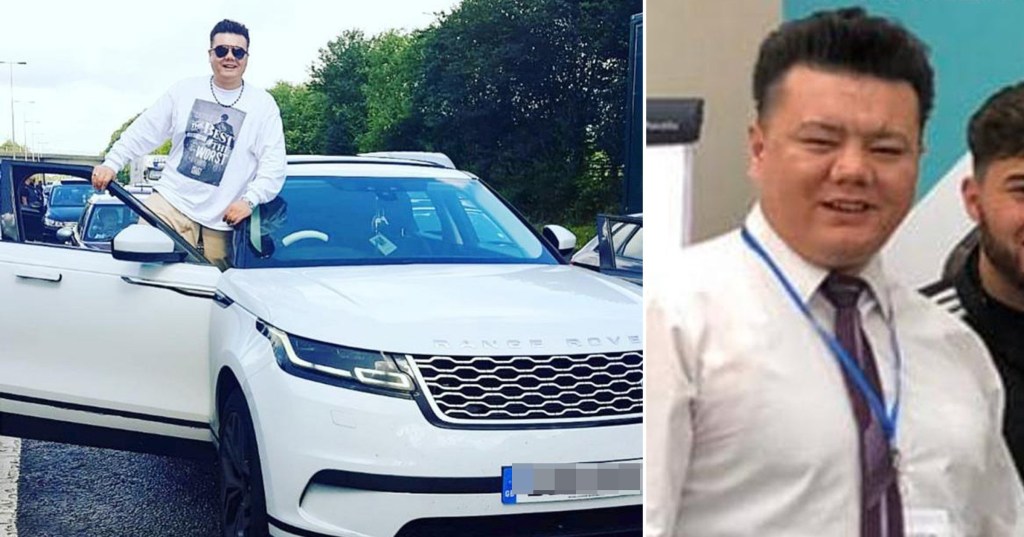 Victims of an alleged cryptocurrency pyramid scheme have told of the sleepless nights they’ve had after losing thousands of pounds, with no hope of getting their money back.

Many are wracked with guilt after persuading their loved ones to invest in Lyfcoin, mistakenly thinking they would be able to double their money in as little as five months.

Now a group 14 buyers are pushing authorities to take action, having collectively lost £100,000 between them. They estimate around £2.5million has been lost by investors across the UK, but Lyfcoin has also been sold internationally.

Some emptied their retirement funds thinking they were onto a winner, while others are now in debt to family members they got on board. Victims say police have been too quick to dismiss their complaints as a civil matter, or a ‘business deal gone wrong’.

But they believe they have been scammed, after being sold Lyfcoin at $1.60 each only to later discover it was worth just 8 cents, the value of which appears to be from an in-house exchange.

Customers were told that if they invested and hung on for five months, their money would double and they’d be free to cash out. But just as the deadline approached they were unexpectedly told they’d have to keep their money in the scheme for 12 or 24 months, sending many people into a panic.

Even now, users are unable to buy goods and services with the coins as they were led to believe and can’t sell them on an independent exchange like they can with Bitcoin and other legitimate cryptocurrencies.

Several users who have spoken to Metro.co.uk say they were recruited by a man named Sakhi Rezaie, who showed them presentations, carried out Zoom seminars and invited some people to his office in Birmingham.

Payments for Lyfcoin packages were sent directly to his bank, often through a middle man who took a cut, rather than to any official Lyfcoin account.

Buyers believe another three or four other ringleaders were involved in the UK operation, however Mr Rezaie insists he was simply an ordinary customer like anyone else.

Investor Atif Hussain, 38, was laid off from his job as an architectural engineer during the pandemic and is now in debt to family members. He told Metro.co.uk: ‘I’ve had sleepless nights thinking about how I’m not going to get my money back.

‘It’s very, very stressful. The rest of my family haven’t taken it very well. I promised my mum that I’m going to repay her, it’s not fair because I introduced her.’

Bank transfers and WhatsApp messages, seen by Metro.co.uk, show he made the transfers to directly Mr Rezai, rather than to Lyfcoin itself, transferring to an account named MK Brothers LTD.

After selling a package worth £12,200 to a work colleague, who quickly regretted his decision, Mr Hussain says he tried to get a refund but that Mr Rezai ‘started avoiding me’.

When he confronted him during a presentation in February 2019, he was told he has ‘nothing to worry about’ and was advised to keep his money in the system to maximise his returns.

Buyers had to take part in a process known as ‘staking’, which involves locking your investment for a certain amount of time to secure funds for an operation.

Mr Hussain added: ‘The constant reassurances and promises given by leaders in the meetings gave members the false confidence that we will get our investment back with greater reward but the reality is that a handful of people gained from the losses of hundreds of members.’

Alarm bells started ringing when investors were told they were no longer able to cash-in their investment after five months.

Mr Hussain added: ‘When I asked him [Mr Rezaei] to sell my coins to newcomers, he’d ignore my questions and start discussing other issues such as the “big event” the owners are planning, however, this did not take place and we did not get to meet the owners. ‘

He said that around the end of March 2019, Mr Rezaie mentioned a ‘buy back’ scheme where people would be able to sell the coins back to Lyfcoin, but this failed to materialise.

Mr Hussain added: ‘I felt that I had been missold the investment and began to suspect that the company was fraudulent and was defrauding investors.

‘I became aware of others who had dealings with Sakhi and they too felt that they have been defrauded.

‘As Lyfcoin hadn’t gone to exchange the value of $1.60 was fabricated and couldn’t be verified by any exchange so in essence was worth zero.

‘There was a website which he referred to known as ‘Ether Market’ which he presented to members about the value and circulation of Lyfcoin which disappeared mid-2019.’

In December last year, Mr Hussain was invited to a meeting in Coventry with two men named Niraj Mohan and Bharat Kumar, who he understood to be the new UK owners.

There is little known about who owns Lyfcoin as a whole, the only hint on the website shows an incomplete address in Estonia.

Mr Hussain says the owners accepted people had been scammed in the past under the previous ownership and said that existing coins they held ‘were worth zero’. However Lyfcoin is now trading at 8 cents, according to its website.

According to Mr Hussain, the new owners said they could not be held responsible for any losses or coins bought before March 2019 and advised people to take up disputes with the agents they bought from.

He added: ‘I tried to negotiate with Sakhi up until the New Year but at this time he was being approached by many people who wanted their money back so went quiet and started ignoring my calls.’

Convinced he had fallen for a ‘pyramid scheme’, Mr Hussain reported the matter to national reporting centre Action Fraud, who passed it on to West Midlands Police.

After speaking out about the scheme on social media, Mr Hussain says he was offered an ‘interest free loan’ of £15,500 by Mr Rezaie, which he was ‘happy to wipe off if Lyfcoin is not a success’.

On March 12 this year, Mr Hussain signed a contract, seen by Metro.co.uk, promising to drop the case with police and to publically apologise to Mr Rezaie on social media, in return for monthly payments of around £5,000.

But after the second payment wasn’t made on April 1, Mr Hussain said the contract had been breached and considered void by its mediators. He then decided to ‘blow the whistle again’, warning members of a Lyfcoin WhatsApp group.

He added: ‘I mentioned the scam and posted the contract to highlight Sakhi’s desperation to keep this matter quiet and away from the attention of other members.’

After being informed of the case in May 2020, West Midlands Police decided to drop it, as none of the documents or photos provided took the case ‘further forward’.

Mr Hussain says the scheme is a very similar model to OneCoin whose founder Ruja Ignatova is still on the run from US authorities.

City of London Police were accused by lawyers of ‘failing to investigate adequately, or at all’ after dropping their probe into the $4billion pyramid scheme around December last year.

It found ‘forces being unable to provide basic data relating to the demand presented by fraud; for example, 7 of the 11 forces we inspected were unable to tell us how many of the reports of fraud that they received directly, resulted in attendance or other police activity’.

Their findings suggested ‘a lack of awareness among investigators and supervisors of important resources such as authorised professional practice and the fraud’.

Mr Hussain added: ‘The people who are supposed to be protecting us aren’t putting their money and resources into this. There’s people who literally lost their houses and their pensions.’

While there is no suggestion the new owners of Lyfcoin are acting fraudulently, Mr Hussain says crucial components of a regular cryptocurrency are still missing.

He added: ‘The golden rule is that you have to go onto an exchange, like with Bitcoin, and you have to have a wallet for your cryptocurrency.

‘Initially the only reason I bought this was they told us it was going to be linked with eBay, Amazon.

Another alleged victim, who asked not to be named, says she was shown the ropes on a Zoom chat with Mr Rezaie, who reportedly boasted about buying a £70,000 Range Rover with his earnings.

She says Mr Rezaie admitted to the coins being worth 8 cents when later confronted on the phone, but that he blamed it on an unexpected downturn rather than the $1.60 value being fabricated.

She added: ‘I felt like a fool. I felt quite stupid. I was really shocked at how I was fooled, I felt gullible.

‘I’ve definitely learnt a lesson. If it looks too good to be true, it probably is.’

Another alleged victim is a woman in her late 30s who once worked in investment banking.

Her former profession made her feel ‘even more stupid’ for being duped and for getting other family members to part with their cash.

She told Metro.co.uk: ‘I don’t know scams don’t get me wrong but I know how companies start up I know you have to do due diligence, I know this because I do it.

‘Everyone trusted me. I was in financial markets, that’s why I feel even more of a fool.’

The Londoner later persuaded her mum to funnel around £13,000 of her retirement fund into the scheme.

She was due to pay off her mortgage the following year but now these hopes have been shattered.

The woman added: ‘I told my sister, she was very reluctant, I was like “Are you mad? This is a once in a lifetime thing’

As she got more and more friends and family on board, investors kept on receiving messages to mentioning a ‘big announcements’ and ‘new owners’.

The woman’s heart sank when she got a message saying investments would now have to be locked in for 24 months.

It is understood people were given a choice between a 12 or 24 month automated staking system.

The woman added: ‘I immediately went back to him [Mr Rezaie] and said “no no no no no”. I sold this to my mum and my sister and friends as a five month thing.’

She says she was told about a ‘buy back pass’ which would allow people to sell their coins back, which would be operational in five months time.

But she says Mr Rezaie kept on telling her ‘just wait, just wait’ after it never materialised.

The woman added: ‘I have an angry mother and sister, my friend I was doing it for her because she didn’t understand everything.

‘I felt terrible. My sister said I’m absolutely fuming I can’t believe you’ve done this to me.’

When approached by Metro.co.uk, Mr Rezaie said: ‘The company has nothing to do with me. I used to be a normal customer the same as anyone else.

When asked if people could use Lyfcoin to buy goods and services, Mr Rezaie mentioned a scheme allowing people to use it at restaurants, but there’s no evidence of this getting off the ground.

A West Midlands Police spokesperson told Metro.co.uk: ‘We were investigating a report of suspected fraud involving crypto currency which was reported to us in May this year. Following enquiries, it was found that no offences have been committed.’

Mr Hussain has since logged a formal complaint with Professional Standards Department.

PrevPrevious‘Fireball’ space rock that smashed into frozen lake ‘holds key to origins of life on Earth’
NextNasa moon discovery: What does finding water on the moon actually mean?Next