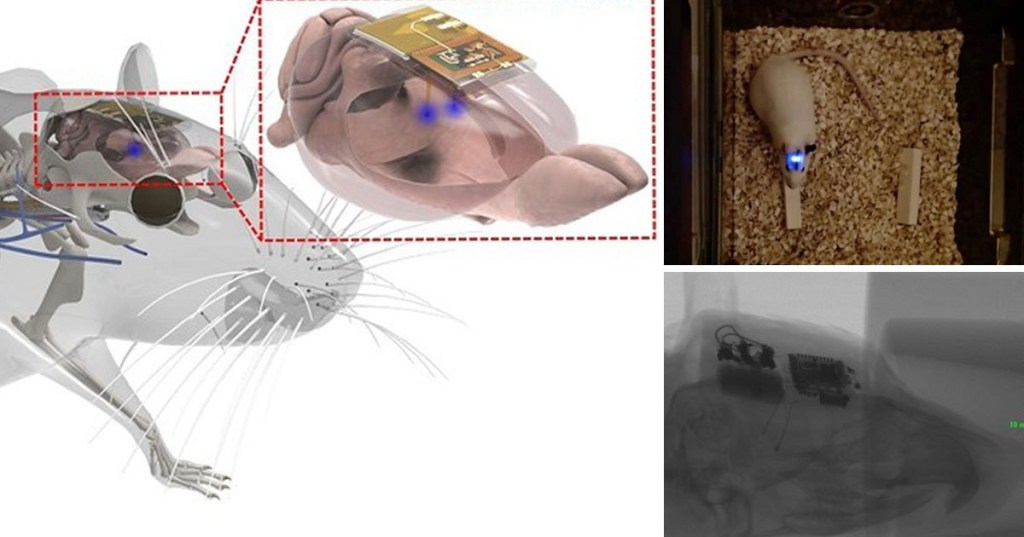 A tiny brain implant containing LED lights the size of a single grain of salt has been engineered by a group of scientists in South Korea.

The team from the Korea Advanced Institute of Science and Technology (KAIST) say the so-called nanochip could be used to alter moods.

It’s made from ultra-soft and bio-compliant polymers that provide compatability with brain tissue. The lights can be used to send messages to the neurons in the brain and may eventually be used to treat neurodegenerative diseases.

The scientists tested it out on rats by injecting them with cocaine and then sending signals to the brain to suppress the effects.

‘This device can be operated anywhere and anytime to manipulate neural circuits, which makes it a highly versatile tool for investigating brain functions,’ said lead author Choong Yeon Kim, a researcher at KAIST.

What makes the implant even more impressive, is that it connects to a smartphone app and can be charged wirelessly from outside the body.

To enable the charging and controls, researchers developed a tiny circuit that integrates a wireless energy harvester with a coil antenna and a Bluetooth low-energy chip.

An alternating magnetic field can harmlessly penetrate through tissue, and generate electricity inside the device to charge the battery.

‘The fact that we can control a specific behaviour of animals, by delivering light stimulation into the brain just with a simple manipulation of smartphone app, watching freely moving animals nearby, is very interesting and stimulates a lot of imagination,’ said Jeong-Hoon Kim, a professor of physiology at Yonsei University’s College of Medicine.

‘This technology will facilitate various avenues of brain research.’

The researchers believe this brain implant technology may lead to new opportunities for brain research and therapeutic intervention to treat diseases in the brain and other organs.

PrevPreviousHow to cancel Netflix: is it free to cancel?
NextGold-tongued mummy discovered in 2,000-year-old burial siteNext