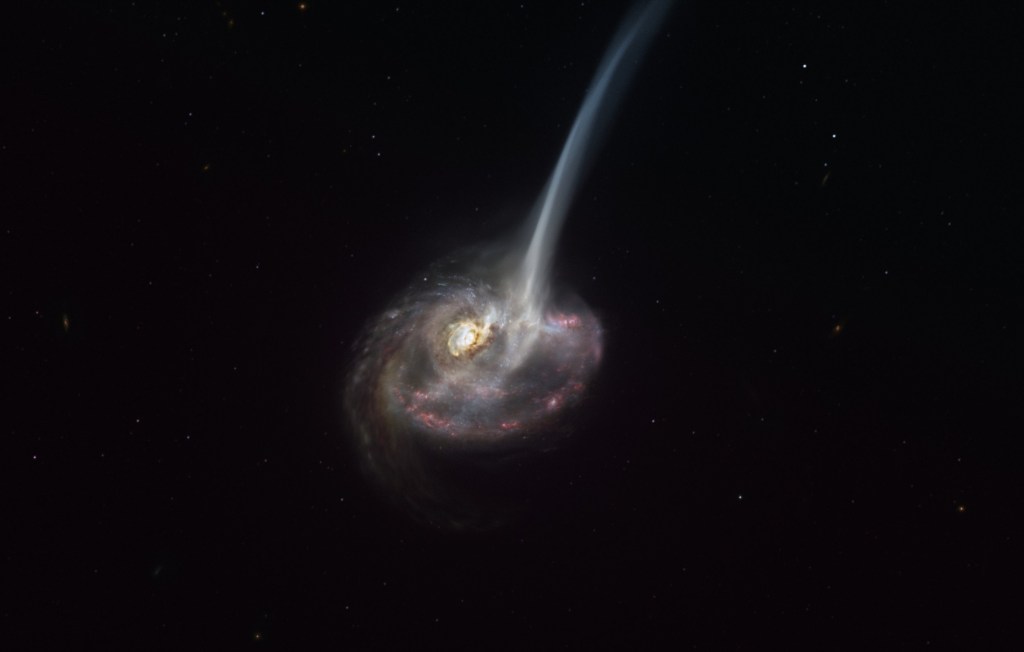 Astronomers have been studying a galaxy coming to the end of its life nine billion years in the past.

An international team of scientists, led by Durham University, looked into the far depths of the universe to understand whether galaxy mergers could stop star formation.

A merger causes a galaxy to lose gas and therefore the ability to form new stars.

The team confirmed that a huge amount of star-forming gas – equivalent to 10,000 suns – was ejected in the case of the galaxy they found.

Researchers say this event, together with a large amount of star formation in the nuclear regions of the newly merged galaxy – dubbed ID2299 – will eventually deprive the single merged body of the fuel needed for new stars to form.

Lead author Dr Annagrazia Puglisi, in Durham University’s Centre for Extragalactic Astronomy, said: ‘We don’t yet know what the exact processes are behind the switching off of star formation in massive galaxies.

‘Feedback driven winds from star formation or active black holes are thought to be the main responsible for expelling the gas and quenching the growth. Our research provides evidence that the gas being flung from ID2299 is likely to have been tidally ejected because of the merger between two gas rich galaxies.

‘The gravitational interaction between two galaxies can thus provide sufficient angular momentum to kick out part of the gas into the galaxy surroundings.

‘This suggests that mergers are also capable of altering the future evolution of a galaxy by limiting its ability to form stars over millions of years and deserve more investigation when thinking about the factors that limit galaxy growth.’