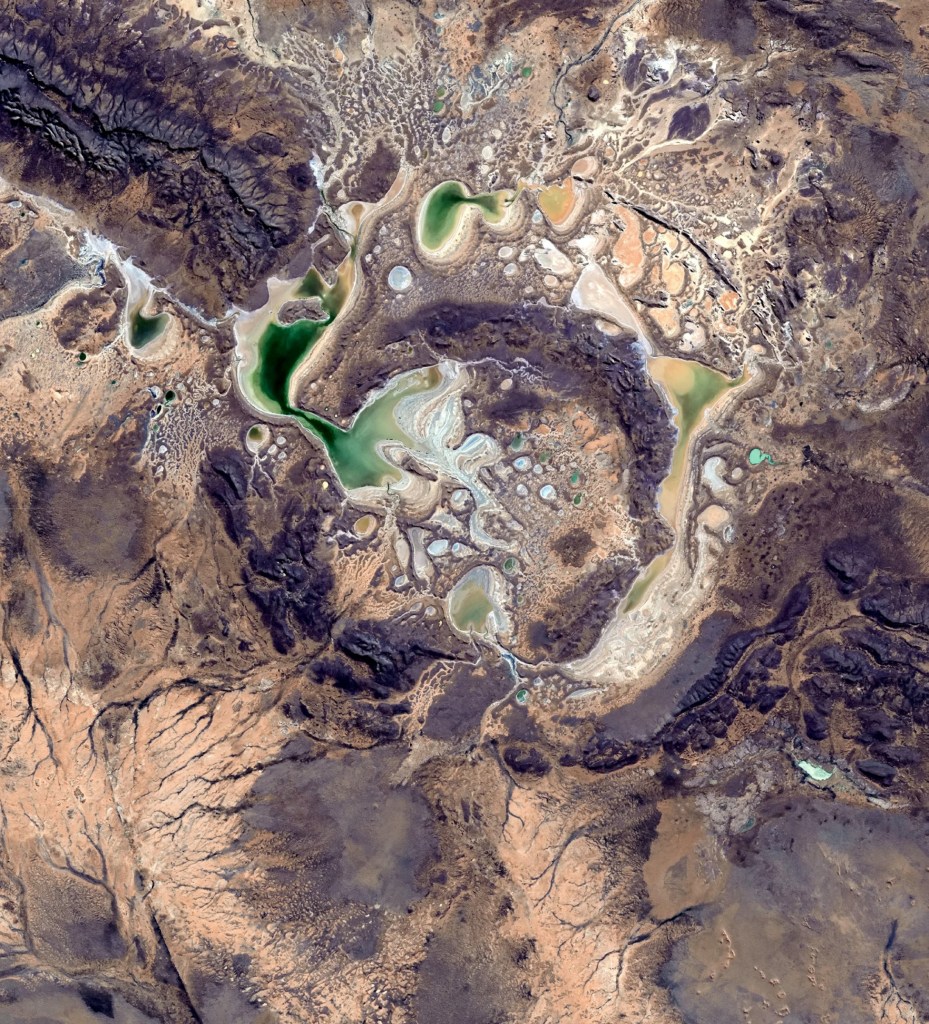 Looking like modern art, these are craters made by asteroids and comets published in the world’s first atlas of the extraterrestrial collisions

It includes detailed geological descriptions and photographs of the breathtaking rocky landscapes.

Titled ‘Terrestrial impact Structures’, the two-volumes include ‘essential details’ about each impact crater, including ones which have now vanished from view.

This is because most craters only last a few thousand years before being filled or eroded, and can then only be identified by unique changes in the ground’s minerals from the shock wave created upon impact.

Co-author Professor Thomas Kenkmann at the University of Freiburg in Germany said: ‘The formation of craters by asteroid and comet impact has always been a fundamental process in the solar system.

‘As the planets developed along with their moons, these impacts played an important part in accreting planetary mass, shaping the surfaces of planetary bodies, and later also influencing their development.’

‘And larger meteorite impacts eventually affected the development of life on Earth.’

The researchers used a low orbit radar satellite dubbed TanDEM-X between 2010 and 2016 to measure every known crater on the Earth’s surface with a height accuracy of up to a metre.

These measurements helped them build a digital terrain model of every known crater including the Manicouagan crater in Canada, Cerro do Jarau in Brazil, the Shoemaker in Western Australia and the Gweni-Fada in Chad, Africa.

Professor Kenkmann said: ‘Lunar and interplanetary spaceflight over the past 50 years has provided us with detailed maps of the old, impact-crater covered surfaces of our Solar System neighbours.

‘For Earth, the global impact crater record only represents a fraction of the bombardment that our planet has had to endure.’

The books also introduce readers to the basic principles of impact cratering, radar remote sensing, and provide details of the TanDEM-X mission and field work undertaken by the researchers.

Famous craters such as the Vredefort and the Chicxulub crater in Mexico’s Yucatan Peninsula, which put an end to the dinosaurs, are also featured in the atlas.

Thought to have been 185 miles across and 25 miles deep, the world’s largest and oldest crater, the Vredefort, appeared when a meteorite or asteroid struck what is now South Africa some 2.02 billion years ago.

Gauging how big these collisions really were is difficult as the craters have shrunk and in many cases disappeared.

Professor Kenkmann said: ‘The surface of our planet is always changing and after a few thousand years craters can disappear.

‘In some of them a lake has been formed or they have been buried, others are completely eroded.

‘But the shock wave creates changes in the minerals in the ground that are unique, so even if you don’t see the crater, the shock signature remains.

‘What we sum up in this atlas are all the confirmed impact structures, even the ones you don’t see.’

Unfortunately the biggest crater in the UK is underwater, about 25 miles off the northwest coast of Scotland and so does not feature in the atlas.

The underwater hole, first discovered in 2008, was carved when a three billion tonne rock smashed into the Mich basin, between the isles of Lewis and Harris in the Outer Hebrides at 40,000 miles per hour.

Asked what his favourite crater was, Professor Kenkmann said: ‘I have a special relationship to those craters in which I have carried out field work, sometimes under adventurous conditions.

‘The Australian craters often need helicopter access and then you are alone there in the outback for a couple of weeks mapping and investigating the crater structures.

‘That is really cool.’

He added: ‘Really nice was also the investigation of the morphologically spectacular crater Upheaval Dome in Utah in Canyonlands National park on the Colorado plateau.

‘This crater is deeply eroded and gives complete 3D insights into what is happening with the rock beneath a crater.

‘By the way, this crater was originally thought to be a salt dome until we were able to detect shocked minerals and proved its impact origin.’

The books, which come in a slipcase, are available for purchase on the publisher’s website Verlag Pfeil.

PrevPreviousUK defence boss says Army could have 30,000 robot soldiers by 2030s
NextParents are concerned about their kids’ exposure to fake newsNext