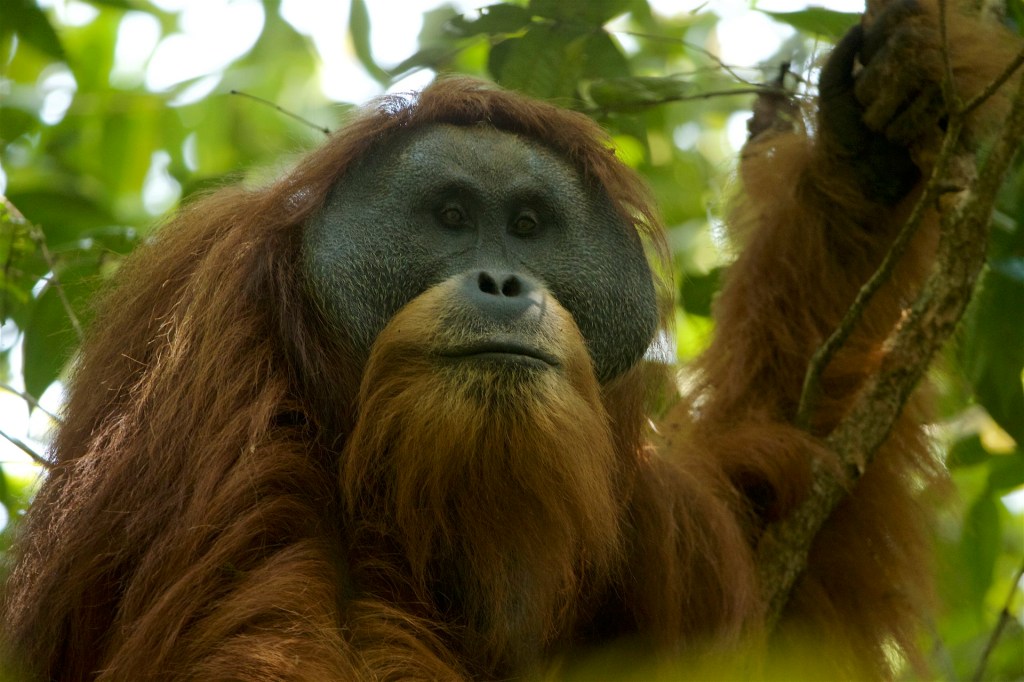 The Tapanuli orangutan – the world’s most threatened great ape – is in greater danger of becoming extinct than previously thought, scientists believe.

The rare primate species was only identified in 2017, with a small population of around 800 individuals living in the forests of North Sumatra in Indonesia.

Researchers now believe that their current habitat, which is restricted to mountain territory only, is not ideal for the creatures who live in disconnected groups.

Professor Erik Meijaard, of the Durrell Institute of Conservation and Ecology, University of Kent, said: ‘Some scientists have claimed that the Tapanuli orangutan is a species that is specifically adapted to living at high elevations, because it currently occurs at an average altitude of 834 metres above sea level.

‘Our study, however, indicates that the Tapanuli used to primarily inhabit in lowland forest areas, and that a combination of unsustainable hunting and forest fragmentation drove the species to extinction in those areas.’

The Tapanuli orangutan (Pongo tapanuliensis) currently occupies an area of about 1,000 square kilometres of upland forest.

The team calculated the historic distribution range of the orangutan species by looking at records from journal and newspaper archives.

Documentation unearthed by the researchers revealed that large parts of the forests in northern Sumatra had already been converted to smallholder agriculture in the 1930s, long before industrial-scale plantation developments began in the 1970s.

The researchers believe that a combination of deforestation and unsustainable hunting practices ‘likely drove various populations to the south, east and west of the current population to extinction’.

Serge Wich, professor in primate biology at Liverpool John Moores University, said: ‘The apes are in more trouble than we previously thought.

‘First, the Tapanuli orangutan only retains a tiny part of its former range, where it likely became extinct because of a combination of unsustainable hunting and habitat fragmentation, and both these threats still affect the remaining populations.

‘And second, the Tapanuli is not specifically adapted to highland conditions, and should occur in a full range of habitats such as peat-swamp and lowland-dryland forests for optimal likelihood of survival in the wild.

‘The fact that this species has likely been driven to extinction in the peat-swamp forests of North Sumatra is therefore a major concern.’

The research is published in the journal Plos One.

PrevPreviousWhat is long Covid? Why some people aren’t recovering from coronavirus
NextWhatsApp is making it compulsory to share your data with FacebookNext