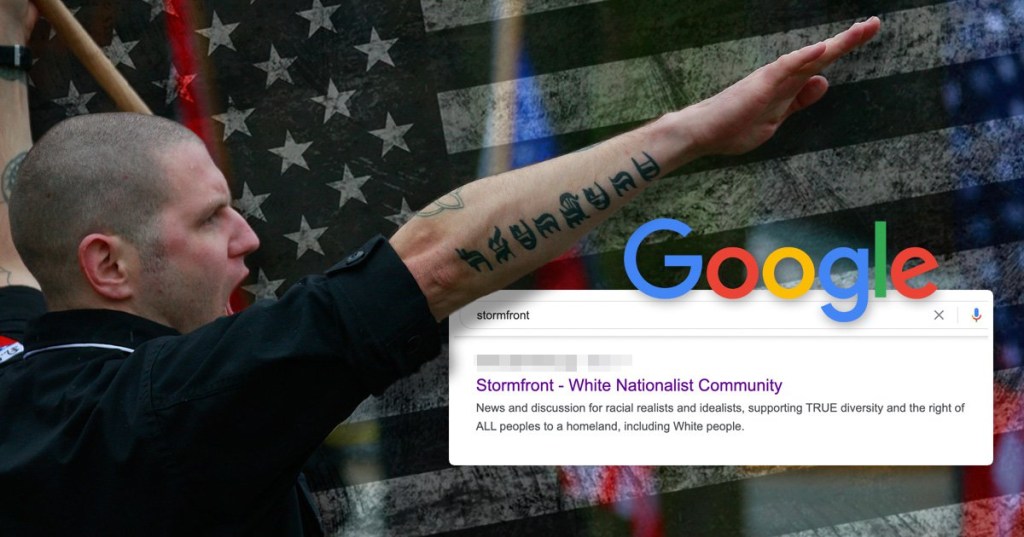 A notorious white nationalist website is still easily accessible on Google, despite posts spreading hate and calling for violence.

The forum, Stormfront, openly advocates for a state ‘reserved for whites, and whites only’.

A Metro.co.uk investigation found multiple posts denying the Holocaust, praising Hitler, insulting ‘subhuman’ people of colour, welcoming those who had been ‘kicked off Facebook’ and preparing for ‘civil war’.

An introduction to the forum for new members contains the antisemitic conspiracy theory that Jews control all governments and media to try and ‘rule the world’.

A pinned FAQ thread warned ‘white liberals’ that the quest for an ethnostate ‘is definitely going to feel like a witch hunt! When the time comes, those who are guilty of “integrationism” should do the sensible thing and flee. It will spare us all a lot of pain.’

The site’s logo features a cross and the motto: ‘White pride worldwide’.

In the wake of an attack on the US Capitol by supporters of Donald Trump, tech companies have come under renewed scrutiny for what they permit on their platforms.

The president has been banned from Facebook, Twitter, and Instagram for allegedly inciting his supporters to riot, while Google and Apple made headlines for removing ‘free speech’ social network Parler from their app stores because it had failed to remove ‘egregious content’.

Google, the world’s most widely used search engine, blocks access to Stormfront for users in France and Germany because of local laws banning Holocaust denial.

However, in other domains it has so far continued to allow access.

Posts on the site refer to the storming of the US Capitol, with some criticising it as pointless but one poster writing: ‘They should, and could have burned that stinking cesspit to the ground with the vermin in it.’

Although the guidelines of the forum say that posters are told ‘not to advocate or suggest any activity which is illegal under US law’ and should ‘avoid racial epithets’, we found widespread examples of hate speech, which is illegal in the UK.

A thread from 2020 urged people to ‘prepare for civil war’, with one poster telling people not to accept ‘Jews, Zionists, antifa, liberals, drug dealers and the other race traitors’ as human.

People openly discussed hoarding ammunition and guns, while one man said he would ‘lay my life for my leader, my race, my heritage, and the future kin […] UNCLE ADOLF NEED YOU. TODAY’.

One post said of Jewish people: ‘You cannot coexist with these monsters.’

Another poster used the number ’88’, which symbolises ‘Heil Hitler’ while one posted the thread ‘What made me a Nazi’ and was criticised by others for not using the term ‘National Socialist’.

One thread welcomes new members who have been ‘kicked off Facebook’ for their views.

It comes after the social networking site updated its terms in 2019 to announce ‘a ban on praise, support and representation of white nationalism and white separatism’.

Facebook said: ‘It’s clear that these concepts are deeply linked to organised hate groups and have no place on our services.’

Notorious Neo-Nazi site The Daily Stormer has been driven to the dark web after service providers refused to host it.

Questions have been asked about why Stormfront, set up by former Ku Klux Klan leader Don Black, has so far been able to continue to operate in plain view.

As well as being on the front page of a Google search for ‘Stormfront’, it is also high up in the results of Bing, Yahoo, and DuckDuckGo.

The site disappeared for a month in August 2017, but is now online again with its millions of posts visible to the public.

Some fear this site could act as a gateway to radicalisation for those unfamiliar with white supremacist movements, with users meeting others who could introduce them to private and even more extreme networks.

Dr Joe Mulhall, a senior researcher with Hope Not Hate, told Metro.co.uk: ‘It’s a scandal that it’s so easy to come across.

‘The idea that someone could stumble across this cesspit of vile racism and incitement to hatred and murder is one of the major problems with the way that the current online space is governed.’

‘The sort of content that’s on that platform is amongst the most extreme content you can find.

‘It’s not going to make millions of people think differently.

‘But what it might do is radicalise one person to do something really terrible.

’It only takes one person reading this sort of content on a regular basis to go and attack a mosque or synagogue or kill someone in the street.’

‘Any of the major search engines should certainly not have this sort of content anywhere near them.’

In 2014, the site was described by the Southern Poverty Law Centre (SPLC), which monitors hate groups, as the ‘murder capital of the Internet’ as so many killers had registered accounts there.

They said that mass murderer Andrers Behring Breivik was a member of the forum, and falsely claimed to have been banned.

The terrorist, who killed 77 people in Norway in 2011, said later: ‘I was never kicked out of Stormfront.

‘Instead I attacked them […] in order to protect them. An army of leftist journalists would otherwise strike hard.’

A spokesperson for Google said: ‘Hateful ideas and calls for violence are abhorrent, and our systems are designed to not expose people to this type of content if they are not explicitly looking for it.

‘We follow local laws when determining what web pages are blocked from Search.’

According to Google, their overall principle is that people should be able to find information that is within the body of legal expression, even the dark corners of it, as there may be public interest in knowing what ideas are out there instead of allowing them to loom and grow in the shadows.

They believe removing pages or sites could have unintended (and unknown) consequences in this regard, and that there are valid reasons for wanting to visit these sites, which may include providing intelligence for journalists and researchers.

The company say that it’s important to note that their search function does not host content, but rather indexes it, and this content is not proactively recommended to users.

However, it wouldn’t be possible to easily access Isis propaganda by googling ‘Islamic State’.

Despite what the company says about far right content only appearing to those who seek it out, people could find Stormfront accidentally as the website shares its name with a store in Cornwall.

Dr Mulhall said there was an ‘anomaly with the way in which tech platforms have dealt with far right extremism versus Islamist extremism’.

He said blocking extremist material wouldn’t stop it existing, but would make it harder to find for those who weren’t already involved with it.

‘The key is to stop people stumbling across it,’ he said.

‘We want to get back to the stage when a platform like Stormfront is only engaged with by someone who has consciously sought it out – who’s already involved in far right politics’.

Microsoft, Yahoo, and DuckDuckGo have not yet responded to requests for comment.

PrevPreviousZoom interview tips: How to get hired from a virtual job interview, according to the experts
NextMindfulness ‘improves mental health and wellness’ but won’t work for all, study saysNext