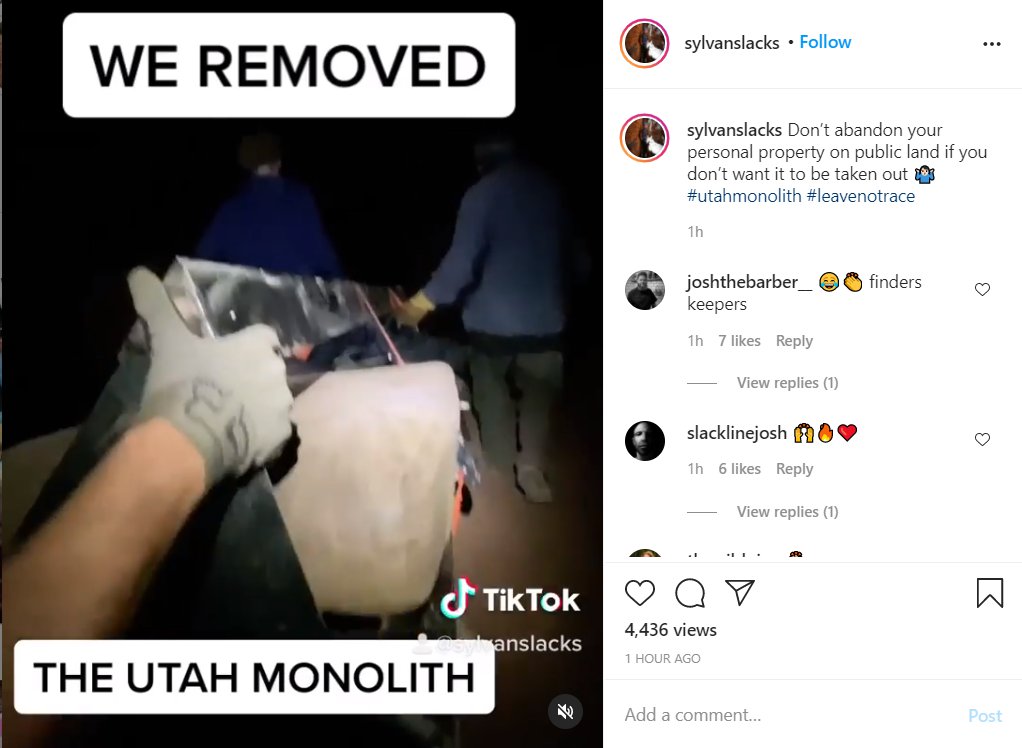 The mystery of a 12-foot metal monolith appearing in the desert in Utah has kept the internet enthralled for a couple of weeks.

The unmarked obelisk was spotted by a helicopter last month after having appeared seemingly out of nowhere. Then, just as suddenly, it disappeared overnight.

Now we know it was removed by Utah adventure tour guides who uploaded a video of themselves taking down the monolith under the cover of darkness.

The video was posted to TikTok by Sylvan Christensen and shows himself and three others pushing over the metal sculpture and strapping it to a wheelbarrow before taking it away.

The tour guides said they took the obelisk down because they were worried that the sudden interest would ruin the area with people driving, biking and flying to the location.

‘Don’t abandon your personal property on public land if you don’t want it to be taken out,’ he wrote in the caption.

Eyewitness Ross Bernards said he had been taking pictures at the monolith on Friday night when the group of men moved in to destroy it.

Bernards described how the men worked for between 10 to 15 minutes, repeatedly shoving the structure hard until it crashed to the ground.

While carrying out the vigilante demolition job, one of the men reportedly remarked, ‘This is why you don’t leave trash in the desert’.

Images of the group show the men working under the cover of darkness with torches strapped to their foreheads, wearing gloves but not face masks.

The shiny pillar was first spotted on November 18 by Utah Department of Public Safety workers surveying bighorn sheep by helicopter. Swaths of curious tourists and explorers flocked to the structure and posed for photos with the enigma, with rumours circulating it could be a message from alien life because of the similarity to Stanley Kubrick’s 2001: A Space Odyssey.

It added that any criminal investigation would be handled by the local sheriff’s office.

The exact whereabouts of the monolith was never disclosed by officials but internet sleuths quickly pinpointed its precise location, leading to a number of intrepid sightseers making the difficult journey to see it.

One of those, Matt Misbach, told the PA news agency he arrived early on November 28 to discover it had already gone.

He said: ‘I got there early Saturday morning. When I arrived there were two young men still in their sleeping bags camping at the site. They got there at 2am that morning.

‘The monolith was gone when they arrived.’

A second monolith, bearing a striking resemblance to the Utah pillar, has also appeared across the other side of the world in Romania.

At the time of writing, the second monolith is still standing.