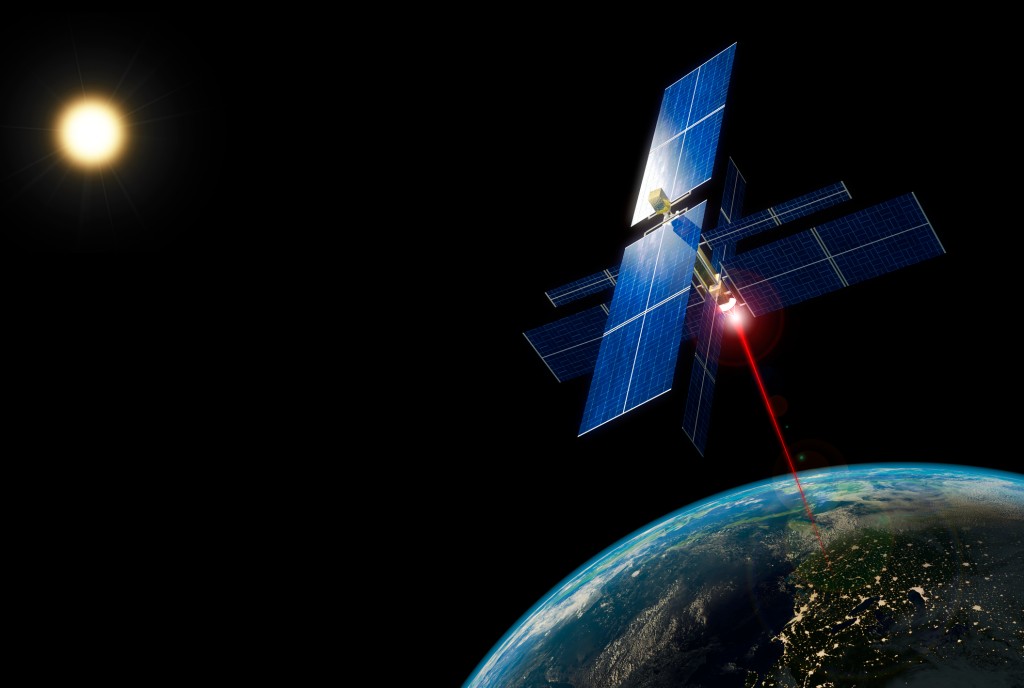 Scientists have successfully tested a floating solar panel in space that will eventually beam energy back to Earth.

The size of a computer monitor, the prototype energy harvester is a project of the US Pentagon, which scientists hope could one day power entire cities.

Named the Photovoltaic Radiofrequency Antenna Module (PRAM), the solar panel was launched in May last year, as part of the the Pentagon’s secretive X-37B unmanned drone.

Rotating around the earth every 90 minutes, PRAM is well positioned above the Earth’s atmosphere to make use of the sun’s light that doesn’t reach below.

The light above the atmosphere is of a higher frequency – and so higher energy – than the light that’s been bounced around the Earth’s gravity-bound gases.

‘We’re getting a ton of extra sunlight in space just because of that,’ co-developer Paul Jaffe told CNN.

‘Some visions have space solar matching or exceeding the largest power plants today — multiple gigawatts – so enough for a city,’ Jaffe added.

So far, PRAM can only produce enough power to power a tablet computer – but the panel is only a small prototype.

Scaled up, in both size and number, the project could transform how power is generated and distributed across the globe.

The additional power could support the largest electrical grids on Earth.

While the satellite hasn’t yet sent its harvested energy back to terra firma, the power transmission technology has been previously proven to work.

Once the beam reaches below, the waves could then be converted to carbon-free electricity.

‘The unique advantage the solar power satellites have over any other source of power is this global transmissibility,’ Jaffe said.

‘You can send power to Chicago and a fraction of a second later, if you needed, send it instead to London or Brasilia.’

A stumbling block for the project, though, could be whether it’s economically viable.

‘Those [costs] are, in the last 10 years, finally starting to come down.’

However, there are some positives to building things in space.

‘On Earth, we have this pesky gravity, which is helpful in that it keeps things in place, but is a problem when you start to build very large things, as they have to support their own weight,’ Jaffe said.

While the details of PRAM have just become public knowledge, the other purposes of the top-secret X-37B drone remain cloaked in secrecy.

The first results highlighting the solar panel’s efficacy were released in January, in IEEE Journal of Microwaves.

A joint project between the Pentagon, the Operational Energy Capability Improvement Fund and the US Naval Research Laboratory in Washington, DC, it’s unknown how much money has been earmarked for the experiment.

A final version of PRAM would likely orbit at a much higher orbit than the current test model, as sunlight is more plentiful from less time spent in the shade of the Earth.

While there would be more energy higher up, the onboard electronics would be less efficient after heating effects from the additional sunlight.

However, scientists installed onboard heaters on the current version of PRAM to try and model this effect and prove its efficacy regardless of orbital height.

‘The next logical step is to scale it up to a larger area that collects more sunlight, that converts more into microwaves,’ Jaffe said.

Could the beam be accidentally directed to the wrong place on Earth and cause untold havoc?

Not if the scientists can help it – using a technique called ‘retro-directive beam control’, the Earth’s receiver would send a signal to the space antenna so it knows exactly where to send the beam.

Jaffe also said that fears of a giant space laser created by bad actors are unwarranted, as the antenna size required for such a device would be noticed months or years before it was assembled.

He added that it would be ‘exceedingly difficult, if not impossible’ to weaponise the solar energy.