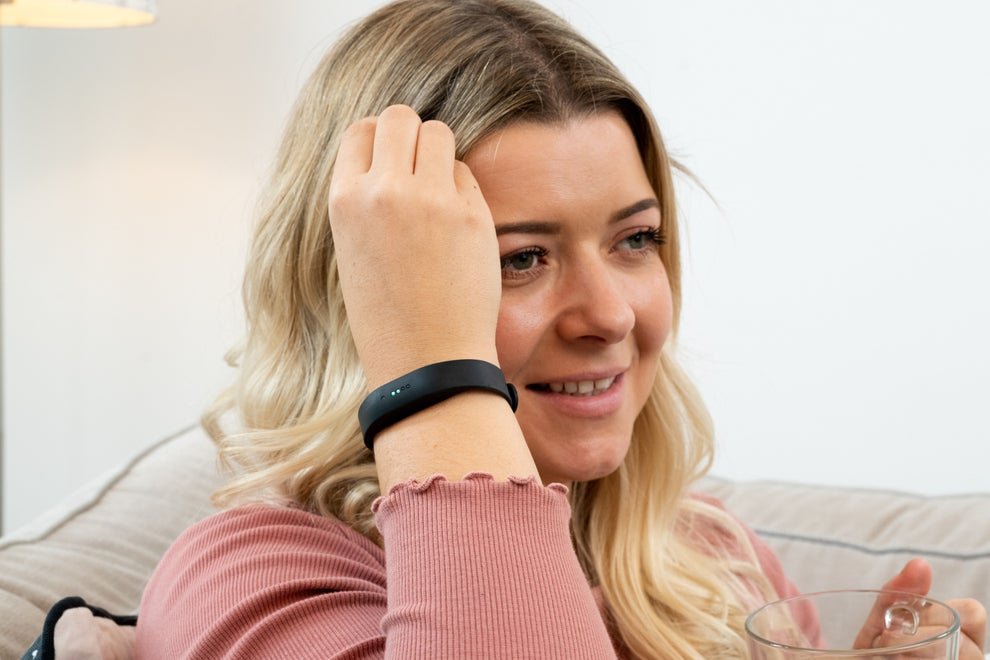 A revolutionary device to help stop the spread of Covid-19 by training us not to touch our faces is launched by a British company this week.

The Nudge wristband uses behavioural science and artificial intelligence to alert the wearer when they put their hand to their face, something we do 23 times an hour.

It has been taught to identify 1,000 separate hand movements, including dancing, waving and clapping.

The team behind Nudge, which sells for £49.99, say it can be used straight out of the box meaning it doesn’t have to be paired with a phone app or smart watch.

The band uses gesture recognition to constantly calculate hand movements and vibrates when it identifies the wearer is about to touch their face, sending them a warning.

The subtle vibrations effectively train the brain into new behaviours.

It counts the number of face touches using LED lights on the band helping the user keep track of what is often a subconscious act.

Avoiding face touching is one of the key recommendations from the World Health Organisation and the Government in the battle against Covid-19.

According to experts, most face touching is subconscious and a habit that forms in the womb, so it is difficult to break.

A study by the University of New South Wales, in Australia, has shown that on average people touch their face 23 times an hour – once every three minutes.

Research has shown that making people aware they are touching their face can reduce them doing so by 65 per cent to 95 per cent, significantly decreasing the number of potential infections.

Nudge, which has an assembly base in Reading, Berks, was invented by public health expert Luisa Zettinig, who came up with the idea at the start of the lockdown in March this year.

In the past she has developed infection control procedures and hand hygiene courses for hospitals across the globe and was determined to come up with something to help slow down the spread of coronavirus.

The 36 year old revealed she was inspired after seeing the situation her relatives found themselves in, including her 88 year old grandmother, who is in a care home in Scotland, and her father who is undergoing chemotherapy for a brain tumour.

She said: ‘Although the message is out there that it isn’t a good thing to be touching your face, changing our behaviour is difficult.

‘The challenge was to come up with a highly advanced piece of technology but at the same time make it very easy to use, affordable and accessible to everybody.

‘There is no need to go through any complicated calibration process – you simply switch Nudge on, put it on your wrist and you are ready to go.

‘We’ve taught it to recognise over 1,000 hand and arm gestures, so it will know where your hand is in relation to your face or if you’re just waving at your neighbour.

‘We think it could really help those at-risk but also those who have no choice but to carry on with some sense of normality and can’t avoid shopping or public transport, or those who work in a customer-facing role where some contact with other people can’t be avoided.

‘Whichever hand you wear it on, you can easily turn it off if you have your hands around your face, say if you’re eating or brushing your teeth.

‘I had a very personal reason for coming up with the idea as I really wanted to make a difference and one of the first people to get one of the devices will be my own father.’

The makers say Nudge could also be effective for anyone who wants to break the cycle of nail biting, skin or spot picking or hair pulling.