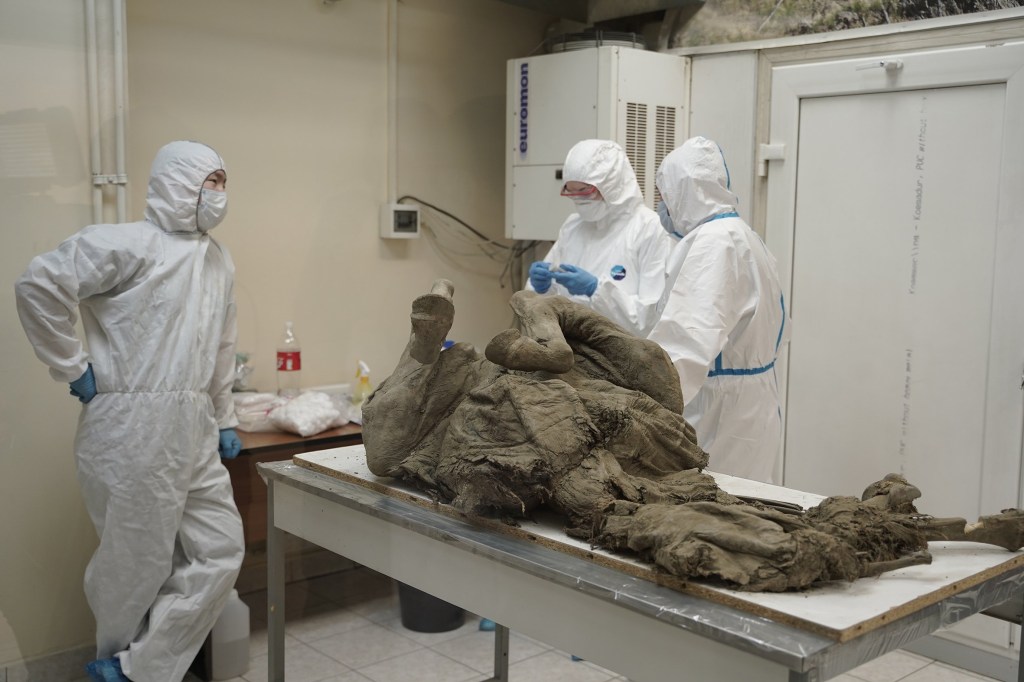 Russia is seeking to unlock unknown prehistoric viruses up to 50,000 years
old by extracting biological material from carcasses of ancient animals
frozen in permafrost.

Scientists from the Kremlin’s equivalent of Porton Down are this week
taking samples from a collection of beasts preserved in ice which have been
found in recent years.

They are working with the remains of extinct woolly mammoths and hairy rhinos,
as well as prehistoric dogs, horses, elk, rodents and hares.

The oldest animal is believed to be a 50,000 year old lemming.

The high-security facility near Novosibirsk in Siberia is currently
developing Russia’s second Covid-19 vaccine to compete with better-known
Sputnik V.

Scientists took 50 samples from ancient beasts, and expect to
gather the same number from carcasses held at the Mammoth Museum
of Russia’s North-Eastern Federal University in Yakutsk, the world’s
coldest city.

The work is separate from ongoing international research seeking to clone
species such as the woolly mammoths and rhinos back to life by using DNA
from the same sources.

Vector scientist Dr Olesya Okhlopkova said: ‘We want to find palaeo-viruses
making it possible to start the development of palaeo-virology in Russia.’

Dr Okhlopkova said they would attempt ‘whole genome sequencing, with which
scientists can obtain data on the entire biodiversity of microorganisms in
a sample.

‘If the nucleic acids were not destroyed, we will be able to obtain data on
their composition and establish how it changed, what was the evolutionary
development of events.’

They hope to understand ‘significant trends’ in the development of viruses
since prehistoric times to glean the ‘epidemiological potential of
currently existing infectious agents’.

The animals have been found over the last decade or so as permafrost has
thawed in the Arctic and subArctic.

Dr Maxim Cheprasov, acting head of Mammoth Museum, said: ‘The first find
with a selection of soft tissues was the Verkhoyansk horse in 2009.

‘The scientific value of the find lies in the fact that its complete
nuclear genome was deciphered, thanks to which the history of the origin of
the modern Yakut horse became known.’

These horses are able to survive in temperatures as low as minus 60C.

Museum scientist Dr Sergey Fedorov said: ‘The Mammoth Museum has
long-standing ties with the Vector. We hope that palaeo-viruses will be found and interesting discoveries in the world of viruses await us.’

In recent years the centre has been involved in efforts to find cures and
antidotes to killers such as bubonic plague, anthrax, ebola, hepatitis B,
HIV, SARS – and cancer.

It has developed Russia’s second Covid-19 vaccine called EpiVacCorona
which is soon to be mass produced.