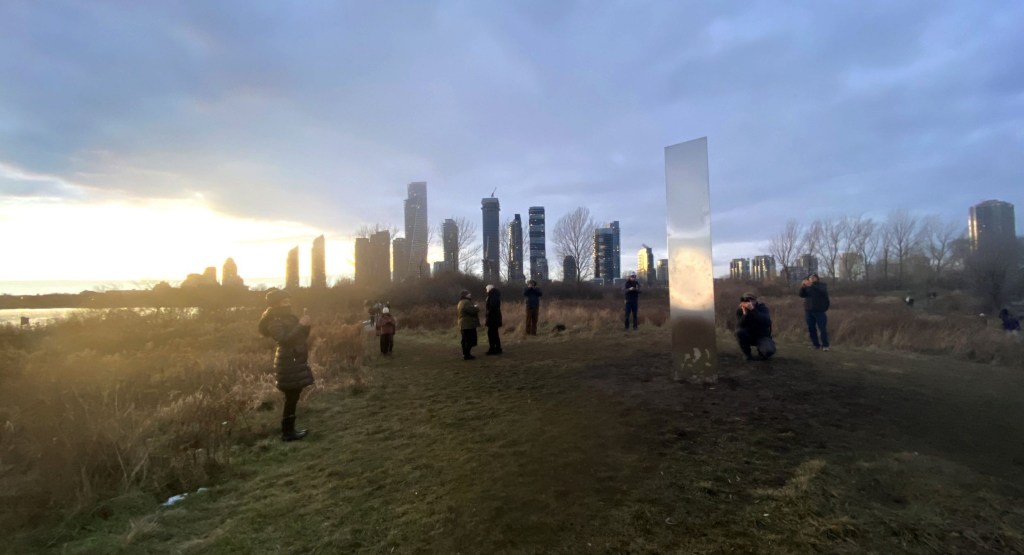 As the world welcomes in 2021, Canada is harking back to one of 2020’s strangest phenomenons – the random appearances of strange alien monoliths.

The sightings started in November 2020 and grew until it seemed like there was a new one each week.

Now, Toronto has joined in on monolith mania as one of the structures mysteriously appeared there on New Year’s Eve.

It appeared in the city’s Humber Bay Shores neighbourhood and was discovered on Thursday morning. Local reports say it resembles the other monoliths: standing 12-feet tall and constructed from reflective silver metal. The reports also suggest it’s hollow.

‘Humber Bay got its own monolith overnight,’ one resident posted in the Humber Bay Shores Facebook group.

This isn’t the first monolith to appear in Canada. Others have apparently sprung up in Manitoba and British Colombia.

But the Canadians aren’t buying into the idea they’ve been visited by interstellar travellers. Instead, they think it’s more likely the monolith is some kind of art project.

According to local media CP24, the Toronto monolith ‘may be a promotion for an upcoming film, or that the city placed it there as a piece of public art.

‘Regardless of the theory, most residents said they were intrigued by the structure and happy to see it provoking conversation not related to the pandemic.

‘At the same time, others expressed a little bit of concern that the monolith will bring people from across the city into the neighbourhood at a time where they should be sticking to their own community due to COVID-19.’

The Toronto monolith is continuing a brief but memorable craze that began in the desert in November.

The initial monolith was discovered in Utah in the United States on November 18.

Swathes of curious tourists and explorers flocked to the structure and posed for photos with the enigma, with rumours circulating it could be a message from alien life because of the similarity to Stanley Kubrick’s 2001: A Space Odyssey.

In the following weeks, the news went viral and others began to appear in places around the world.

The metal obelisk was around 10 to 12 feet in height and had been embedded into the red earth. It was removed under cover of darkness by local adventure tour guides.

Our favourite monolith? That would have to be a toss up between the gold one in Colombia and the one that some bloke thought he saw in the sky.

What’s your favourite monolith memory? Let us know in the comments section below.