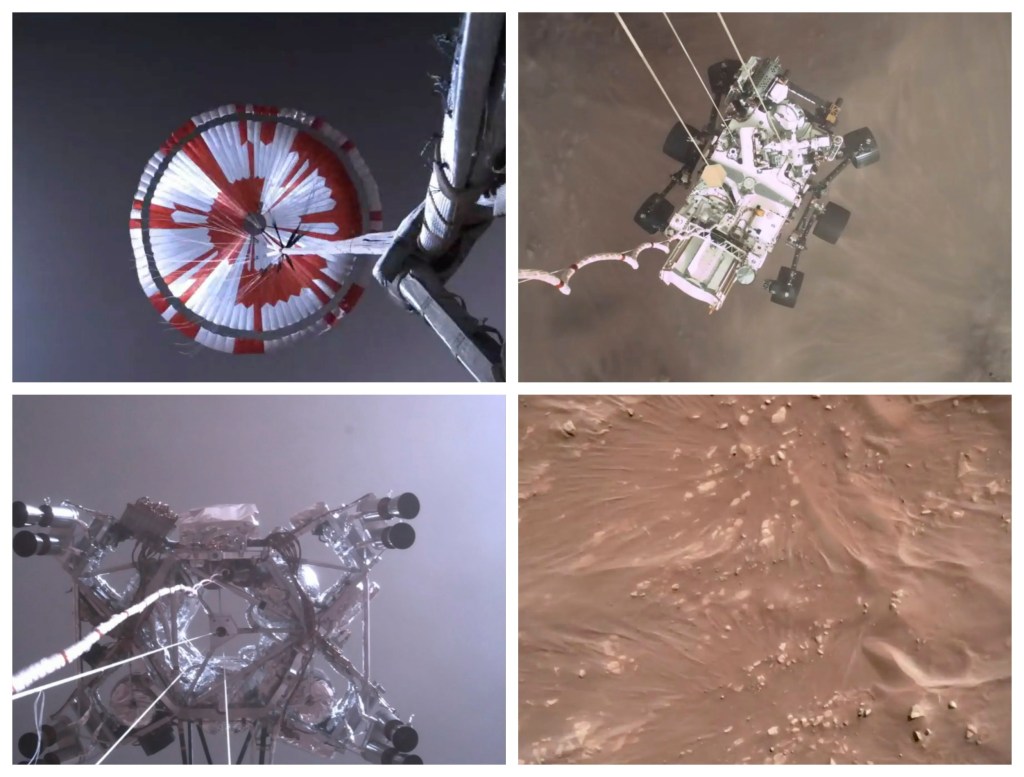 If you ever wanted to know what it would be like to descend to the surface of the Red Planet, now you can see – and even listen to it.

Nasa’s Mars Perseverance filmed itself getting slowly closer to landing, in such detail that dust on the surface being disturbed is visible.

The first-of-its kind video, a minute long, was taken while the rover landed on the planet on February 18.

A microphone on board captured a gust of wind on the red planet, and the sounds of Perseverance – the first ever audio from the Martian surface.

The agency also released new images the rover took including a panoramic image of the planet from the landing site showing the red rocky surface with mountains and a delta visible in the distance.

After the rover, which blasted off from Earth last July, entered the Martian atmosphere there were ‘seven minutes of terror’ as it made its way to the surface.

It took more than 11 minutes for news of the safe landing to reach Earth, arriving at just before 9pm on Thursday.

The rover – a scientific laboratory the size of a car – is on a mission to search for signs of ancient life and explore and collect samples for future return to Earth from diverse environments on Mars.

Perseverance will spend the coming years scouring for signs of ancient microbial life in a mission that will bring back samples from Mars to Earth and prepare the way for future human visitors.

Scientists know that 3.5 billion years ago Jezero was the site of a large lake, complete with its own delta.

They believe that while the water may be long gone, somewhere within the crater, or maybe along its 2,000-foot-tall (610 metre) rim, evidence that life once existed there could be waiting.

Perseverance will gather rock and soil samples using its drill and will store the sample cores in tubes on the Martian surface ready for a return mission to bring around 30 samples to Earth in the early 2030s.

It will also trial technologies to help astronauts make future expeditions to Mars.

These include testing a method for producing oxygen from the Martian atmosphere, identifying other resources such as subsurface water, and improving landing techniques.

They also involve characterising weather and other environmental conditions that could affect future astronauts living and working on Mars.