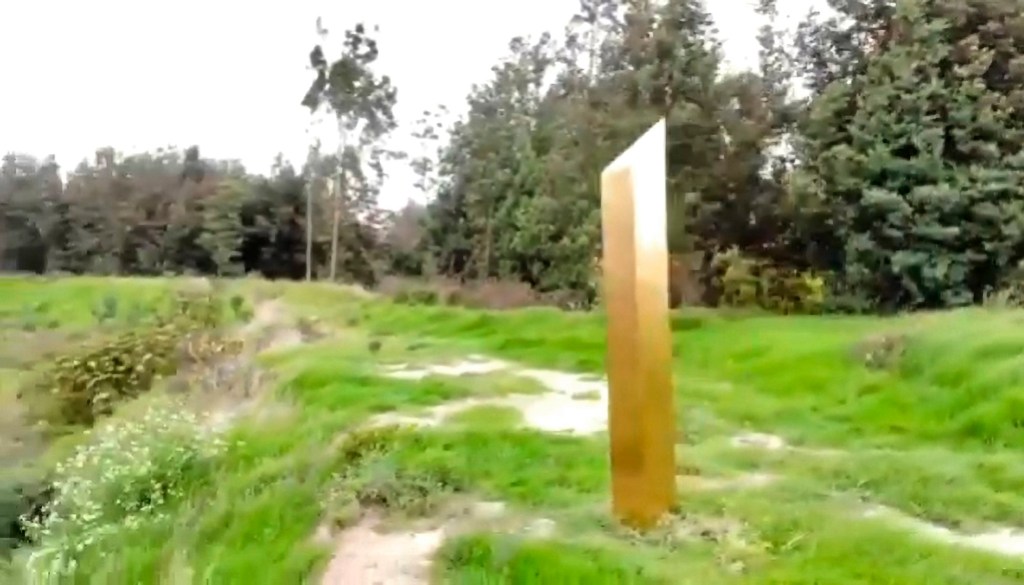 A new monolith has appeared in Colombia, but unlike others appearing around the world, this one is gold.

The latest development in the ongoing mystery has some people wondering if this is the ‘master monolith’ that controls all the others.

This is the ninth structure to crop up around the world, following the initial sighting of a monolith in Utah that resembled the one from Stanley Kubrick’s 2001: A Space Odyssey.

Sightings of other monoliths have been recorded on the Isle of Wight, California, Pennsylvania, New Mexico and Joshua Tree in the USA and in Romania and the Netherlands in Europe.

But unlike all those other metal pillars, this latest one is coloured gold.

It was discovered in the municipality of Chia in the department of Cundinamarca in the centre of the South American country.

Pictures of the gold monolith have flooded social media as people across the globe puzzle over the meaning of the mysterious structures.

Some residents believe this golden monolith is the ‘monolith that controls them all.

It was found standing out in a field with no clue about who – or what – placed it there.

The authorities in the area have not commented on the sudden appearance of the gold alien structure.

Some of the other monoliths have disappeared a few days after being spotted. In the case of the original Utah monolith, it was revealed that local adventure tour guides removed it under cover of darkness.

The most plausible explanation we have is that the monoliths are some form of art project. A New Mexico-based art collective – called The Most Famous Artist – claimed that they were responsible for erecting the US monoliths in Utah and California.

But that doesn’t explain how similar structures appeared across the world at the very same time.

Responding to the Isle of Wight structure, group founder Matty Mo said: ‘The monolith is out of my control at this point. Godspeed to all the aliens working hard around the globe to propagate the myth.’

Meanwhile, global brands like McDonald’s, Amazon and Jeep have all jumped on the bandwagon and posted some amusing explanations for the sudden appearance of the alien monoliths.

It remains to be seen if there are still more undiscovered monoliths hiding in locations around the planet.