‘Giant’ shark species found to glow in the dark 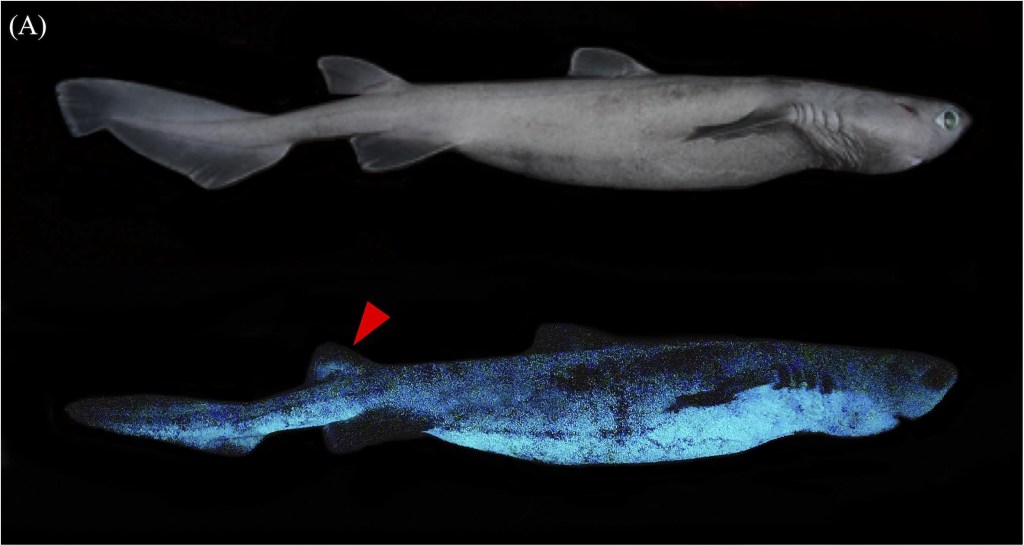 Scientists have discovered three new species of shark that glow while they swim through the murky depths below.

The sharks swim in an environment short on hiding spots and use their glowing skin as camouflage to hide from predators or other threats.

While the species have been known to science for longer, this is the first time they have been confirmed to ‘bioluminesce’ – or glow in the dark.

Found in a segment of ocean termed the ‘twilight zone’, between 200 and 1000 metres below sea level, the sharks swim around in relative darkness because sunlight barely penetrates at that depth.

The kitefin shark is the largest of the three glowing predators, normally found swimming around 300m under the ocean surface, hunting smaller sharks, ground fish and crustaceans.

Kitefins, which can grow to an almost human-size six feet, are the largest known sea creature to glow in the dark, and are referred to by researchers as a ‘giant luminous shark’.

While other aquatic life has been found to bioluminesce, this is the first time the phenomenon has been seen in sharks.

Bioluminescence comes from light-producing cells named photophores, thousands of which are studded within the sharks’ skin.

Researchers think the underwater light might be helpful to help the sharks hide from predators or other threats.

However, the kitefin’s relative size means the list of potential predators is small – researchers are continuing to study the exact use of their bioluminescence.

‘Studying light emission of the kitefin shark, the blackbelly lanternshark, and the southern lanternshark,’ the researchers said, ‘might increase our understanding of their bioluminescence functions, and possible prey-predation relationships between these species.’

In the study, released in Frontiers in Marine Science, the researchers added: ‘Bioluminescence has often been seen as a spectacular yet uncommon event at sea but considering the vastness of the deep sea and the occurrence of luminous organisms in this zone, it is now more and more obvious that producing light at depth must play an important role structuring the biggest ecosystem on our planet.’

UC Louvain’s Jerome Mallefet, one of the lead researchers on the project told New Zealand news website Stuff that 57 out of 540 known shark species could produce bioluminescent light.