From smart bins to hologram calls: How 5G is changing the way we live and work 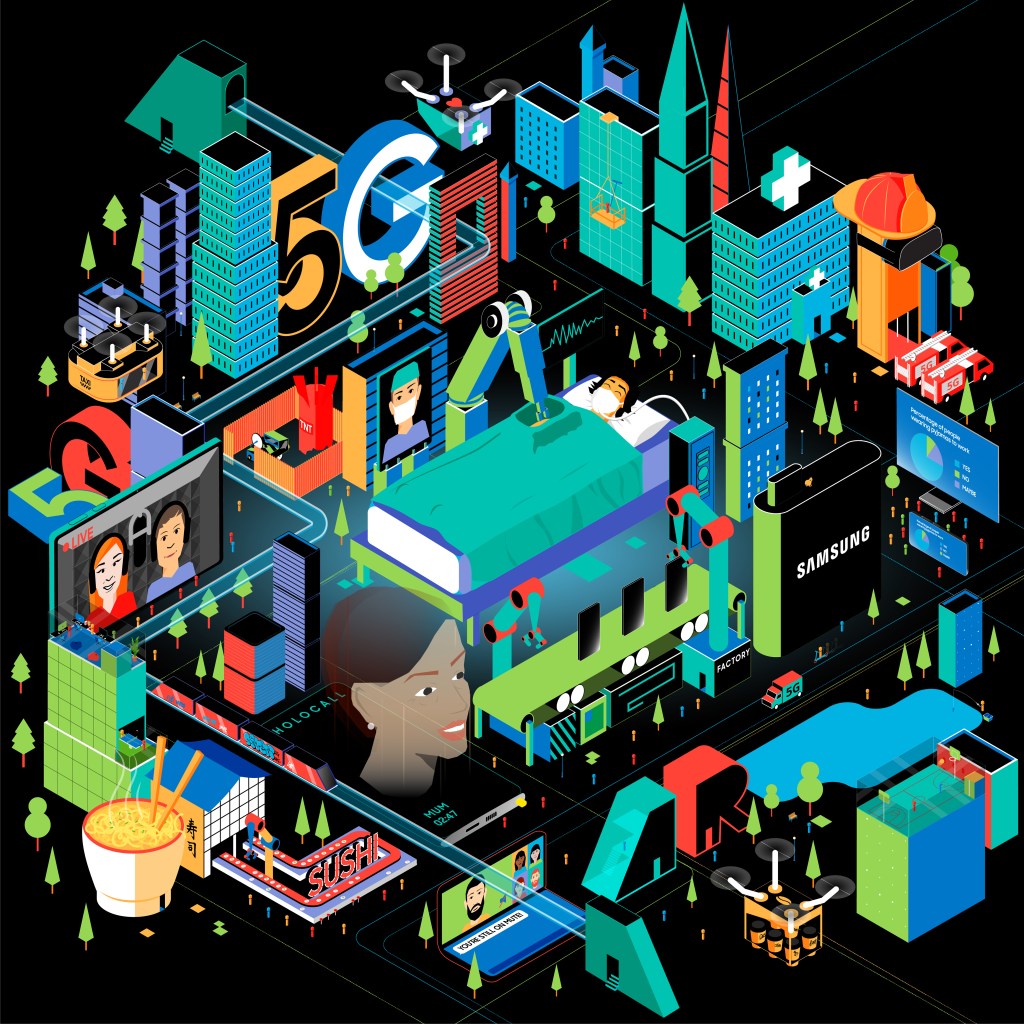 ‘Imagine bins that could sort out the recycling themselves – or alert the council when they were ready to be collected,’ says mathematician Dr Hannah Fry.

‘Smart bins’ might sound like science fiction, but they’re just one of the weird and wonderful new technologies explored by Hannah and co-presenter comedian Suzi Ruffell in a new podcast on 5G-powered tech, ‘Whatever Next?’

In two new episodes, Hannah and Suzi explore how 5G is changing the way we do our jobs (and unwind at home), with technologies such as hologram-style 3D calls, smart bins and even smart toilets.

‘It’s a version of the future I can get behind,’ laughs Hannah. ‘A smart city. Where a bin chases a rubbish truck down the street.’

Many of the technologies Hannah and Suzi encounter are already changing people’s lives right now.

In the ‘home’ episode, Hannah and Suzi speak to locals in Orkney, where a 5G network has replaced wired internet (and brought films, music and social media to entertainment-starved locals).

‘Faster connectivity has had a massive impact,’ says Suzi.

‘Apparently BBC’s Asian Network is one of the most popular stations now on the Island of Stronsay.’

New ‘volumetric’ images and video can be used to bring 3D models to life, or for hologram-like 3D video calls.

Suzi says, ‘There are so many benefits to a hologram call. You can walk around a picture and see it from any angle.

‘You feel like you’re actually in the room with the person. You also have the added benefits of things like cutting out travel time.’

The technology can also be used to bring 3D models of houses to life, Suzi explains, or to show off the shapes of proteins.

‘‘It can help very brainy people do their jobs,’ Suzi says.

From smart cities to smart toilets

‘With 5G cities, everything is connected,’ Suzi says. ‘Cars talk to lamposts, talk to road signs, talk to you, and everyone else.’

The duo learn how sensors installed on lampposts can monitor air quality, and how the London Underground uses Wi-Fi to monitor how passengers actually use the network.

Suzi says, ‘if you know where the people are, you can share that information with other passengers, making it easier for everyone to avoid crowded trains.’

Suzi and Hannah also talk to Professor Jeremy Baumberg of the University of Cambridge, about the emerging technology of smart toilets.

Professor Baumberg’s team are developing technology to ‘read’ people’s urine and monitor for signs of ill health – which could one day be built into the toilet in our homes.

Hannah says, ‘Once you’ve got lots of samples, you can look for connections between people’s health and the molecules found in their urine.’

It’s not quite, ‘Mirror, mirror on the wall,’ but smart mirrors which let you test out new looks are becoming a reality, Hannah and Suzi learn.

Suzi and Hannah speak to Professor Yvonne Rogers of UCL about augmented reality technology which is turning ordinary mirrors ‘magical’.

The mirror allows people to apply makeup to their face instantly, allowing you to experiment without having anything to wipe off.

Hannah says, ‘It works out the contours of your face and shows it as though it had makeup on.’

How 5G is saving lives

‘When you are a fireman, knowing where you are in a building, and knowing where other people are, is a matter of life and death,’ says Hannah.

In the ‘work’ episode, Hannah and Suzi check out an augmented reality headset which lets firemen see clearly through smoke in burning buildings.

Hannah says, ‘There’s a camera that uses infrared to see through the smoke, and projects it onto the visor in front of them.’

‘One of the trickiest dilemmas that many people with elderly relatives have is finding that balance between keeping them safe and maintaining their independence,’ says Hannah.

Hannah and Suzi speak to Louise Rogerson the founder and COO of Howz, a monitoring system built to help older people live independently.

Hannah says, ‘What Howz does is to use the movement of a person within their house to create a routine. If that routine is disturbed for some reason, their next of kin is alerted.’

Listen to the ‘Remote control surgeons’ and ‘Smart Rubbish’ episodes of the ‘Whatever Next?’ podcast on your smart speaker or smartphone via Spotify, Google Podcasts and Apple podcasts.