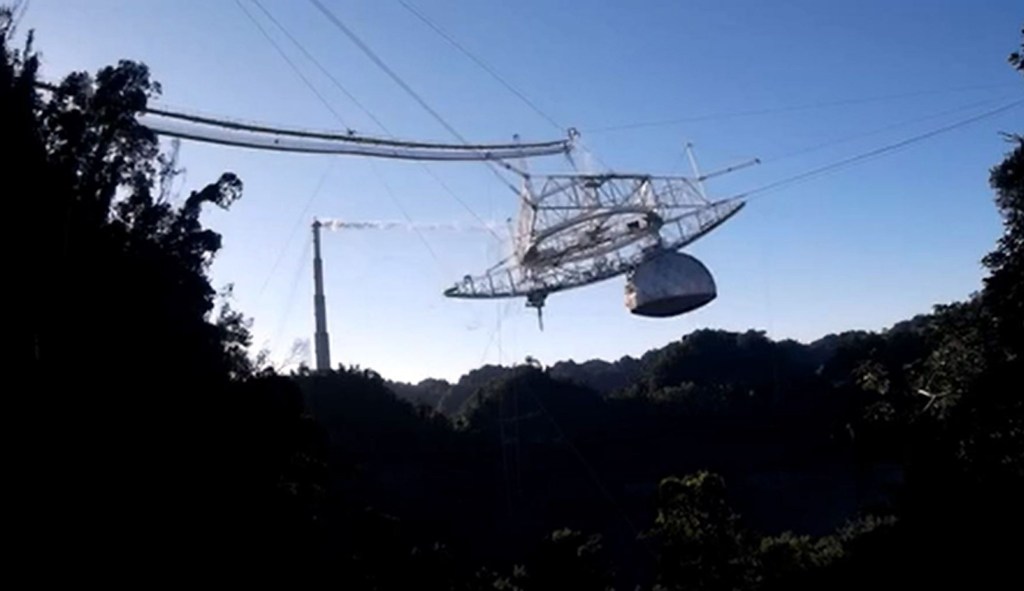 Earlier this week the famous Arecibo Observatory in Puerto Rico collapsed in on itself, causing a ricochet around the scientific community.

Now, footage has been released showing the moment the cables snapped, causing the 900-tonne platform to fall 400 feet into the reflector dish below.

The video shows platform swaying before the cable snaps. The deafening crash is heard as the 57-year-old structure falls apart.

A second video feed was shot by a drone filming the cables at the top of the support tower. It shows the frayed wires finally giving way and flying out of its housing, creating a cloud of smoke and debris.

The collapse happened at 8am local time on Tuesday.

‘It sounded like a rumble. I knew exactly what it was,’ said Jonathan Friedman, who worked for 26 years as a senior research associate at the observatory and still lives near it.

‘I was screaming. Personally, I was out of control…. I don’t have words to express it. It’s a very deep, terrible feeling.’

The news of the telescope’s destruction reverberated around the world.

Its other claim to fame was featuring as the villain’s lair in the 1995 James Bond film GoldenEye.

The giant telescope was also used in programs that search for extraterrestrial intelligence (SETI) because its location provided scientists access to one-third of the cosmos.

The telescope was built in the 1960s with money from the Defence Department amid a push to develop anti-ballistic missile defences.

In its 57 years of operation, it endured hurricanes, endless humidity and a recent string of strong earthquakes.