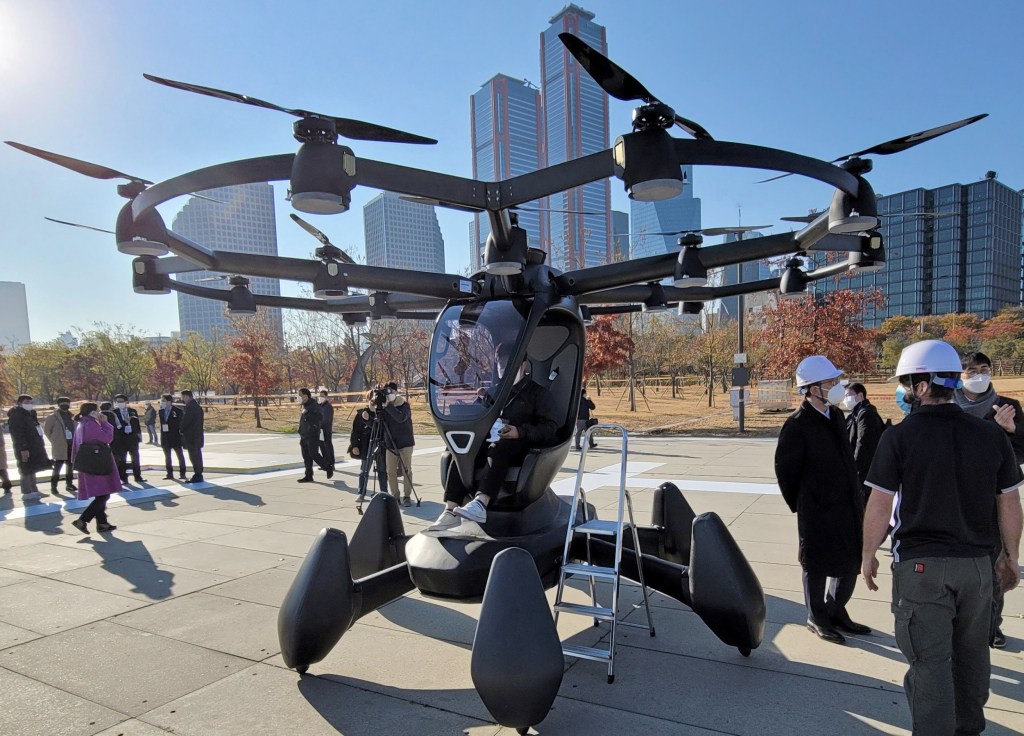 If you thought this century wasn’t futuristic enough, buckle up: flying robot taxis.

South Korea’s transport ministry are testing an unmanned air taxi service in Seoul, looking to launch as soon as 2025.

The Korean government has already tested six drone taxis on the outskirts of Seoul, but they’re now looking to test the service in the densely populated Seoul centre for the first time.

The Blade Runner-style drones are made by Chinese pilotless air taxi outfit Ehang, and weigh around 650kg per vehicle.

While the taxis themselves are Chinese-made, South Korea are developing their own ‘K-drone traffic management system’ with state financing.

This is because South Korea plans to open ten air taxi terminals by 2030.

The ministry for transport expects the urban air mobility market to be worth billions of pounds by 2040, focusing on 18-30-mile trips alongside buses, the city’s subway system and other forms of public transport.

The company said it is seeking to establish a “verti-hub,” the terminal for the takeoff and landing of air taxis, at Gimpo International Airport in western Seoul in cooperation with Korea Airports Corp.

The verti-hub, if built, will be the world’s first such facility for drone taxis, according to Hanwha Systems.

Air taxis equipped with electric vertical takeoff and landing (eVTOL) functions are also expected to be available in some cities of the United States and Europe for commercial services by 2025.

In September, the ministry tested an autonomous drone food delivery service amid the rising non-contact trend in the wake of the COVID-19 pandemic in Sejong City, an administrative hub 130 km southeast of Seoul.

In Sejong, five drones delivered meals and other products to people at homes two to three kilometers away across a lake and at high-rise buildings within 10 minutes.