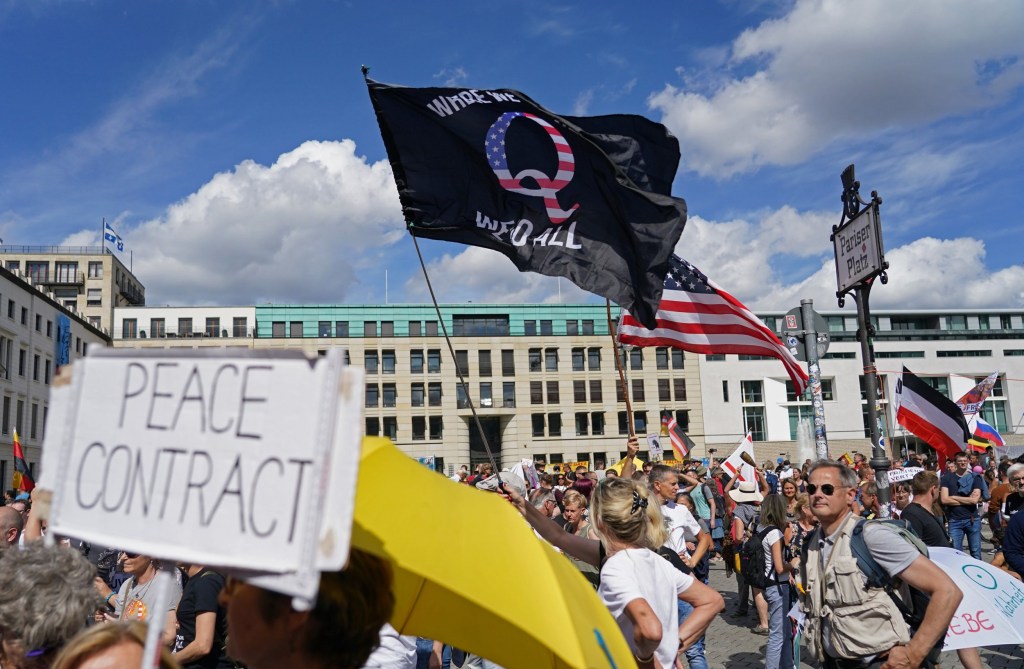 Facebook has announced that it will be removing any pages or groups representing conspiracy group QAnon.

The social media company, which also owns Instagram, said in a statement tonight: ‘Starting today, we will remove any Facebook Pages, Groups and Instagram accounts representing QAnon, even if they contain no violent content.

QAnon is a wide-ranging conspiracy theory which claims that there is a cabal of Satan-worshipping paedophiles in government, business and the media, being fought by Donald Trump.

It has gained traction within the ‘alt-right’ and is linked to anti-vaccine and 5G beliefs.

On August 19, Facebook announced new measures to curb the spread of QAnon posts, saying it would disrupt militarised social movements from operating on its platform.

Within a month they had removed over 1,500 pages and groups for QAnon containing discussions of potential violence, a spokesman said.

‘But we believe these efforts need to be strengthened when addressing QAnon,’ they added.

‘We are starting to enforce this updated policy today and are removing content accordingly, but this work will take time and need to continue in the coming days and weeks.

‘Our Dangerous Organizations Operations team will continue to enforce this policy and proactively detect content for removal instead of relying on user reports.

‘We’ve been vigilant in enforcing our policy and studying its impact on the platform but we’ve seen several issues that led to today’s update.

‘For example, while we’ve removed QAnon content that celebrates and supports violence, we’ve seen other QAnon content tied to different forms of real world harm, including recent claims that the west coast wildfires were started by certain groups, which diverted attention of local officials from fighting the fires and protecting the public.

‘Additionally, QAnon messaging changes very quickly and we see networks of supporters build an audience with one message and then quickly pivot to another. We aim to combat this more effectively with this update that strengthens and expands our enforcement against the conspiracy theory movement.’

Get in touch with our news team by emailing us at webnews@metro.co.uk.

For more stories like this, check our news page.