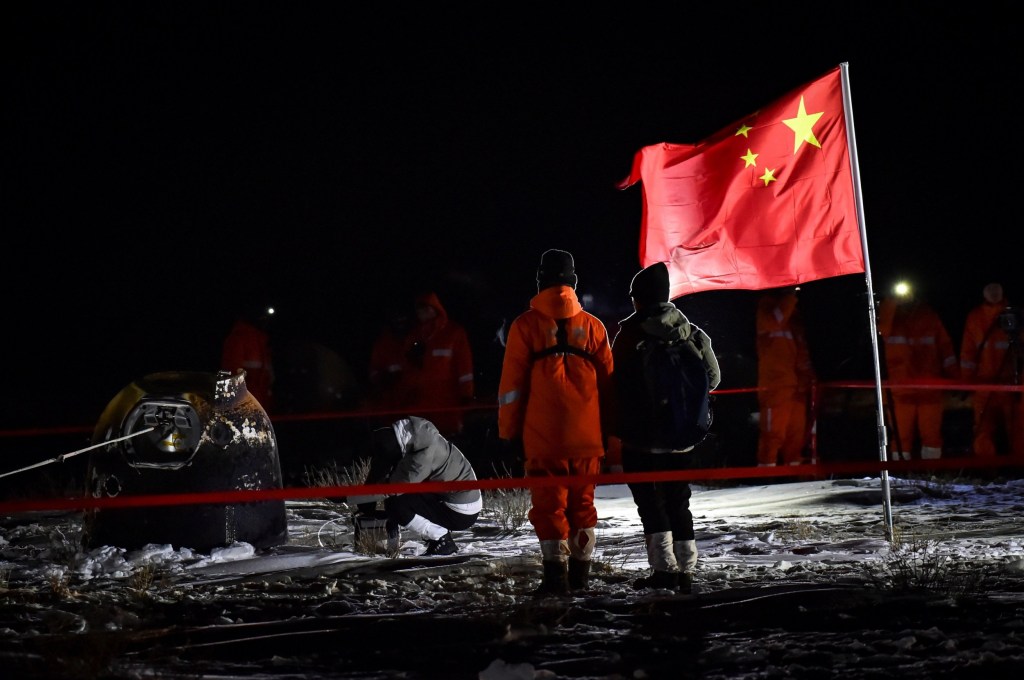 China’s Chang’e 5 spacecraft has brought back lunar rocks to Earth, the first sample of moon material since 1976.

Spending just two days on the moon’s -173°C surface, from the 1st to 3rd of December, the Chinese mission collected about two kilograms of moon rock.

Yesterday, a section of the spacecraft carrying the sample touched down in Inner Mongolia, just after 01:30 local time on Thursday.

The last time a lunar sample was collected was in 1976, when the Soviet Luna 24 probe made the long trek.

Commentators have said the mission’s success is a sign of the once impoverished nation’s capacity for space travel.

In a sign of nationalistic pride, Chinese officials placed a flag of China in the snow-topped area where the capsule landed, which is the same location that Chinese astronauts return from space.

Made up of a mixture of rocks and soil, the sample is actually in two parts: one collected from the moon’s surface and the other from two metres underground.

While the 2kg sample is hugely important for science, it is orders of magnitude less than the near 400kg of lunar material brought back by the American Apollo missions and Soviet Luna landers.

However, samples in the past have been from relatively old sections of the lunar surface (more than three billion years).

The Chang’e 5 mission targeted an area of the moon with high volcanic activity in the northwest section of the moon’s Earth-facing side.

Samples from this region, named Mons Rümker, should give greater insight to the internal construction of the Moon.

It will also help scientists calibrate more finely the ‘chronometer’ used to calculate the age of the surfaces of other Solar System planets.

The technique relies on correlating the number of craters a planet has with various samples with confirmed ages – but the greater number of samples, the more accurate the forecast.

Once the samples were collected, they were loaded into a special ‘ascent’ craft, which reunited with the orbiting Chang’e ship hovering above the moon.

This is the first time two spacecraft have docked in a completely automated way outside the Earth’s orbit.

The sample-carrying capsule then hitched a ride on the return spacecraft, being released above the Earth’s atmosphere and slowly reducing its speed until it landed in Mongolia.

Scientists slowed down the spacecraft by initially ‘skipping’ the atmosphere, much like a stone skimmed across a lake.

Though a portion of the lunar material will be kept at Hunan University in Changsha, China, the deputy head of the country’s space agency has announced data and samples will be shared with international researchers, based on international cooperation conventions.

The sample will be analysed for the make-up and age of the rocks, from which scientists can infer how the lunar and space environment has changed over time.

While we’ve had to wait more than 40 years to go back to the Moon, we shouldn’t have to wait so long again.

America is planning to land astronauts on the moon in less than five years time. Before that, lunar robots will land to scope out the terrain.

These robots will be sent out by a number of national space agencies, as well as some commercial outfits.