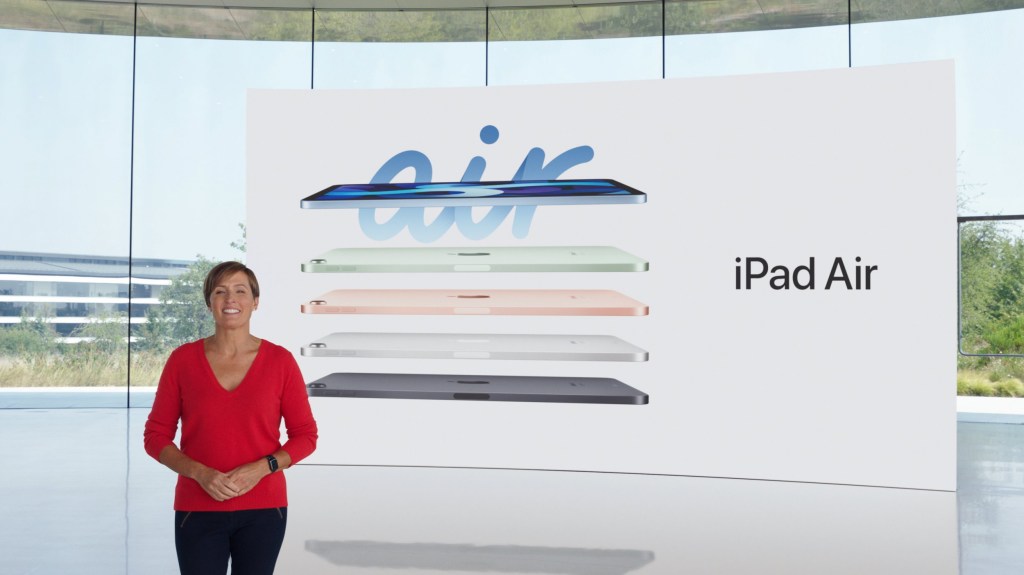 Apple has announced an updated version of the iPad Air that borrows heavily from the excellent iPad Pro – without being quite as expensive.

The revamped iPad Air (the company’s mid-range tablet between the regular iPad and the Pro) now has slimmer bezels and a more squared-off design. Despite having the same footprint as the original iPad Air, the new design crams in a larger 10.9-inch Liquid Retina display with a 2,360 x 1,640 pixel resolution.

The new design is only 6.1mm thin and, as Apple points out, is made completely from 100% recycled aluminium.

Apple has kept the TouchID fingerprint scanner rather than shifting to the FaceID unlock method of the iPad Pro. But in order to keep the design as svelte as possible, the new TouchID sensor is located in the power button.

The new iPad Air will also support the second generation Apple Pencil (the same as the Pro) and Apple has also made the switch from the custom Lightning port to a standard USB-C port on the base of the tablet. This allows for up to 5Gbps data transfer, which Apple says is 10 times faster for connecting to cameras, hard drives, and external monitors up to 4K.

A big part of the upgrade for the new iPad Air comes in the form of the A14 Bionic processor which, Apple says, delivers a 40% performance increase over the last iPad Air. The A14 Bionic includes a new 16-core Neural Engine that is twice as fast, and capable of performing up to 11 trillion operations per second.

There are two different choices of iPad Air – either just the WiFi model or the WiFi and cellular version, the latter of which allows you to throw in a SIM card and use it out and about. Prices start at £579 for the WiFi version and £709 for the cellular model. That grants you 64GB of storage in both cases although a more expensive version with 256GB of storage will also be available.

Alongside the iPad Air, Apple also refreshed its regular 10.2-inch iPad with a new A12 Bionic processor that first appeared with the iPhone XS a couple of years ago. The refreshed iPad – known as iPad 8th generation – can now use Apple’s ‘Neural Engine’ which should bring twice the graphical performance for things like gaming.

The eight-generation iPad comes in either space gray, silver or gold and with a choice of either 32GB or 128GB of storage. The rest of the stuff is the same here – it still uses the first generation Apple Pencil and sticks with the Lightning connector.

‘With its beautiful 10.2-inch Retina display, the performance boost from the A12 Bionic, great cameras, and so much more, the new iPad is an incredible value at a time when, more than ever, our customers need powerful and versatile ways to work, play, learn, and connect with loved ones,’ said Joswiak.

This iPad keeps the starting price of £329 for the WiFi model and £459 for the Wi-Fi + cellular model.

Both the iPad eighth generation is available to pre-order now and will be in stores on Friday, while the iPad Air will arrive at some point next month.