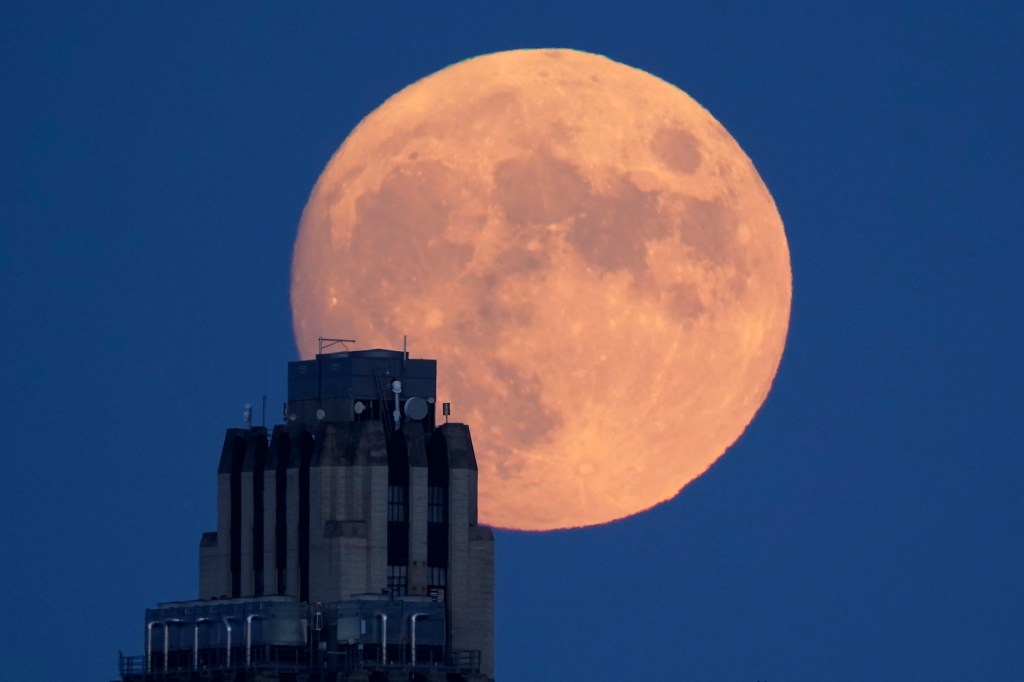 The March full moon is nearly upon us, and will light up the night sky above the UK at the weekend.

This Sunday (March 28), we will see the appearance of the full ‘Worm Moon’ which, as it happens, is also a ‘supermoon’.

It’s one of two official supermoons in 2021. These are ever-so-slightly closer to Earth than a regular full moon and therefore appear (fractionally) bigger in the night sky.

The other full supermoon will take place right after this one, in April 2021.

Although the full moon in March has come to be known as the Worm Moon, there are a number of other names for it. You may hear it referred to as the Crow Moon, Sap Moon, Crust Moon, Lenten Moon and Wind Moon.

Super Worm Moon 2021: Where does the name come from?

Royal Observatory astronomer Emily Drabek-Maunder explains: ‘The March full moon is known as the worm moon, named after earthworms that emerge towards the beginning of spring as the ground thaws.’

‘Traditionally, monthly full moons are named from Native American tradition, but many also have Anglo-Saxon and Germanic origins.’

‘From those different origins, the March full moon has also been called the chaste moon, death moon, crust moon and even the sap moon after sap flowing from sugar maple trees.’

After the howling of wolves that would often be heard outside Native American villages in January, the wolf moon got its name.

The cold temperatures mean frequent snow. Also known as the Hunger moon because the conditions affected the ability to hunt for food.

Earthworms begin to rear their heads once the temperature warms up in March.

When flowers began to appear in April, the name was given to this moon due to the herb moss pink and wild ground phlox, widespread flowers that blossom early in the spring.

Flowers are in full bloom by May, so the moon was given this name for the month.

In June, strawberry picking season is at its peak.

This month is the season for bucks to start growing antlers covered in velvety hair.

The August moon was named by fishing tribes due to the ready availability of sturgeon during this month.

Native Americans marked this month as the harvest moon due to it marking when corn is meant to be harvested.

Hunters found it easiest to ride over fields during this month, and animals were spotted more quickly.

Tribes set time aside to make beaver traps as the creatures prepared for winter, in the hope of securing a supply of fur for the colder months.

The month where winter is the strongest, with temperatures plummeting.

Thankfully, there won’t be any problems in locating the moon in the night sky this Sunday – it’s the biggest, brightest thing up there.

Remember that the clocks are set to change, so this could alter when you get out to appreciate the full moon.

You’ll be able to see it throughout the night, but the best time to see it will be in the early hours of Monday morning, when the night sky is at its darkest. This is when you should be getting out the camera for the best shots.

However, there are a few tips that you can employ to make sure you get the best view – handily compiled by Parkdean Resorts.

The further up you are, the better your chance of a clear sky to see the stars.

Take a hike in your local area and explore the surroundings to find the perfect stargazing spot!

The further you are away from light pollution the better chance you’ll have of seeing the stars. Moons always rise in the east and set in the west – so follow this direction in your search.

Turn off the lights

For those stargazing from the comfort of their homes, turning off the lights indoors can improve the visibility of the night sky, so long as you’re not afraid of the dark!

Artificial light can make it harder to see stars in the sky so make sure wherever you are is as dark as possible.

Choose a night with clear skies

Choose a night when clear skies are expected for the best chances of seeing the stars.

While the Worm Moon officially appears on Sunday night, it will look big and full on the nights either side of that date.

Research what you’re looking at

Star Chart allows you to point the camera at the night sky and will tell you exactly what is up there!

Use the Time and Date website for the best chance of spotting the planets!

Timeanddate.com allows you to input your location, before generating information about when the planets are most visible!

With lots of helpful information about what’s in the universe, this is a great way to educate the family about the wonders of space.

What is a supermoon?

Astrologer Richard Nolle first defined the term supermoon in 1979 as he explained that the phenomenon ‘is a new or full moon which occurs with the moon at or near (within 90% of) its closest approach to Earth in a given orbit.’

In order for a moon to be propelled to supermoon stardom it would have to be 226,000 miles away from the Earth.

A supermoon usually occurs once every 14 full moons – which is just over one per year.

When the moon is closer to the Earth, the effects can be felt through higher tide levels due to the moon’s gravitational pull on our water.

MORE : China and Russia are joining forces to build a moon base