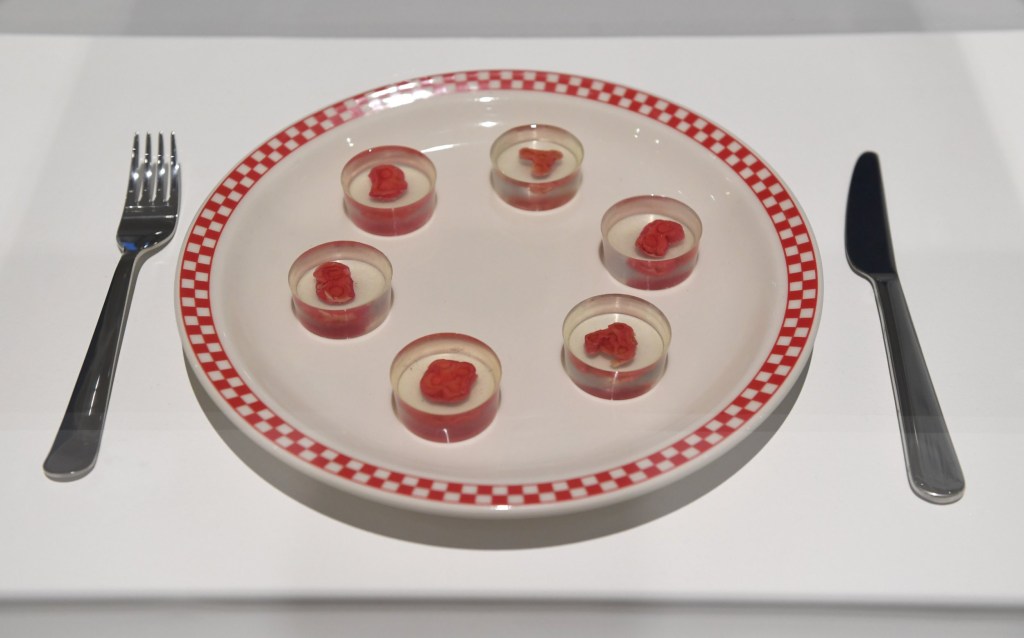 If you’re feeling a bit peckish, why not have a nibble on meat grown from your own body?

Scientists and designers from the US have created a ‘grow-your-own’ steak kit, which uses human cells and blood to pose a question to the cultured meat industry.

The Ouroboros Steak, named after the ancient Egyptian snake that eats itself, can be grown from cells scraped from the inside of your cheek and fed serum from old donated blood.

While the steak is currently just a prototype, and designed as a thought-provoking piece of art, it is a real piece of meat grown from human cells.

Currently on show at the Beazley Designs of the Year exhibition, the human morsels are supposed to highlight the lab-grown meat industry’s reliance on fetal bovine serum (FBS), a protein-rich growth liquid for cell cultures.

FBS is derived from the blood of calf fetuses, often when their pregnant mothers are killed in the meat and dairy industries.

This serum, which can cost up to £700 per litre, is often criticised on the grounds of supporting environmentally damaging industries.

Lab-grown meat products often tout claims of being more environmentally friendly than factory-farmed animals, but critics point to the use of FBS as a blind spot.

‘Although some lab-grown meat companies are claiming to have solved this problem, to our knowledge no independent, peer-reviewed, scientific studies have validated these claims.

‘As the lab-grown meat industry is developing rapidly, it is important to develop designs that expose some of its underlying constraints in order to see beyond the hype.’

The human-like mouthfuls of the Ouroboros project are created without the use of FBS, as a means to highlight the possibility of lab-grown meats without causing harm to animals.

On display at the Design Museum this year, the mini-steaks were made from human cell cultures purchased from the American Tissue Culture Collection, then fed with human serum made from expired blood donations.

The tiny chops were then arranged on a playful table with silverware as a cheeky nod to typical fast-food joints in the US.

The project eventually wants to have participants use a DIY kit to grow steaks using cells from the inside of their own cheek, and then growing the steaks themselves using mushroom mycelium scaffolds.

After growing in a warm place for three months, the human steaks would be fully grown.

‘Expired human blood is a waste material in the medical system and is cheaper and more sustainable than FBS, but culturally less-accepted. People think that eating oneself is cannibalism, which technically this is not,’ said industrial designer Grace Knight, who helped design the project.

Lab-grown meat is not currently approved for human consumption anywhere currently, but as an industry is already valued at hundreds of millions of dollars.

Companies racing to bring the product to market include Aleph Farms, one of the first to have made a lab-grown steak, and Novameat, which created a 3D-printed steak from vegetable proteins.