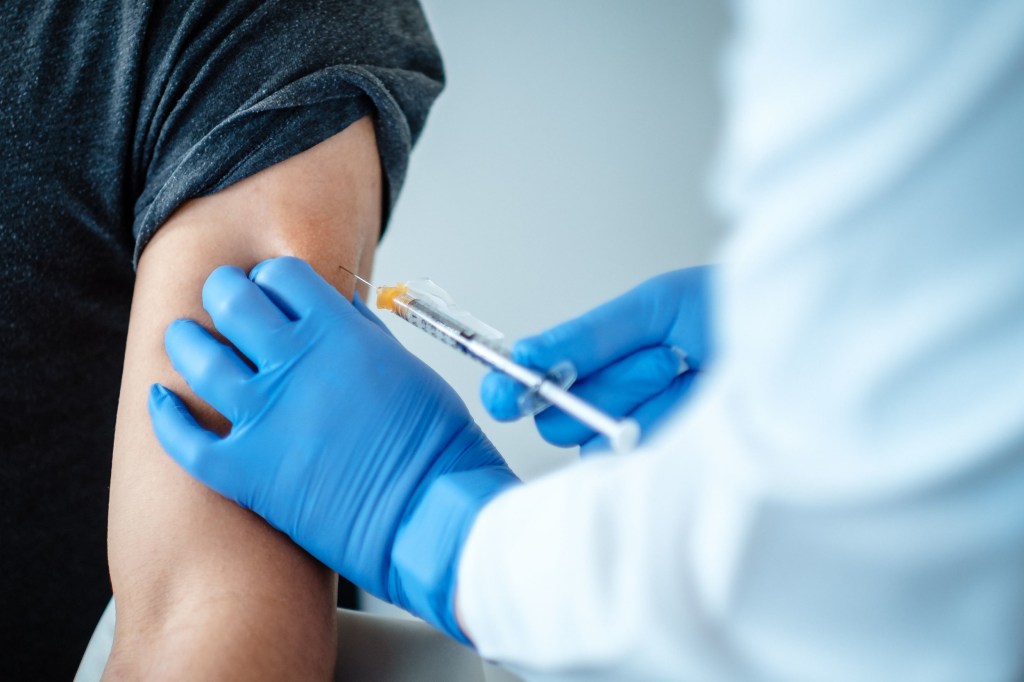 Pfizer’s vaccine breakthrough was greeted with jubilation this week, giving hope to many that we may be nearing the end of the coronavirus pandemic.

But there may be reason to put celebrations on ice for the moment, according to experts.

The vaccine breakthrough, produced by U.S. pharmaceutical conglomerate Pfizer and German biotech firm BioNTech, appears to have 90% effectiveness from a preliminary study.

If this result was borne out over the general population, it would vastly reduce deaths and cases.

However, there are still several hurdles to jump through, such as proving widespread efficacy, logistical problems and ensuring the vaccine is safe.

Dr Charlie Weller, head of the vaccines programme at the Wellcome Trust, has warned that a vaccine will be just one of a suite of tools to tackle coronavirus.

‘We do need to be realistic about what a successful vaccine can offer,’ Weller said.

‘Unfortunately, it doesn’t mean that we’ll wake up tomorrow, we’re all given the vaccine and the pandemic ends.

‘But it does give us that light at the end of the tunnel, that hope and that positivity that there is going to be an end to this pandemic.’

What are the logistical challenges for the vaccine?

Sir John Bell, a member of the Government’s vaccine taskforce and regius professor of medicine at Oxford University, made headlines yesterday when he indicated life might return to normal sooner rather than later.

Asked whether we might be able to return to normal by spring, Sir John told BBC Radio 4’s The World At One: ‘Yes, yes, yes, yes. I am probably the first guy to say that but I will say that with some confidence.’

But he also warned that it would be a challenge to organise distribution of a vaccine in the UK.

While Downing Street has secured at least 10 millions doses to be distributed by the end of the year (rising to 40 million next year), this won’t be enough to eliminate the virus altogether.

Even if those doses were produced and distributed instantly, this would only be enough doses initially for 5 million people, as at least 2 doses are required for coronavirus protection.

This is much less than what would be required for herd immunity, if it’s possible at all.

Dr Weller added: ‘But even when – I’m being very optimistic here – when the full data comes out, and that vaccine can be rolled out, this is like the best case scenario, we still won’t have enough doses for everyone.

‘And this is why we need a range of vaccines, as well as treatments, and continuing those public health measures of social distancing and wearing masks.’

Weller also said that a vaccination program of this scale has never been attempted in the UK, and would present huge challenges.

The Pfizer vaccine needs to be stored at temperatures of -80 degrees centigrade until the day before use, requiring specialist cooling equipment deployed across the country.

But, encouragingly, vaccines requiring such low temperatures have been successfully deployed before, like the Ebola vaccine in 2015.

How sure are we that the vaccine is effective and safe?

The initial study results announced by Pfizer yesterday found that the vaccine was 90% effective at protecting against coronavirus.

There were 43,538 participants on the trial; half of them were given the real vaccine, the other half a placebo (a drug which does nothing). But the participants were unaware which they received.

Of the 94 people that were confirmed to have contracted coronavirus on the trial, only 8 had received the vaccine – which leads to the 90% effectiveness figure.

However, there are are still some things which remain unclear.

While this effectiveness shows the vaccine protects against the coronavirus disease, it doesn’t prove it reduces infectiousness, or show how whether immunity lasts for a long time.

A vaccine that prevents the disease but doesn’t reduce infectiousness appears unlikely.

‘It’s just not possible that someone who is not sick is producing the same amount of virus over a significant period as someone who’s getting sick,’ former virologist Vishal Gulati told UnHerd.

And, while the vaccine appears very safe (there were no adverse effects in the more than 20,000 people who received it), longer trials involving more people are still needed.

Though these results have yet to be peer-reviewed, and the vaccine has not yet received regulatory approval, there are still many reasons to be optimistic.

Assuming the positive results do continue to hold up from further testing, it is likely Pfizer will apply for emergency approval to begin rolling out the vaccine before the end of November.

‘It’s not that silver bullet. It is a really positive next step, but it will be the little small steps rather than the giant leap,” Dr. Charlie Weller said.

How long could vaccination take?

Professor Nilay Shah, head of the department of chemical engineering at Imperial College London, said the results from the Pfizer/BioNTech study are encouraging.

Though the trial is not finished, Shah suggested the results are on the right track.

But he was cautious to put a time limit on how soon we might be rid of the virus, saying vaccinations won’t be complete for ‘some time.’

When this time may be is uncertain, but even the most cautious of experts think that time is sooner rather than later.

‘If the 90% efficiency is borne out over time and we were able to start mass vaccination in the new year, we should be able to vaccinate millions of people in priority groups in the months that followed, and we would be able to ease restrictions over time,’ Prof. Shah said.

The people in ‘priority groups’ – those in the 50+ age group, health and social care workers and those with health conditions – will be vaccinated first.

It is only then, Prof. Shah suggests, that an easing of restrictions might start to begin.

‘We would then need to think about how to work through the next wave,’

‘Ideally we would like to get to a very high level of vaccinations before removing restrictions entirely.’