What’s the meaning of a blue moon and how can you see the next one on Halloween? 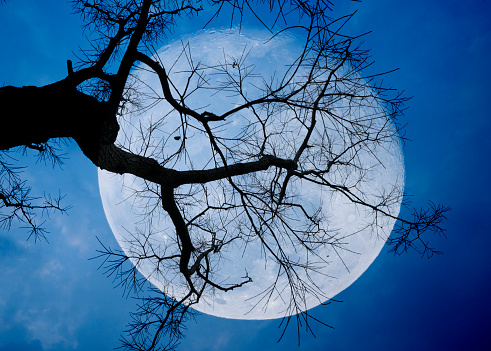 We know, we know – how could 2020 possibly get any spookier?

Well, turns out it can. With Halloween not too far off, spooky season gets a little more chilling this year thanks to a rare lunar event coinciding with the annual holiday of horror.

This year, a full blue moon will fall on All Hallows’ Eve.

What does this mean and where can you see it?

What is a blue moon?

When two full moons appear in a single month (which happens on average roughly every three years), the second full Moon is christened a ‘Blue Moon.’

It’s thought that the blue moon got its name from the Farmer’s Almanac.

In a 1946 issue of Sky and Telescope magazine, an article called ‘Once in a Blue Moon’ by James Hugh Pruett, referred to the 1937 Maine Farmer’s Almanac’s analysis of this rare second full moon.

‘This gives 11 months with one full moon each and one with two. This second in a month, so I interpret it, was called Blue Moon.’

Full moons used to be given names based on the harvests and time of the year, so this ‘extra’ moon might have just been given a name to not disrupt what the farmers had gotten used to.

How to see the Halloween blue moon 2020

If there is good visibility in the sky on Halloween 2020, people in the UK will be able to clearly see the full moon.

What’s rare about this full moon is that it will be visible around the world.

This only happens once every 19 years on Halloween – following a pattern known as the Metonic Cycle.

Loony for lunar activity? Here’s when the rest of the full moons are expected for 2020.

PrevPreviousThe best TV soundbars for your home cinema, from Sonos to Sony
NextHow to install iOS 14 and customise your home screen widgetsNext