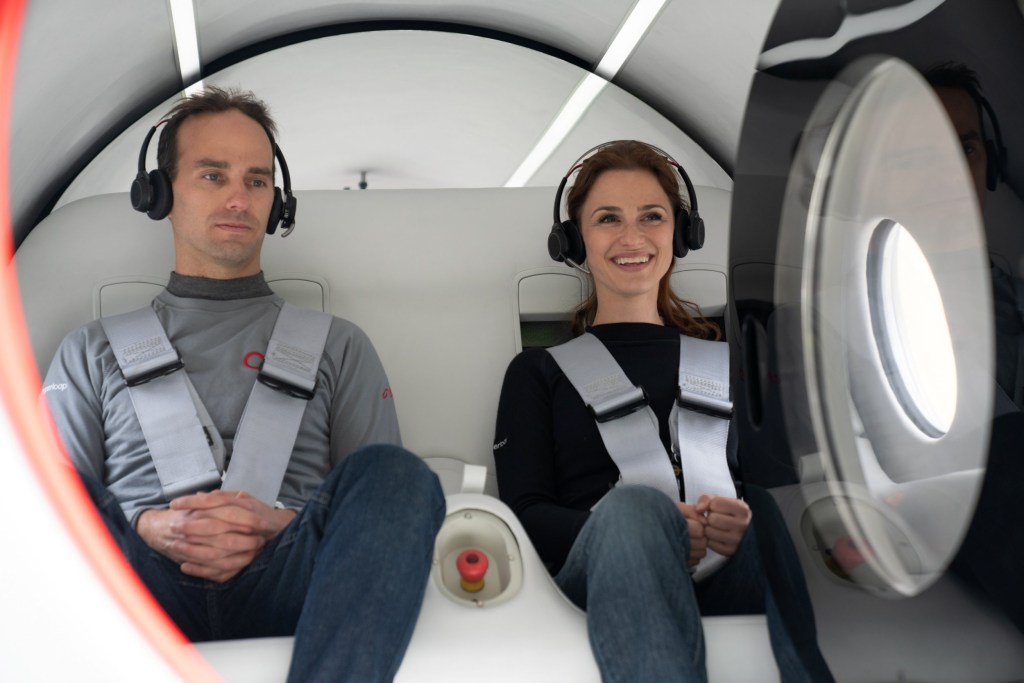 Two people have become the first passengers on a Hyperloop, a technology considered to be the future of high-speed ground transport.

The demonstration and test took place on a 500 metre test track in the Nevada desert near Las Vegas on Sunday.

Footage showed the pod carrying the passengers taking around 15 seconds to complete the test as it accelerated to more than 100 miles per hour.

The system is intended to eventually allow journeys of up to 670mph with the technology using electric propulsion, with passive magnetic levitation creating low pressure within the tube which is in near-vacuum conditions.

It looks like one of those things they used to launch spaceships in sci-fi films – but it’s real, working and on our planet, now.

Jay Walder, CEO of Virgin Hyperloop, said: ‘I can’t tell you how often I get asked ‘Is Hyperloop safe?’

‘With today’s passenger testing, we have successfully answered this question, demonstrating that not only can Virgin Hyperloop safely put a person in a pod in a vacuum environment, but that the company has a thoughtful approach to safety.’

Sir Richard Branson, Founder of the Virgin Group, added: ‘For the past few years, the Virgin Hyperloop team has been working on turning its ground breaking technology into reality.

‘With today’s successful test, we have shown that this spirit of innovation will in fact change the way people everywhere live, work, and travel in the years to come.’

The testing campaign, from the beginning stages all the way through to today’s successful demonstration, was overseen by the industry-recognized Independent Safety Assessor (ISA) Certifer.

Having undergone a rigorous and exhaustive safety process, the newly-unveiled XP-2 vehicle demonstrates many of the safety-critical systems that will be found on a commercial hyperloop system and is equipped with a state-of-the-art control system that can detect off-nominal states and rapidly trigger appropriate emergency responses.

The occupants made their maiden voyage on the newly-unveiled XP-2 vehicle, designed by Bjarke Ingels Group, which was custom-built with occupant safety and comfort in mind.

While the production vehicle will be larger and seat up to 28 passengers, this 2-seater XP-2 vehicle was built to demonstrate that passengers can in fact safely travel in a hyperloop vehicle.

‘Hyperloop is about so much more than the technology. It’s about what it enables – the trips you’d be able to take from Paris to Berlin, Lisbon to Madrid, or Warsaw to Prague,’ said Sara Luchian, Director of Passenger Experience for Virgin Hyperloop.

By combining an ultra-efficient electric motor, magnetic levitation, and a low-drag environment, hyperloop systems can carry more people than a subway, at airline speeds, and with zero direct emissions.

With the goal to be safety certified by 2025 and begin commercial operations by 2030, the 100% electric Virgin Hyperloop system could play a key role in helping achieve the European Green Deal’s climate-neutrality objective.