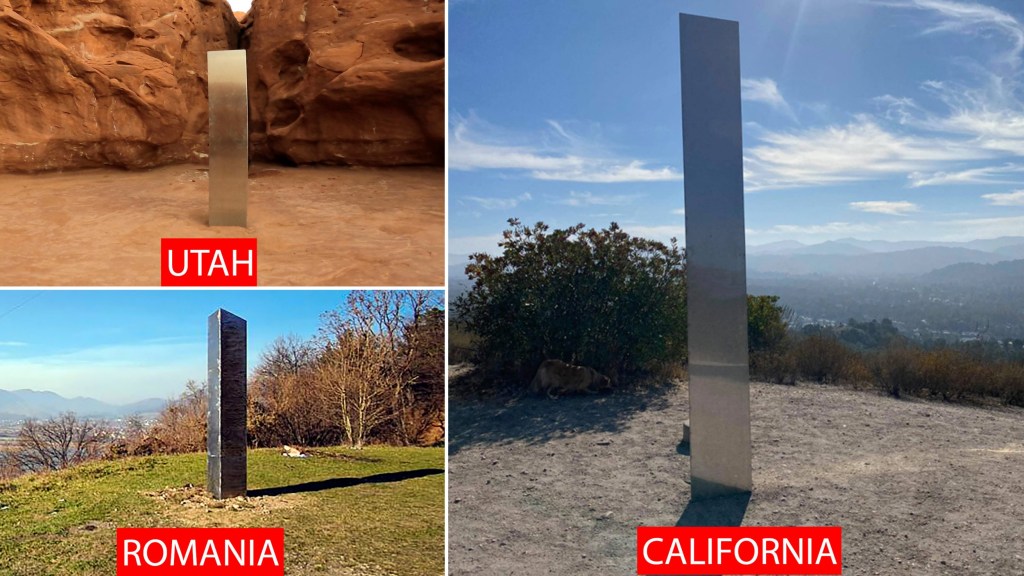 A third metal monolith has been discovered atop a mountain in California.

The structure seems identical to the ones found in the desert in Utah and next to an ancient fortress in Romania.

It deepens the mystery of where these shiny metallic structures have come from and who is putting them there.

The third monolith was reported by the local paper in the small town of Atascadero, California. They reported that hikers had found it on top of Pine Mountain and had posted images of it on social media.

‘The three-sided obelisk appeared to be made of stainless steel, 10-feet tall and 18 inches wide. The object was welded together at each corner, with rivets attaching the side panels to a likely steel frame inside,’ the Atascadero News reported.

Unlike the first monolith found in the Utah desert, this latest one appears slightly more unstable.

While the Utah monolith was firmly buried in the dirt, the local reports suggest the California monolith is merely standing on the ground and could be pushed over.

The original monolith in Utah has been removed after first being spotted on November 18.

It was removed by Utah adventure tour guides who uploaded a video of themselves taking down the monolith under the cover of darkness.

The video was posted to TikTok by Sylvan Christensen and shows him and three others pushing over the metal sculpture and strapping it to a wheelbarrow before taking it away.

The tour guides said they took the obelisk down because they were worried that the sudden interest would ruin the area with people driving, biking and flying to the location.

‘Don’t abandon your personal property on public land if you don’t want it to be taken out,’ he wrote in the caption.

Eyewitness Ross Bernards said he had been taking pictures at the monolith on Friday night when the group of men moved in to destroy it.

Bernards described how the men worked for between 10 to 15 minutes, repeatedly shoving the structure hard until it crashed to the ground.

While carrying out the vigilante demolition job, one of the men reportedly remarked, ‘This is why you don’t leave trash in the desert’.

Images of the group show the men working under the cover of darkness with torches strapped to their foreheads, wearing gloves but not face masks.

A second monolith, bearing a striking resemblance to the Utah pillar, has also appeared across the other side of the world in Romania.

At the time of writing, the second monolith is still standing.

PrevPreviousStop watching in HD to save the planet, scientists warn
NextElon Musk ‘highly confident’ SpaceX can launch manned mission to Mars in 2024Next