The first complete dinosaur brain has been perfectly reconstructed 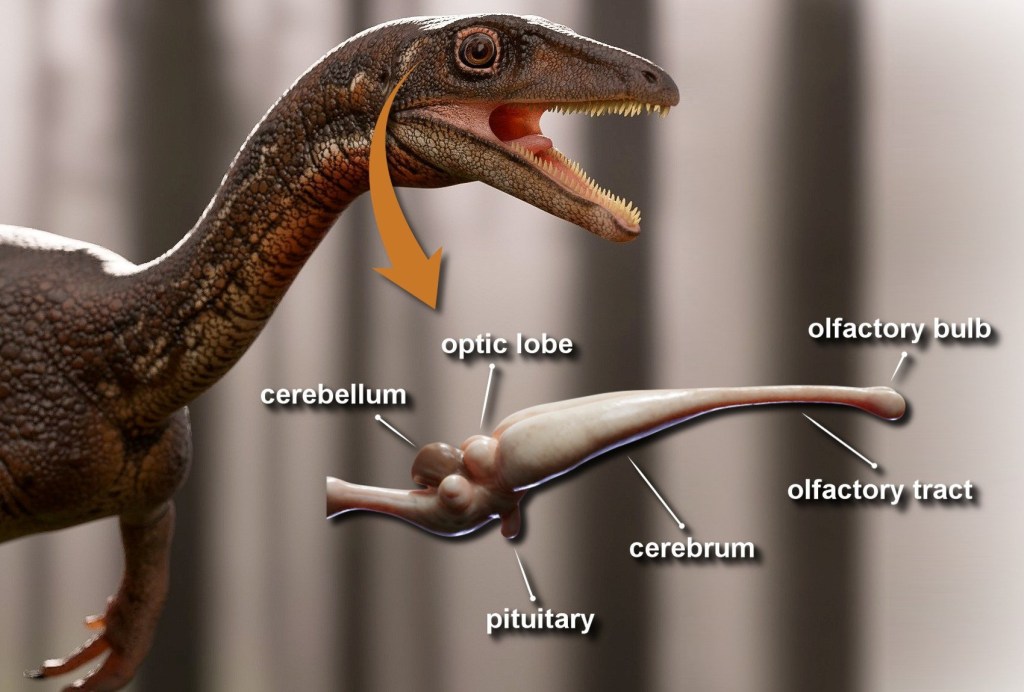 The first complete brain of an dinosaur has been unveiled by scientists.

Weighing less than a pea, it belonged to a meat eater that walked the Earth 233 million years ago.

The remarkable discovery sheds fresh light on the evolution of the biggest land animals that ever lived.

Named Buriolestes schultzi, it is an ancestor of the long necked sauropods – the most colossal of them all.

Palaeontologist Dr Rodrigo Muller, of the Federal University of Santa Maria, Brazil, told South West News Service: ‘The brain is a window into its behaviour – and intelligence.’

The findings show Buriolestes was an athletic and skilful hunter. It had better eyesight than smell. And it was not as smart as T Rex – or today’s birds.

The pet sized creature weighed about a stone. It was small but vicious – similar in stature to a fox.

Its sharp, curved teeth and claws would have ripped lizards and primitive mammals to shreds – as well as the young of other dinosaurs. It also ate insects.

Buriolestes was hunted itself – by ‘killing machine’ Gnathovorax. The ten foot tall dinosaur was the apex predator of the period.

Dr Muller said: ‘The brain of Buriolestes is relatively small, weighing about 1.5 grams (0.05oz) – which is slightly lighter than a pea. The shape is primitive, resembling a crocodile’s.

‘In addition, the presence of well developed structures in the cerebellum indicates the capability to track moving prey.

‘Conversely, the olfactory sense was not good. Buriolestes hunted and tracked prey based on sharp eyesight rather than smell.’

Soft organs, such as the brain, don’t survive fossilisation. So his team used CT (computed tomography) scans to peer into the internal cranial cavities.

He explained: ‘We access isolated sections of the skull, filling the gaps of each. When we put these regions together we get a 3D representation of the space – or endocast.’

The X-rays mapped the cerebellum that controls co-ordination, balance and posture as well as the optical lobe – the visual processing centre.

They also revealed the olfactory bulb and tract responsible for smell and the cerebrum that triggers intelligence and conscious thoughts.

The pituitary gland at the base of the brain was drawn up too. It produces hormones that fuel growth, blood pressure – and reproduction.

‘It is the upper and back part of the skull, which forms a protective case around the brain.’

He added: ‘Buriolestes dates back to the dawn of the dinosaurs. So far, complete braincases from the oldest dinosaurs worldwide were unknown. It has helped unlock the secrets of its way of life.’

The bizarre animal measured about four feet from head to tail. It had a long neck, razor sharp teeth and three long claws on each of its four limbs. It ran on two legs.

Its remains were unearthed in 2015 during an expedition to the rainforest of southern Brazil led by Dr Muller.

He said: ‘It is a well known dinosaur graveyard. The place is a ravine with other fossilised skeletons in a farm.’

Buriolestes lived during the Triassic, when South America was still part of the super-continent called Pangaea.

Despite being a carnivore, it is the earliest member of the plant-eating sauropods – that weighed up to 100 tons and reached 110 feet long.

Dr Muller said: ‘The reconstruction allows us to analyse the brain evolution of the biggest land animals that ever lived.’

One of the most conspicuous trends is the increase of the olfactory bulbs. These were relatively small in Buriolestes – but became very large in sauropods.

Dr Muller explained: ‘The development of a high sense of smell could be related to the acquisition of a more complex social behaviour – seen in several vertebrate groups.

‘Alternatively, it has also been observed high olfactory capabilities played an important role in foraging – helping animals to better discriminate between digestible and indigestible plants.

‘Finally, another putative explanation for the better smell in sauropods relies on the capability to pick up the scent of predators.’

The pituitary gland is also related to size – and is proportionally small in Buriolestes, On the other hand, it is very large in the giant sauropods.

Dr Muller said: ‘Hence, we can associate the development of the gland with the gigantism of sauropods.’

The study published in the Journal of Anatomy also calculated the intelligence of Buriolestes based on brain volume and body weight.

Dr Muller said: ‘The values obtained are higher than that of the giant sauropods – like Diplodocus and Brachiosaurus – suggesting a decrease in brain size compared to body.

‘It changed across the time, not only in general morphology, but also in the neurological functions. The brain anatomy changes together with the body plan of these animals.

‘It is interesting because several other lineages present an increase in this phenomenon – known as encephalization – through time.

‘Nevertheless, the ‘cognitive capability’ of Buriolestes is lower than that of theropod dinosaurs, the lineage that includes T Rex and Velociraptor of Jurassic Park fame – and birds.’

In the view of most experts, birds are ‘living dinosaurs’. Their key skeletal features – as well as nesting and brooding behaviours – actually arose first in some dinosaurs.

PrevPreviousWater on Mars thought to have formed 4.4 billion years ago
NextScientists discover why you get chills when you hear your favourite musicNext