Spinosaurus was the most terrifying dinosaur you’ve never heard of 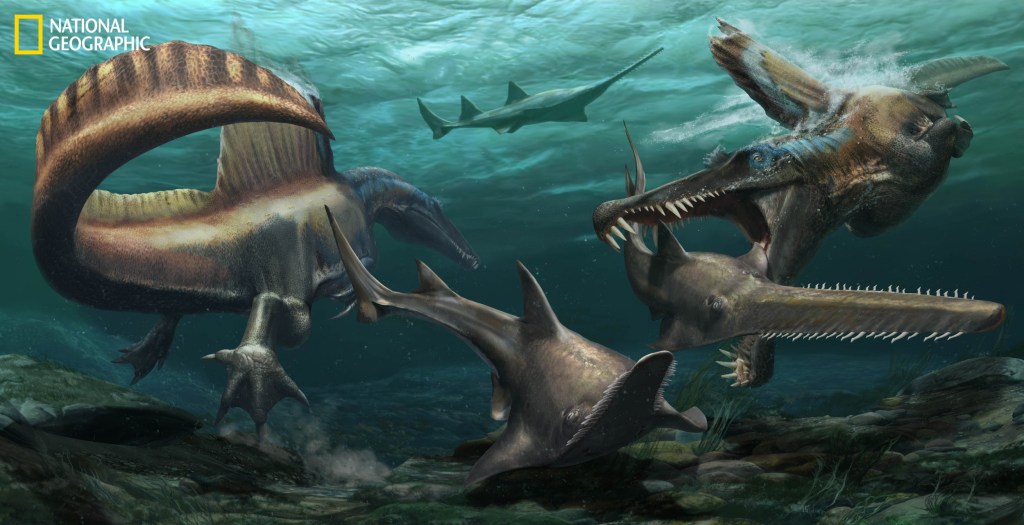 Tyrannosaurus Rex, velociraptor and triceratops are probably some of the first dinosaurs that come to mind when you conjure up images of the ancient reptiles.

But there’s another type of dinosaur that didn’t make it into Jurassic Park that would be borderline terrifying if you encountered it today.

It’s called the Spinosaurus and it was an aquatic predator that stretched to fifty feet in length and weighed over seven tonnes. It was larger than a T-rex and had a long elongated snout like a crocodile filled with razor-sharp teeth.

More information on the Spinosaurus was uncovered earlier this year with help from National Geographic magazine. The publication is celebrating dinosaurs with a huge cover feature on its upcoming October 2020 issue.

The cover story, ‘Reimagining dinosaurs’ details the fact we have learned more about the ancient animals in the last 25 years than in the last 250.

More than anything else, scientific advances show us that dinosaurs weren’t the one-note menaces we sometimes see in popular culture,’ said Michael Greshko, a National Geographic Contributor.

‘They courted each other with elaborate displays and squabbled for social status. They suffered broken bones and infections. They snapped after bugs and nibbled on ferns.

‘Their days were as rich and varied, frenzied and humdrum, as those of the birds outside our windows. Even the biggest, baddest T. rex sometimes took a nap.’

The issue reveals the technologies being used to understand dinosaurs in greater detail and also focuses on what we know about Spinosaurus.

The amphibious reptile is the only dinosaur that is known to have swum. It had huge jaws packed with six inch long razor sharp teeth.

It was able to walk on soft mud thanks to its large – probably webbed – flat feet.

Dr Simone Maganuco, of the Natural History Museum in Milan, Italy, said: Its well-spaced teeth – which are conical rather than blade-like – are better adapted for holding on to slippery prey than for slicing off chunks of meat.

‘Its snout is more similar to that of crocodiles than to other predatory dinosaurs. This housed sensory structures able to capture the waves produced by swimming prey.’

Spinosaurus swam through the river systems of Africa 95 million years ago, and we are only really starting to find out about it now.

The October issue of National Geographic will be on shelves on October 7.