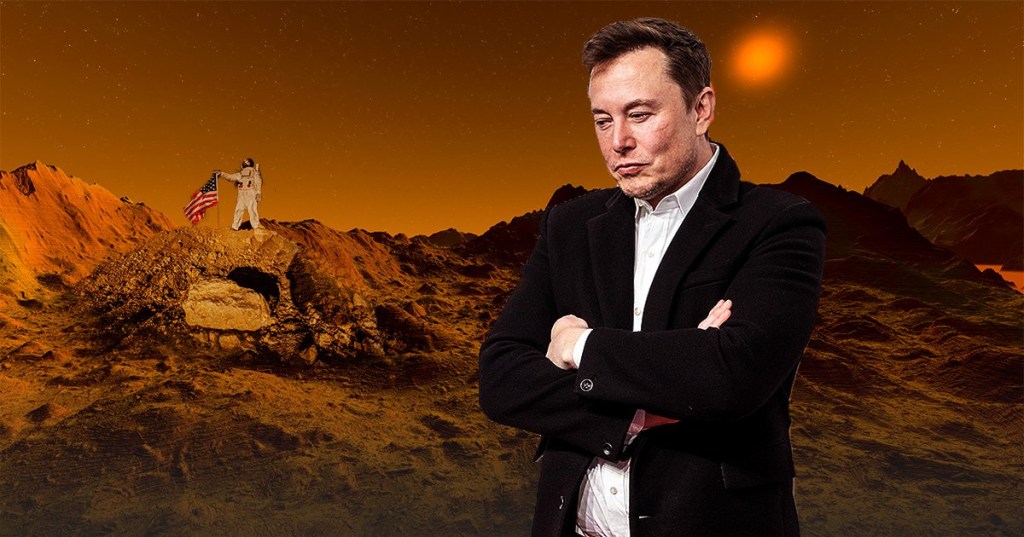 But the aim of the private space company has always been to land humans on Mars.

And when it gets there, the company apparently plans to impose its ‘own legal regime’ on the Red Planet with a ‘self-governing’ self-sustaining settlement.

The first clue to this aim came from David Anderman, SpaceX’s general counsel. He recently gave an interview to Law360 and indicated he’s already drafting a constitution for Mars to stand apart from Earth.

But the second, and altogether more befuddling indication, is found in the terms and conditions for customers signing up to the Starlink beta service.

The details were posted to Reddit and makes plain that Mars should be regarded as a ‘free planet’.

‘For Services provided on Mars, or in transit to Mars via Starship or other colonization spacecraft, the parties recognize Mars as a free planet and that no Earth-based government has authority or sovereignty over Martian activities. Accordingly, Disputes will be settled through self-governing principles, established in good faith, at the time of Martian settlement.’

For SpaceX and its founder Elon Musk to pull off the trick of getting Mars recognised as its own sovereign planet will take some pretty spectacular diplomacy.

Of course, the whole thing could be just an elaborate joke. SpaceX and Elon Musk in particular are well-known for being fond of in-jokes related to space travel and sci-fi tropes.

However, the commitment to getting to Mars in the first place remains unshakable.

Back in June, following the successful launch of the Crew Dragon capsule to the ISS, Musk laid out the company’s strategy.

The billionaire has said that Starship is now SpaceX’s ‘top priority’ and reinforced his ultimate aim to see humans settle on Mars.

Musk confirmed on Twitter that he plans to stick to his ambitious launch schedule of firing the first ships towards Mars by 2022. These missions will haul cargo designed to support future manned missions to the Red Planet.

Starship is central to this overarching goal. The gigantic spacecraft is currently under construction at SpaceX’s facility in Texas and can transport 150 tonnes or 100 people into space on each trip.

According to Musk, time is against them. He responded to a tweet suggesting that in a few billion years the sun will explode and Earth will be decimated. Of course, so will Mars, but that’s beside the point.

Musk estimates it will take about a dozen Starship missions to Mars to deliver enough material to build a self-sustaining colony there.

Earth and Mars align favourably about every 26 months so depending on how many Starships the company can build and launch, we could conceivably have enough gear on Mars for a human settlement by 2050.

According to CNBC, Musk sent an email to SpaceX staff saying Starship was now the ‘top SpaceX priority’ and urging them to ‘dramatically and immediately’ speed up the progress on it.

The only other priority is to ‘reduce Dragon return risk’ according to the email.

Starship will eventually become SpaceX’s standard rocket. And now that the company can bank on repeated checks from the US government to ferry astronauts back and forth to the ISS, completing it could be much more achievable.

In 2018, Musk insisted the Mars colony won’t just be an ‘escape hatch for rich people’.

Speaking at SXSW, the billionaire hinted that people whose bank balance is in the red will also be allowed to live on the Red Planet. It’s unclear whether they would actually want to do this because life on Mars is likely to be pretty rubbish at first.

Musk said it would only house ‘the most elementary infrastructure’ with ‘just a base to create propellant, a power station, blast domes in which to grow crops, all the sort of fundamentals without which you could not survive,’ he said.

So that means no nice old pubs, Greggs bakeries or any of the other nice things at first.

‘There will be an explosion of entrepreneurial opportunity because Mars will need everything from iron foundries to pizza joints to nightclubs,’ he added.

Residents could expect a fairer form of government called direct democracy in which ‘everyone votes on every issue’, Musk said.