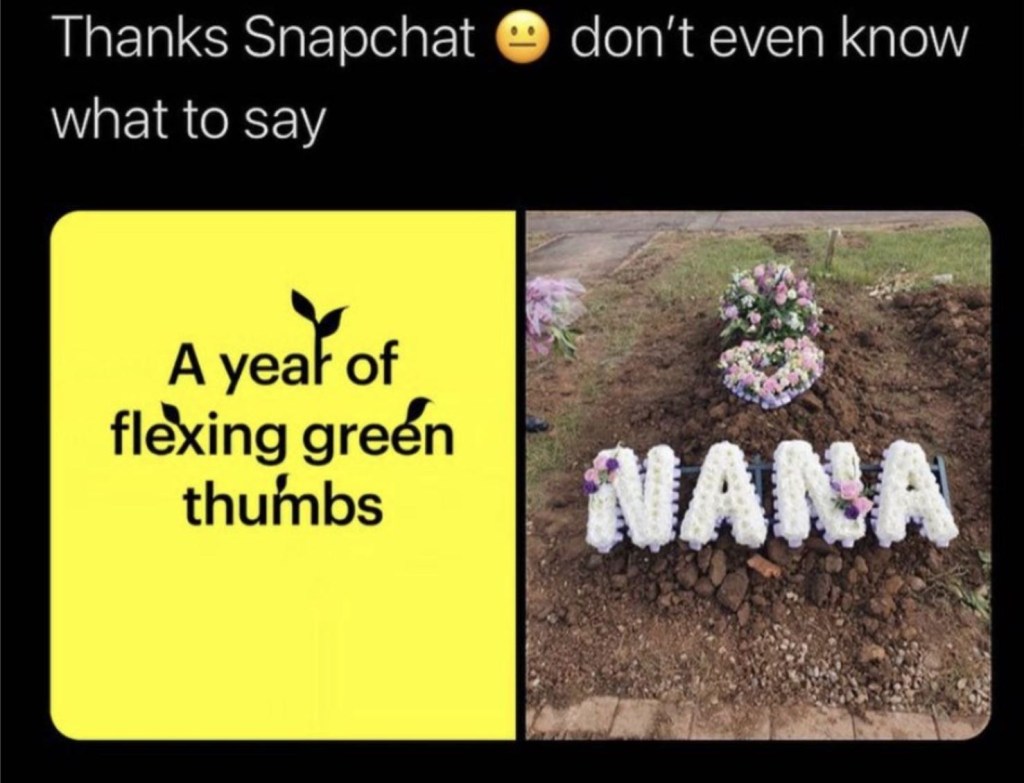 Snapchat has come under fire after its end-of-year review congratulated users on their gardening skills after picking up on photos of flowers at family funerals.

Like all social media companies, Snapchat uses algorithms to analyse and categorize pictures.

Unfortunately for the people affected, it couldn’t differentiate between flowers placed by a grave and those planted in a garden.

The error was highlighted in Twitter user @leahclarkxx’s post where the photo Snapchat used for ‘a year of flexing green thumbs’ was of her Nana’s burial.

Responses to the tweet and others posted separately revealed this wasn’t an isolated incident, either.

This isn’t the first time that automated software has made a gross miscalculation when it comes to revisiting photos posted on social media.

As Anoushka Sarup pointed out on Medium, in 2014 Facebook highlighted a picture of a grieving father with his beloved daughter as his ‘top post’ in an end-of-year review. The photo was dredged up and presented with clip-art partygoers and celebrations in a way that would never have been done if it was a human being controlling the feature.

‘If you scroll through the comments under Leah’s Twitter post, it’s clear that nothing has changed: social media is still as harsh as ever,’ Sarup wrote.

‘Sure, these features might work great for the vast majority of people, but it refuses to take into account those who’ve experienced losses or hardships. And in a year like 2020, the least one would’ve expected is that these companies would show a little sensitivity.’

Metro.co.uk contacted Snapchat regarding the issue and the company said: ‘We’re deeply saddened that some Snapchatters found an element of their 2020 story upsetting.

‘We’ve released year end stories for the past few years to bring joy to our community, but can always continue to improve and will do so with this feedback in mind.’