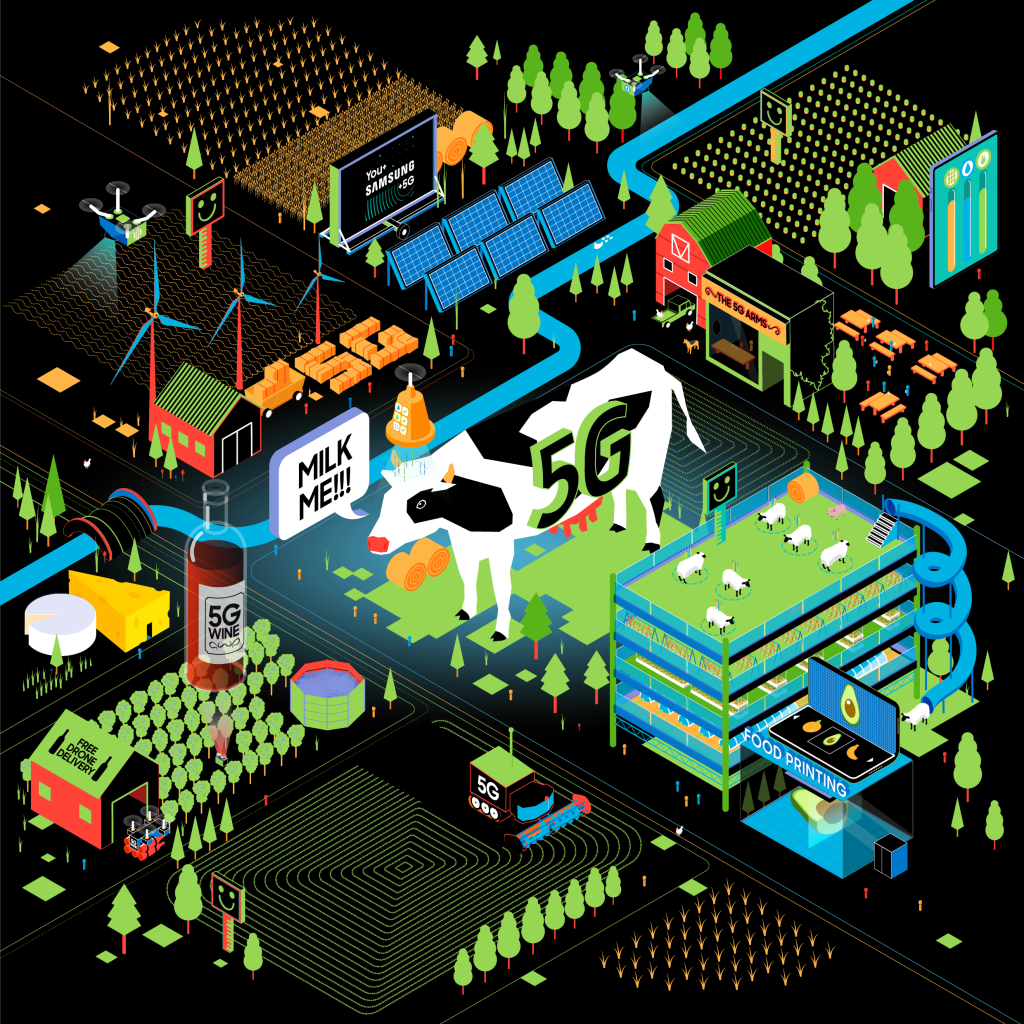 Technology is adding a sprinkle of 5G magic to the way we produce food, powering weird and wonderful innovations such as printers which print out vegan steaks.

A new podcast, ‘Whatever Next?’ starring mathematician Dr Hannah Fry and comedian Suzi Ruffell, explores some of the tastiest innovations coming from the frontiers of food technology.

Hannah and Suzi explore technologies including 5G cows with ‘connected collars’ and meet the innovators behind ideas such as layered ‘vertical farms’ which might save the planet.

Along the way, they even find time for a delicious glass of 5G wine, from a ‘connected vineyard’ where drones hover over the vines.

Suzi says, ‘It’s not just the farming of food that’s going through big changes – it’s the preparation of it too.’

‘I’ve been blown away by what I have seen while recording this podcast.

‘It’s very important for them to get their steps in,’ Suzi laughs.

At the Agri-EPICentre in Shepton Mallet, the cows wear 5G smart collars, and high-tech ear tags which help farmers keep track of their movements, and their health.

The sensors attached to the animals mean they can decide to be milked when they are ready, the presenters learn.

Hannah says, ‘Having all these sensors means you can do really clever things, like check on the temperature of the milk – or the electrical conductivity of the milk (which means you can tell if a cow has mastitis).

‘And they’ve got tags on their ears measuring how often they’re chewing their cud, that can pick up on if they have tummy aches. And they have cameras that 3D scan them and make sure if they’re putting on weight correctly.’

Print your own dinner

Machines that ‘print out’ dinner are a staple of science fiction TV shows such as Star Trek – but the technology is now becoming reality.

‘Printed food’ could lead to ultra-convincing meat substitutes which will help people cut down on meat (and help to save the planet).

The company is making plant-based alternatives to steak and pork (and is currently working on Suzi’s favourite, tuna steak).

Suzi says, ‘Their main aim for all of this is to reduce the impact of the meat industry on the environment by providing a real alternative to meat eaters.’

‘They basically fill the printer cartridges with protein mush, upload their design for the piece of meat and then the printer puts down layers and layers of really thin fibres which create a sort of chewy mesh, or as I like to call it, meat.’

The farms of the future won’t be grids of grassy fields divided by hedges – instead they’ll be layers of plants stacked on top of one another.

Vertical farms use technologies such as hydroponics and aeroponics, where plants are nourished with liquids sprayed on their dangling roots, to grow food more sustainably.

By the year 2050, the world will need around 70% more food, produced from 25% less land, according to vertical farmers LetUsGrow.

Hannah says, ‘There seems to be a trend here, that the image we have of ancient farming practices is being thrown out the window.’

What better way to unwind after all that, than with a glass of 5G wine?

Hannah and Suzi explore the world of ‘connected vineyards’ which use technologies such as climatic sensor stations and drones to get the most out of grapes. They speak to wine technology expert Jonathan Rodwell about how 5G is helping wine-making pioneers to explore new boundaries (over a glass of 5G plonk, of course).

Listen to ‘Whatever Next?’ on your smart speaker or smartphone via Google, Spotify and Apple Podcasts.