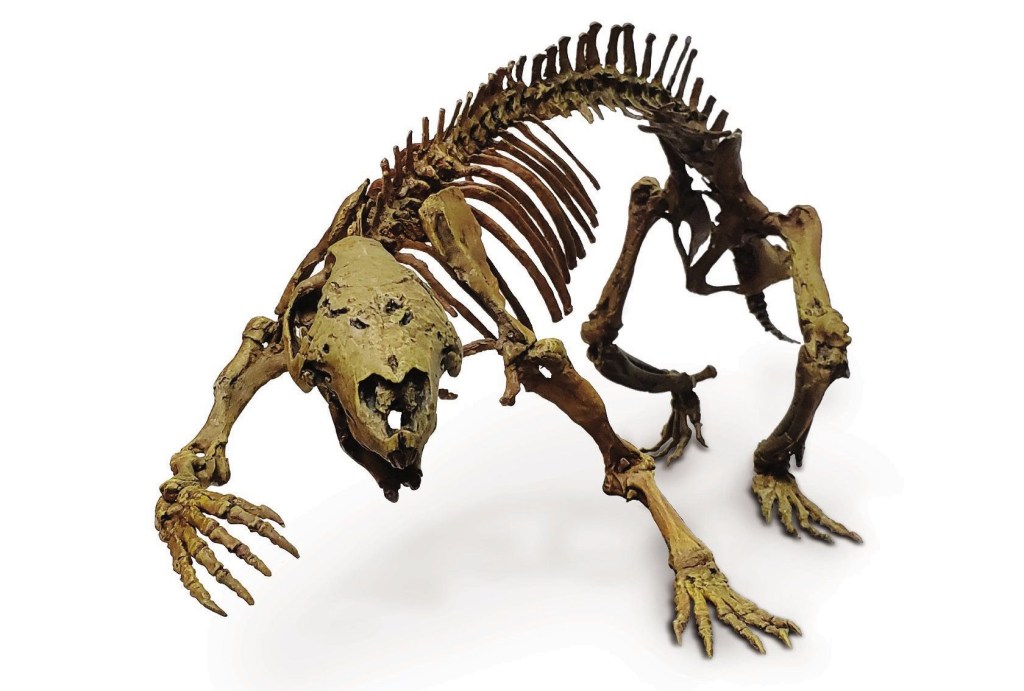 A missing link in the mammal family tree called ‘crazy beast’ who lived alongside dinosaurs 66 million years ago has been unearthed.

The oddball animal related to rats but looked a bit like a badger had an extraordinary body unlike any known mammal.

The bizarre buck-toothed creature as big as a large dog and with three huge front fangs and razor sharp claws as found in Madagascar.

It has been named Adalatherium – which translates as ‘crazy beast’ from the Malagasy and Greek languages.

Co-lead author Dr David Krause, of the Denver Museum of Nature & Science, said: ‘Knowing what we know about the skeletal anatomy of all living and extinct mammals, it is difficult to imagine how it could have evolved. It bends and even breaks a lot of rules.’

Adalatherium’s exquisitely preserved fossil is the most complete for any mammal yet discovered in the southern hemisphere prior to the extinction of the dinosaurs.

A remarkably detailed reconstruction shows it was three foot long, weighed 7lbs and had a short stubby tail.

Its superficial resemblance to a modern badger runs only skin deep. Below the surface, its skeleton is nothing short of outlandish.

Adalatherium had extra-strong hind limbs placed in a sprawling position – similar to today’s crocodiles. Powerful front legs built for sprinting were tucked under the body.

The front teeth were like a rabbit’s – and the back ones completely unique. It had more bones in its spinal column than other animals – and a strange gap in the snout.

There were big claws on the muscular back legs and feet – indicating Adalatherium was a good digger.

But its front legs were less brawny – and more like those of living mammals that can run fast.

The limbs also indicate its posture was a hybrid between those of living mammals and more ancient relatives.

‘Trying to figure out how it moved, for instance, was challenging because its front end is telling us a completely different story than its back end.’

Scans of its ever-growing front teeth teeth suggest it was a plant-eater. The hole in the top of its snout are beyond parallel.

The study published in the Journal of Vertebrate Paleontology shows it was a ‘giant’ relative of mouse-sized mammals that lived during the Cretaceous.

Adalatherium was wiped out in the asteroid strike that killed off the dinosaurs. It was a member of an extinct group called known as gondwanatherians.

They emerged on the southern supercontinent Gondwana – now recognised as Africa, South America, Australia, Antarctica, the Indian subcontinent and the Arabian Peninsula.

Previously, they were represented in the fossil record by only a few teeth and jaw fragments.

At the time of Adalatherium’s existence, Madagascar had been an island separated from Africa and India for over 150 million and over 20 million years, respectively.

Dr Krause said: ‘Islands are the stuff of weirdness. There was therefore ample time for Adalatherium to develop its many extraordinarily peculiar features in isolation.’

Its Late Cretaceous environment was semi-arid and highly seasonal where other truly weird and wonderful animals thrived – such as the pug-nosed croc Simosuchus.

Added Dr Hoffman: ‘Adalatherium is an important piece in a very large puzzle on early mammalian evolution in the southern hemisphere, one in which most of the other pieces are still missing.’

More than anything, the discovery underscores how much more remains to be learned from new finds of early mammals in Madagascar and other parts of the southern hemisphere.