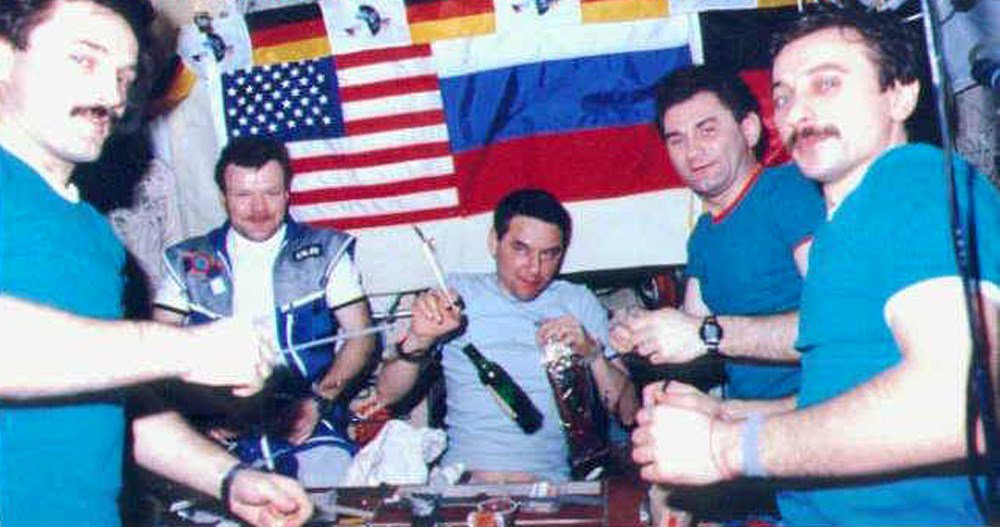 For obvious reasons, drinking alcohol while aboard a space station orbiting hundreds of miles above the Earth is strictly prohibited.

However, that didn’t stop Russian cosmonauts smuggling contraband aboard the Mir space station – the precursor to the ISS – back in the 1990s.

According to the former astronauts, they used hollowed-out books or bottles hidden inside their space suits to get the hooch into orbit.

In some cases, the Russians would go on crash diets so they could hide bottles labelled ‘juice’ inside their space suits without exceeding the weight requirements.

Back in the 90s, a photo was taken of the Russian crewmembers enjoying a ‘cognac party’ aboard the space station. This was, to put it mildly, quite dangerous. The main ingredient, ethanol, is extremely volatile and would seriously damage the station’s equipment. It was a simpler time.

Cosmonaut Igor Volk said he and other crew members lost weight right before boarding the Salyut 7, a precursor to Mir, so they could hide alcohol in secret pouches in their spacesuits without being detected

Doctors had actually recommended the cognac, Lazutkin claimed, ‘to stimulate our immune system and on the whole to keep our organisms in tone.’

But eventually Roscosmos, the Russian space agency, prohibited alcohol and the crews had to get creative.

‘A week before the launch we didn’t eat anything except bread and tea, and we lost almost [4.4 pounds],’ Volk told Beyond Russia.

‘We packed everything in little cellophane bags and when we were being dressed, we placed the bags in the spacesuits.’

We wonder if today’s astronauts would ever think of doing something like that.