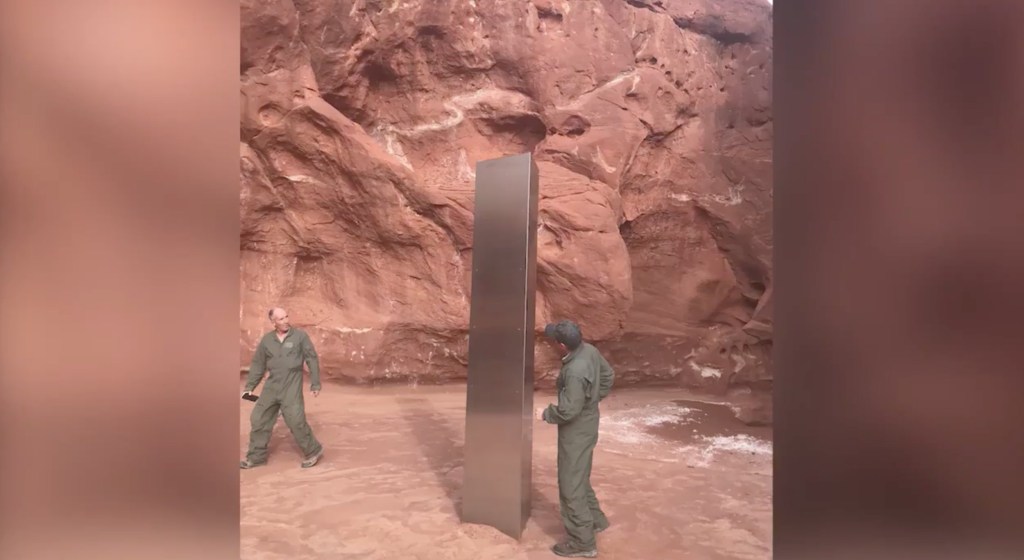 A mysterious discovery has been made in the Utah desert over in the United States.

A gleaming twelve-foot tall metal monolith with no clear markings was spotted by a wildlife resources workers from a circling helicopter.

The crew went in for a closer look and found the metal object had been firmly planted in the dirt.

There were no labels on it, or any other information to suggest where it may have come from.

Could it finally be proof of alien visitors? Or an artistic endevour from someone who’s a fan of science fiction? Specifically, Arthur C. Clarke’s 2001: A Space Odyssey which features an unmarked metal monolith from an alien race.

The object is located inside a red rock cove but crew from the Utah Department of Public Safety haven’t revealed its exact location. Officials are worried that people may endanger themselves trying to get a closer look.

‘One of the biologists is the one who spotted it and we just happened to fly directly over the top of it,’ pilot Bret Hutchings told KSL-TV.

After the helicopter circled back and landed, the crew went into the cove to investigate.

‘We were thinking, Is this something Nasa stuck up there or something? Are they bouncing satellites off it?’ Hutchings said.

‘We were kind of joking around that if one of us suddenly disappears, then the rest of us make a run for it.’

All jokes aside, Hutchings believes the structure is probably some kind of artwork.

‘I’m assuming it’s some new wave artist or something or, you know, somebody that was a big [2001: A Space Odyssey] fan,’ he said.