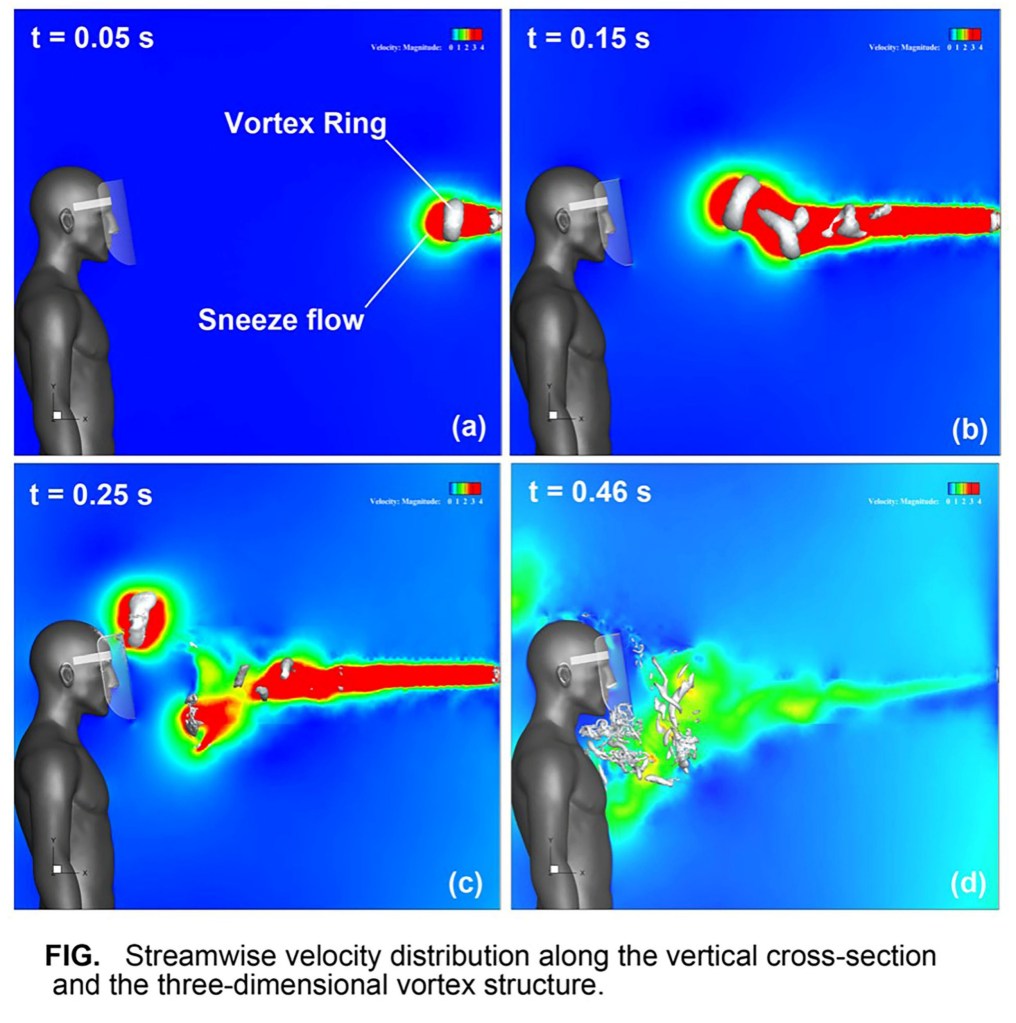 The shields – worn by many hairdressers and some key workers – were touted by industry experts as adequate alternatives to face masks.

The Duchess of Cornwall donned just a face shield when she visited a charity training centre in Milton Keynes in September.

But the study shows that visors are no match for a sneeze from more than three feet away – in line with social distancing rules.

A wearer can be inhaling them in half a second – if they breathe in at the wrong moment, say scientists.

Sneezes produce ‘vortex rings’ invisible to the human eye. The fluid phenomenon has been likened to bubbles generated by marine creatures like whales and dolphins.

Study lead author Dr Fujio Agaki, of Fukuoka University in Japan, explained: ‘The vortex rings generated by the sneeze capture the microscopic droplets within the sneeze and transport them to the top and bottom edges of the face shield.’

They travel to the wearer quickly – within 0.5 to one second after the start of a sneeze from an infected individual one metre (39.3 inches) in front of them.

Dr Agaki said: ‘If this arrival time is synchronised with inhalation, the shield wearer will inhale the droplets.’

The shields do not completely cover the entirety of the face – leaving room for droplets expelled by the mouth and nose to escape.

But the government has recommended them for hairdressers, barbers, nail technicians and tattooists as a barrier between them and the customer.

It advises people to stay at least one metre apart with a face covering or other precautions – or two metres without any.

Face visors are also worn by doctors, nurses and other hospital workers on the Covid-19 frontline, but with the addition of a fitted surgical face mask.

Dr Agaki said: ‘A vortex ring is a doughnut-shaped vortex generated by an instantaneous ejection of fluid from a circular orifice. This resembles bubble rings made by dolphins.’

The rings can capture tens of thousands of microscopic particles – which sneezing generates. The study made three important findings.

The tiny droplets are carried by the vortexes as well as the high velocity airflow caused by sneezing.

What is more, they can get inside the visors through the top and bottom edges. It means they are not effective against infection.

Dr Agaki and colleagues are working to create face shields safe enough to be worn alone.

By gaining a better understanding of their weaknesses, they believe protection can be boosted by reducing the flow getting inside.

‘We want to contribute to keeping people safe from infection, and believe one day in the near future, medical workers will be able to prevent infection using only a face shield and a regular mask or, ideally, with only a face shield.’

The research, published in the journal Physics in Fluids, backs a study by another Japanese team that found the face shields are next to useless.

Computer simulations found they allow half airborne droplets released by coronavirus-infected patients during coughs and sneezes to escape.

The World Health Organisation says face shields only work in combination with other safety measures such as wearing a mask, social distancing and frequent hand-washing.

Another study by US scientists, also published in Physics of Fluids, found the shields don’t work after fluorescent substances were placed in droplets to monitor spread.