Nasa will attempt to grab a chunk of asteroid Bennu today 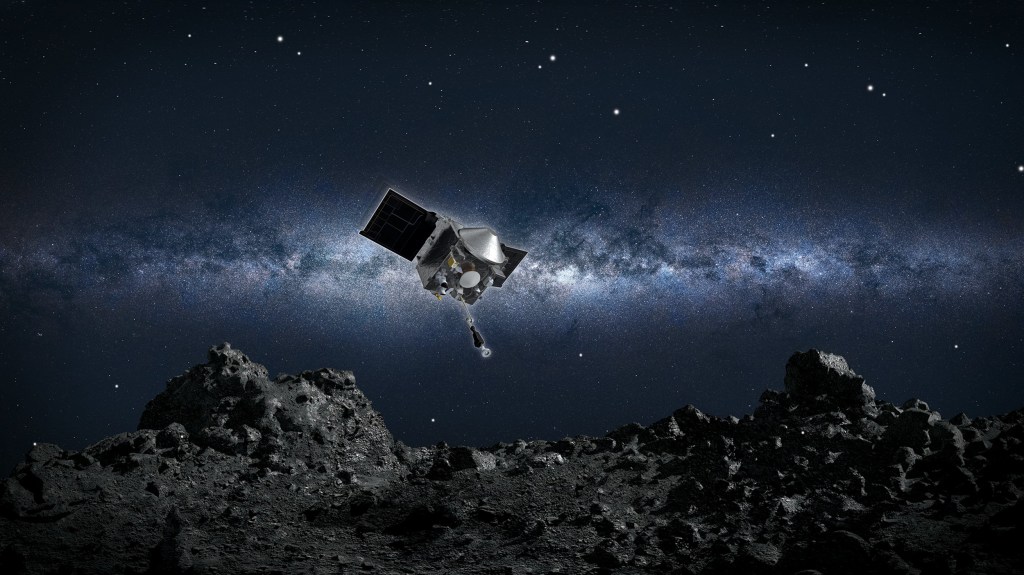 Nasa is planning to land a spacecraft on a speeding asteroid later today in order to collect rare samples of the space rock.

The craft, known as OSIRIS-REx, will touch down for just a few seconds on the asteroid Bennu, following a 4.5-hour carefully-controlled descent.

The far-flung space probe has travelled almost two billion kilometres during a two-year journey from Earth. It then spent a further 2.5 years analysing the asteroid and mapping its surface.

So, as you can imagine, there’s a lot riding on this maneuver.

‘Next time you park in front of your house or in front of a coffee shop and walk inside, think about the challenge of navigating OSIRIS-REx into one of these spots from 200 million miles away,’ said NASA´s deputy project manager Mike Moreau.

It’s believed Bennu may contain the building blocks of life, so recovering a sample will allow scientists to test a theory that asteroids carried vital chemical to earth which sparked the genesis of living organisms.

The van-sized OSIRIS-REx is scheduled to touch down at 22.00BST on October 20 in an area of the asteroid called Nightingale. It’s a rocky area in the asteroid’s northern hemisphere.

Once landed, a robotic arm will attempt to collect samples of the surface that it will store and return to Earth – a journey expected to take up to three years.

As well as important geological samples, Bennu may also be rich in platinum and gold deposits.

Part of the reason the Nightingale region has been chosen as the landing spot is because it’s one of the clearest areas on the asteroid’s surface. It also provides access to finely-grained material.

Bennu sits between Earth and Mars at a distance approximately 207 million miles (334 million kilometers) from our planet.

Because of this, it will take about 18.5 minutes for signals to travel between OSIRIS-REx and NASA headquarters.

Once it drops out of its half-mile-high (0.75 km-high) orbit around Bennu, the spacecraft will take a deliberate four hours to make it all the way down, to just above the surface.

Then the action cranks up when Osiris-Rex’s 11-foot (3.4-metre) arm reaches out and touches Bennu.

Contact should last five to 10 seconds, just long enough to shoot out pressurised nitrogen gas and suck up the churned dirt and gravel.

Programmed in advance, the spacecraft will operate autonomously during the unprecedented touch-and-go manoeuvre.

If the first attempt does not work, Osiris-Rex can try again. Any collected samples will not reach Earth until 2023.

While Nasa has brought back comet dust and solar wind particles, it has never attempted to sample one of the nearly one million known asteroids lurking in our solar system until now.

Japan, meanwhile, expects to get samples from asteroid Ryugu in December – in the milligrams at most – 10 years after bringing back specks from asteroid Itokawa.

Bennu is an asteroid picker’s paradise. The big, black, roundish, carbon-rich space rock – taller than New York’s Empire State Building – was around when our solar system was forming 4.5 billion years ago.

Scientists consider it a time capsule full of pristine building blocks that could help explain how life formed on Earth and possibly elsewhere.

The mission’s principal scientist, Dante Lauretta of the University of Arizona, said: ‘This is all about understanding our origins.’