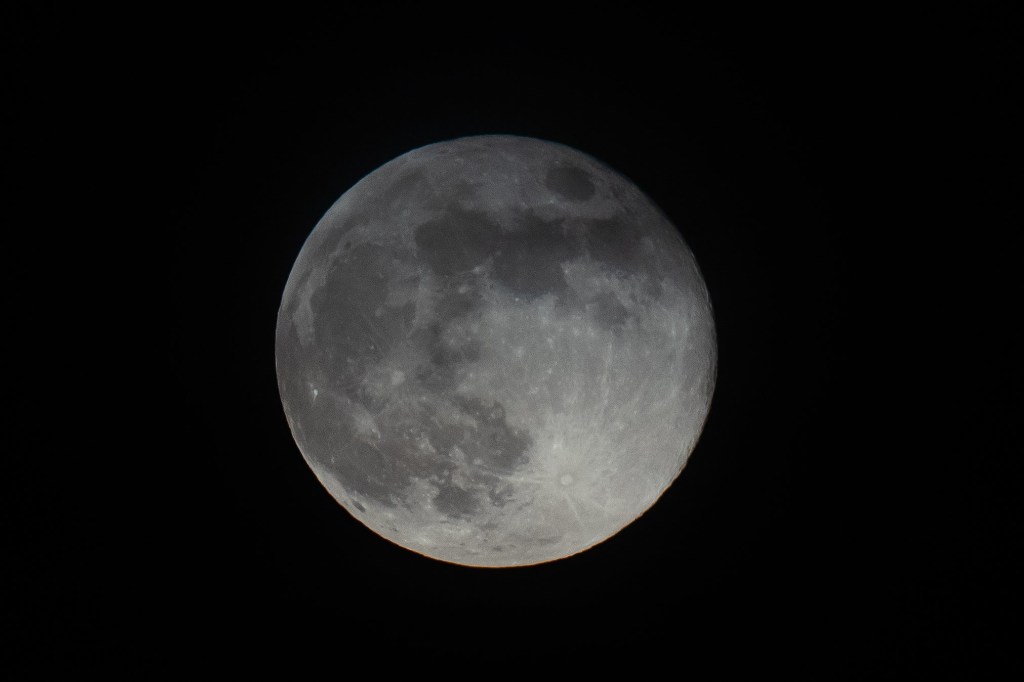 Hidden pockets of water on the moon could be much more common than scientists previously thought, and the discovery could have potential implications for future lunar missions.

Researchers suggest that in some cases tiny patches of ice might exist in permanent shadows no bigger than a penny.

They explored phenomena on the moon called ‘cold traps’, which are shadowy regions of the surface that exist in a state of eternal darkness.

It is thought that many have gone without a single ray of sunlight for potentially billions of years.

Now scientists say there may be a lot more of these nooks and crannies than previous data suggests.

Paul Hayne, assistant professor in the laboratory of atmospheric and space physics at University of Colorado Boulder, said: ‘If you can imagine standing on the surface of the moon near one of its poles, you would see shadows all over the place.

‘Many of those tiny shadows could be full of ice.’

According to scientists, these might be reservoirs capable of preserving water via ice.

Prof Hayne added: ‘If we’re right, water is going to be more accessible for drinking water, for rocket fuel, everything that Nasa needs water for.’

Previous research has reported signs of hydration on the lunar surface, particularly around the south pole.

However, these detections are based on a spectral signature, at three micrometres, that cannot discriminate between water and hydroxyl (oxygen bonded to hydrogen) bound in minerals.

In one of two papers published in Nature Astronomy, Casey Honniball, from the University of Hawaii, and colleagues analysed data from the Stratospheric Observatory for Infrared Astronomy (SOFIA) airborne telescope that observed the moon at six micrometres.

At this wavelength, they were able to detect a spectral signature of water that is not shared with other hydroxyl compounds.

They found water is present at high southern latitudes.

The authors suggest the detected water is probably stored in glass or between grains on the lunar surface that protect it from the harsh environment.

Temperatures in these places can get as low as -157 degrees Celsius.

In the other study, Prof Hayne assessed a whole range of possible sizes for cold traps, down to one centimetre in diameter.

The team found that small-scale micro cold traps – some just 1cm wide – are hundreds to thousands of times more numerous than larger cold traps, and they can be found at both poles.

The authors suggest that approximately 15,000 square miles of the lunar surface has the capacity to trap water.

Researchers say the findings indicate water is efficiently produced or delivered on the moon by various processes, and is likely to be stored in the moon’s cold traps at both polar region.

The team pulled data from real-life observations of the moon, then used mathematical tools to recreate what its surface might look like at a very small scale.

They say it is a bit like a golf ball.

However the researchers caution that they cannot prove these shadows actually hold pockets of ice, and the only way to do that would be to go there in person or with rovers and dig.

But they say the results are promising, and future missions could shed even more light on the moon’s water resources.

Prof Hayne said: ‘Astronauts may not need to go into these deep, dark shadows.

‘They could walk around and find one that’s a metre wide and that might be just as likely to harbour ice.’

As well as being used for drinking and sewage, water is vital for oxygen and fuel for launching rockets back to Earth or further into the solar system.

Nasa is currently working towards its ‘Artemis’ mission, which will see humans return to the lunar surface by 2024.

PrevPreviousBring the heat: Best gadgets to keep you warm outside
NextWhat time is Nasa’s moon announcement today and what are they likely to say?Next