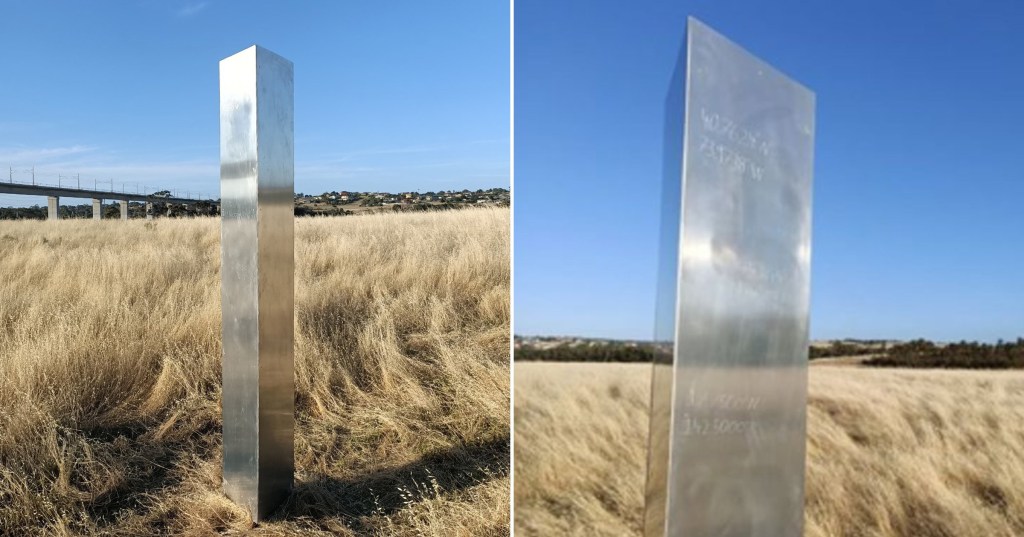 The monolith saga is far from over as new pillars keep cropping up in strange places around the world.

One of the newest pillars has been discovered in Australia. It measures three metres tall and, like the others, is constructed of shining silver metal.

But, unlike the blank monoliths appearing elsewhere – this new structure is covered with co-ordinates for locations around the globe. Some of these point to landmarks while others are totally random.

The top coordinate is a brownstone building in Brooklyn, New York, while the second location is the uninhabited island of Managaha in the Northern Mariana Islands, near Guam, in the Pacific Ocean.

The monolith is situated near the Seaford Train bridge in Noarlunga in Adelaide’s southern suburb. It was first spotted at 6pm local time last Thursday. As with many of the other monoliths, there’s no clue how it got there or who is responsbile for erecting it.

An Onkaparinga Council spokesman said he was only made aware of the structure after being contacted by the media and was currently investigating its origins.

Its discovery comes as new monoliths were also found in Poland, the Netherlands and Ukraine.

The initial monolith was discovered in Utah in the United States on November 18.

Swathes of curious tourists and explorers flocked to the structure and posed for photos with the enigma, with rumours circulating it could be a message from alien life because of the similarity to Stanley Kubrick’s 2001: A Space Odyssey.

In the following weeks, the news went viral and others began to appear in places around the world.

The metal obelisk was around 10 to 12 feet in height and had been embedded into the red earth. It was removed under cover of darkness by local adventure tour guides.

PrevPreviousGeminids meteor shower 2020 set to peak above the UK: when and where can you see it?
NextThis image of the sun was taken through the EarthNext