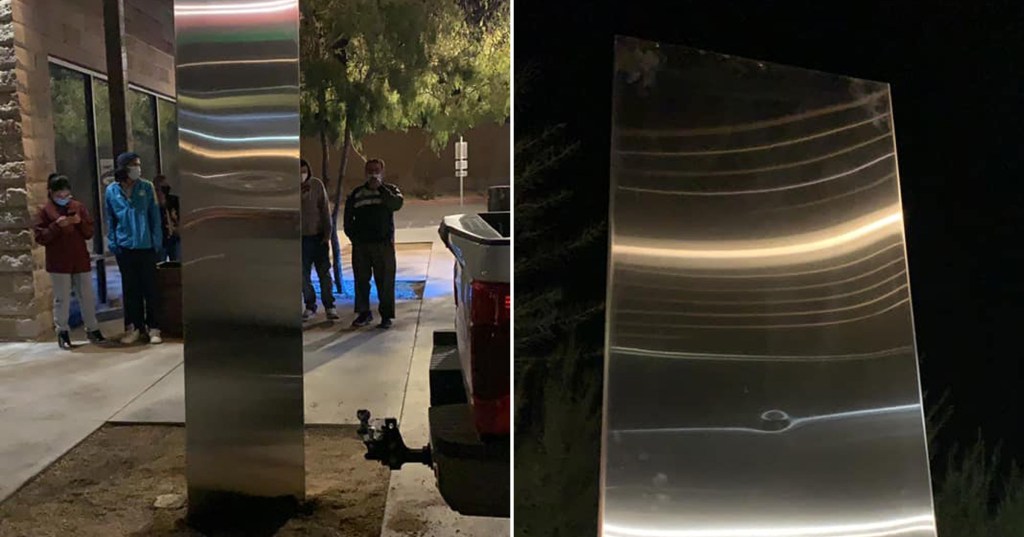 As the saga of the mystery monoliths continues to rumble on, it seems residents in Texas aren’t putting up with it.

One of the strange silver pillars appeared in a car park in El Paso, and just as quickly it was knocked over and taken away in a truck.

In the short time the monolith stood before it was removed, people flocked to it in order to snap pictures and add to the online conspiracy theory. In the footage, a sound can be heard when people knock the structure – suggesting it was hollow.

Furthermore, the men that took it away were able to remove it easily, suggesting it hadn’t been firmly fixed in place like some of the other monoliths.

One social media user said it was ‘not sturdy at all’ and could be knocked over ‘very easily’.

The strange sight of monoliths appearing at random locations around the world has been going on for a few weeks now. The first appeared in Utah in the USA, before spreading to Romania and California and even the Isle of Wight.

There was some interest in a Colombian monolith which appeared gold – unlike all the others which are silver.

At last count, there was something like nine or ten monoliths in various locations – but we’re sure that more will crop up in time.

Some of the other monoliths have disappeared a few days after being spotted. In the case of the original Utah monolith, it was revealed that local adventure tour guides removed it under cover of darkness.

The most plausible explanation we have is that the monoliths are some form of art project. A New Mexico-based art collective – called The Most Famous Artist – claimed that they were responsible for erecting the US monoliths in Utah and California.

But that doesn’t explain how similar structures appeared across the world at the very same time.

Responding to the Isle of Wight structure, group founder Matty Mo said: ‘The monolith is out of my control at this point. Godspeed to all the aliens working hard around the globe to propagate the myth.’

Meanwhile, global brands like McDonald’s, Amazon and Jeep have all jumped on the bandwagon and posted some amusing explanations for the sudden appearance of the alien monoliths.

It remains to be seen if there are still more undiscovered monoliths hiding in locations around the planet.

PrevPreviousGoogle Year in Search 2020: What were the top Googled searches this year?
NextCoronavirus lockdowns lead to only 0.01C reduction in global warming by 2050Next