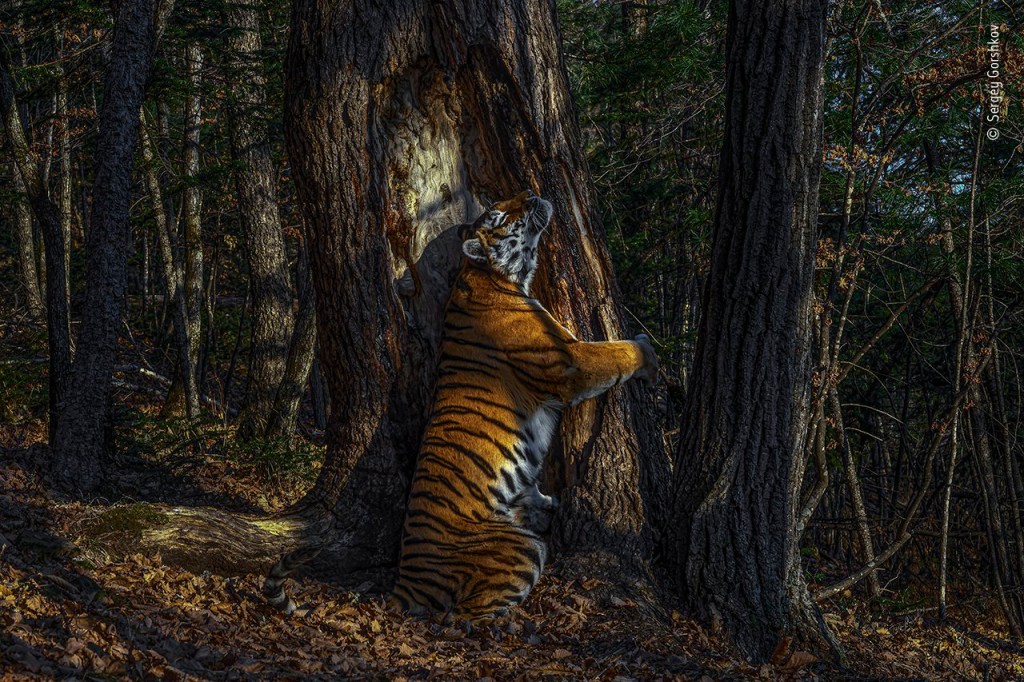 A ‘unique glimpse’ of a Siberian tigress hugging a fir tree has won this year’s Wildlife Photographer of the Year competition, it has been announced.

Russian photographer Sergey Gorshkov beat 49,000 entries from around the world to scoop the top prize in the prestigious contest with the image which took more than 11 months to capture with hidden cameras.

Judges said the photograph shows a ‘scene like no other’ and offers hope that Siberian, or Amur, tigers are making a comeback.

Liina Heikkinen won the Young Wildlife Photographer of the Year title with a picture she took on holiday in Helsinki, Finland, at the age of 13 of a fox cub trying to eat a barnacle goose in a rock crevice while keeping its hungry siblings at bay.

The winners were being announced by the Duchess of Cambridge at an online awards ceremony on Tuesday night streamed from the Natural History Museum in London, where an exhibition of the images will go on display.

The grand title winners were selected from 100 of the top images submitted to the competition in categories which highlight the world’s rich habitats, animal behaviours and species.

Winning images in different categories include a profile shot of a young male proboscis monkey, a rare picture of Pallas’s cats taken in the Qinghai-Tibet Plateau, and a polar bear in a circus.

Photos of a biologist watching a Cordilleran flycatcher build a nest outside his window, a tiny diamondback squid paralarva in the darkness, and two wasps from different species entering neighbouring nests also won category prizes.

Chairwoman of the judging panel Rosamond Kidman Cox said of the overall winning image, The Embrace: ‘It’s a scene like no other. A unique glimpse of an intimate moment deep in a magical forest.

‘Shafts of low winter sun highlight the ancient fir tree and the coat of the huge tigress as she grips the trunk in obvious ecstasy and inhales the scent of tiger on resin, leaving her own mark as her message.

‘It’s also a story told in glorious colour and texture of the comeback of the Amur tiger, a symbol of the Russian wilderness.’

Dr Tim Littlewood, the Natural History Museum’s executive director of science and a member of the judging panel, said: ‘Hunted to the verge of extinction in the past century, the Amur population is still threatened by poaching and logging today.

‘The remarkable sight of the tigress immersed in her natural environment offers us hope, as recent reports suggest numbers are growing from dedicated conservation efforts.

‘Through the unique emotive power of photography, we are reminded of the beauty of the natural world and our shared responsibility to protect it.’

The Wildlife Photographer of the Year competition is developed and produced by the Natural History Museum, London, where an exhibition opens on Friday October 16, before touring across the UK and internationally to venues in countries including Australia, Canada, Denmark and Germany.

The museum said limited visitor numbers and safety measures in light of Covid-19 will ensure that visitors have a ‘safe and welcoming experience’ and are able to see the pictures in a crowd-free gallery.

Tickets for the exhibition can be booked here.