sign up
Home ⁄ Coronavirus ⁄ How does the Oxford Covid-19 vaccine compare to Pfizer and Moderna?

How does the Oxford Covid-19 vaccine compare to Pfizer and Moderna? 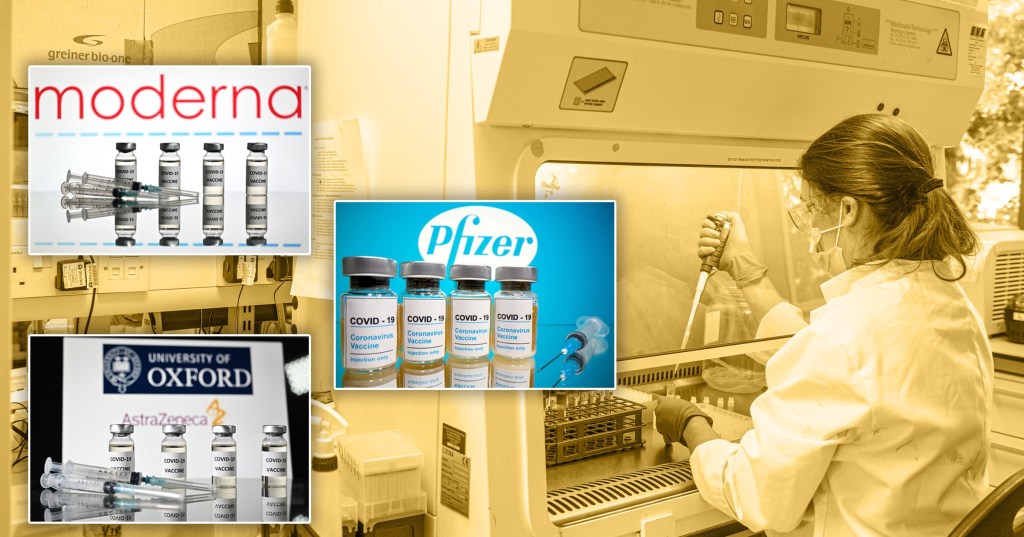 The vaccine being developed by the University of Oxford is up to 90% effective in preventing coronavirus, according to early data from phase three of the clinical trial.

Recent data from the Pfizer/BioNTech and Moderna vaccine trials suggests their candidates are 95% and 94.5% effective respectively.

But how does the Oxford vaccine compare with these?

What has been announced?

Oxford data indicates the vaccine has 62% efficacy when one full dose is given followed by another full dose.

But when people were given a half dose followed by a full dose at least a month later, its efficacy rose to 90%.

The combined analysis from both dosing regimes resulted in an average efficacy of 70.4%.

In the past it has taken years, sometimes decades, to produce a vaccine.

Traditionally, vaccine development includes various processes, including design and development stages followed by clinical trials – which in themselves need approval before they even begin.

But in the trials for a Covid vaccine, things look slightly different. A process which usually takes years has been condensed to months.

While the early design and development stages look similar, the clinical trial phases overlap, instead of taking place sequentially.

And pharmaceutical firms have begun manufacturing before final approval has been granted – taking on the risk that they may be forced to scrap their work.

The new way of working means that regulators around the world can start to look at scientific data earlier than they traditionally would do.

Aren’t there two other vaccines?

Yes, recent data from the Pfizer/BioNTech and Moderna vaccine trials suggests their candidates are 95% and 94.5% effective respectively.

Pfizer, with its partner BioNTech, is expected to receive US approval for its vaccine within days, with the UK’s Medicines and Healthcare products Regulatory Agency (MHRA) also assessing the data for potential approval.

And phase three trials of the Moderna vaccine continue.

Which jab is best?

Data from the Moderna trials indicate 94.5% effectiveness, but this number could change as the trials are ongoing.

Early results from Pfizer found it is 95% effective within 28 days of the first dose.

But Oxford researchers say it is difficult to make direct comparisons because it is not yet known exactly what everyone is measuring in the trials.

How many doses has the UK secured?

The UK has secured access to 100 million doses of the AstraZeneca/Oxford University vaccine, which is almost enough for most of the population.

More than 200 million doses of four other vaccine candidates have also been secured.

What do they cost?

Researchers suggest the Oxford vaccine could be relatively cheap to produce, with some reports indicating it could be about £3 per dose.

AstraZeneca said it will not sell it for a profit, so it can be available to all countries.

However, the details of the deals made by the UK Government have not been made public.

How do we know the vaccines are safe?

Full safety data has not been made available yet, but researchers report their trials do not suggest any significant safety concerns.

Who gets which vaccine?

As things stand the vaccines will be rolled out as and when they become available.

When will we get the vaccines?

No vaccine has been approved for use yet.

But the jab is likely to be rolled out in the UK from December, with the bulk of vaccination in the new year

Health Secretary Matt Hancock said that if all goes well in the next couple of weeks, the vaccination programme could potentially be rolled out from next month for the Oxford-AstraZeneca vaccine as well as the Pfizer vaccine.

How will they be distributed?

The Joint Committee on Vaccination and Immunisation (JCVI) has examined data on who suffers the worst outcomes from coronavirus and who is at highest risk of death.

Its interim guidance says the order of priority should be:

As things stand the vaccines will be rolled out as and when they become available, depending on which are approved first and how quickly companies can make them.

Are other vaccines on the way?

Around the world, scientists continue to work on developing other vaccines, with experts agreeing that more than one will be needed.

The UK has secured doses of vaccines being worked on by Novavax, Janssen and Valneva.

While it is not known exactly how long it might take for the population to be vaccinated, Mr Hancock has said it is looking as though things may start returning to normal after Easter.

But until then, and until there is some kind of herd immunity in the population – achieved through vaccination – people will need to continue to wear face masks, socially distance and wash their hands.