Giant ‘paperclip’ squid may have lived for centuries 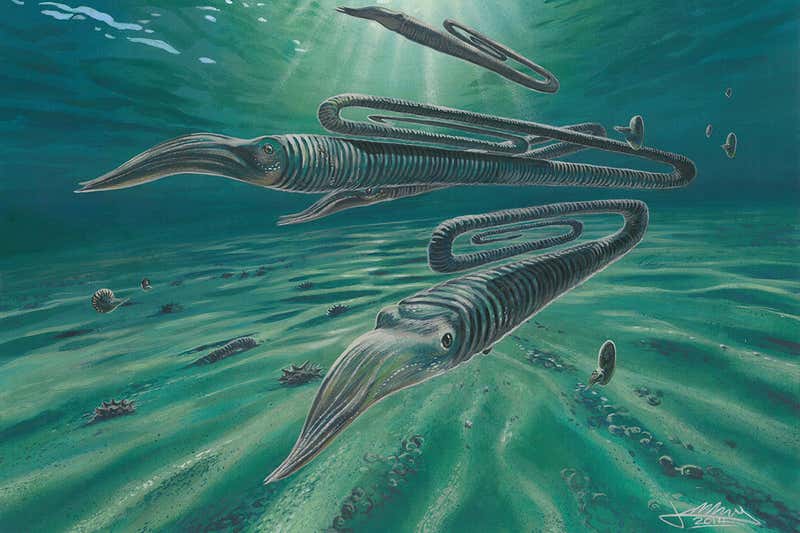 A paperclip-shaped ancient squid may have lived for hundreds of years, according to new research.

This hint at a long life can tell researchers huge amounts about the ancient animal and the environment in which it lived.

The 1.5m long creature lived around the same time as the Tyrannosaurus rex, 68 million years ago, but in very different circumstances.

Deep in the waters around freezing Antarctica, one of the suspected reasons for its long life was the lack of food around the ice-cold waters.

Linda Ivany and Emily Artuc of Syracuse University, who presented their findings to an online meeting of the Geological Society of America last week, argued the icy waters were crucial.

Ivany hypothesised that the low food supply in the freezing sea meant the creature had a slow metabolism in order to cope, leading to a long lifespan.

Another theory, according to Ivany, is they lived such long lives in order to maximise their chances of procreating.

Much of the information garnered about the strange animal is from examining its fossilised hard shell, shaped like a paperclip, which is what makes the creature part of the ammonite-family of dinosaurs.

Ammonites, a now extinct group of tentacled cephalopods (the same group that contains octopus and squid), make excellent fossils due to their hard shells.

‘It’s hard not to be entranced,’ Ivany told New Scientist.

Though the bony shells are difficult to understand, scientists think they may have found strong indicators the animals lived long lives.

In a 50-centimetre section of the creature’s shell, chemical signatures signifying annual releases of methane from the ocean floor were found stacked on top of each other, each in a different rib.

By counting the number of rib shells, the scientists could calculate the exact length of life – easily 200 years years old.

Though that lifespan might not seem long compared to some modern shellfish who live far longer, it’s actually quite unusual compared to cephalopods, of which D. maximum was a member.

Octopuses and squid tend not to live much longer than about 5 years.

Whichever the answer, the length of life can tell scientists a huge amount about the way the paperclip lived and its ecology, the relationship between the squid and the deep waters in which it resides.

The new evidence for the length of the lifespan will lead to a deeper understanding of the living paperclip’s lifestyle, says Ivany.

‘If you know something about an organism’s lifespan, you learn a lot about its ecology.’