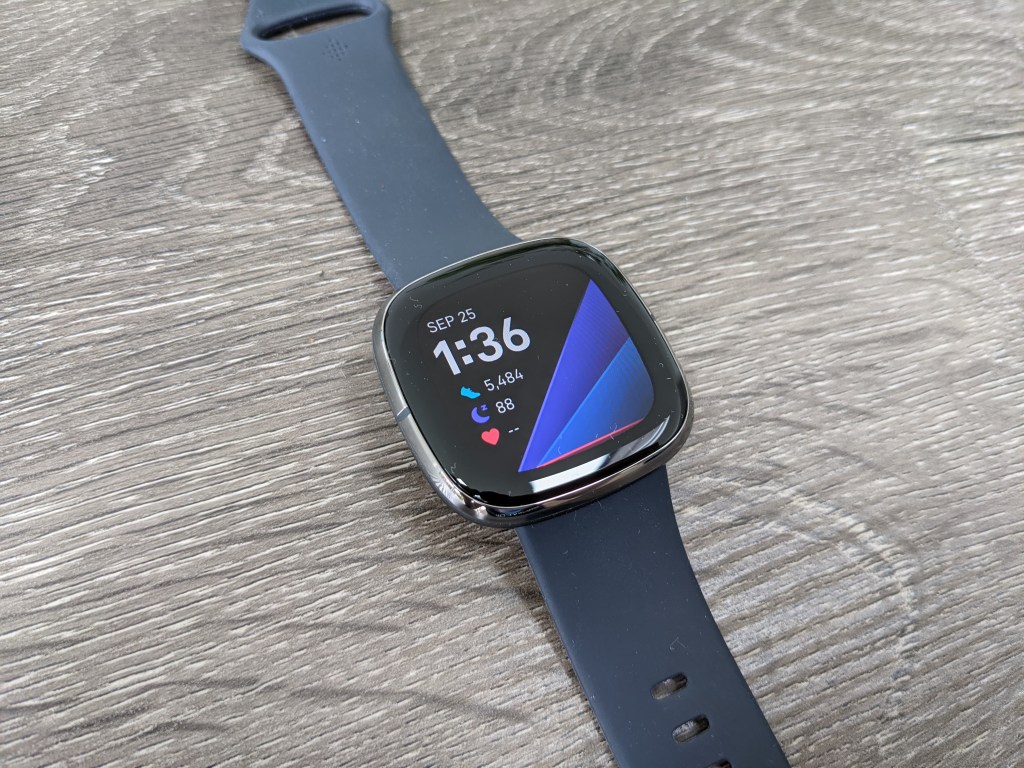 The Fitbit Sense arrives with a hugely ambitious mission: it’s going to help you beat stress.

And it’s launching in 2020. Which, for many people, may be the most stressful year they’ve ever encountered.

Fitbit’s capability in the fitness tracking world can’t be questioned. But the company seems to find the task of developing a bona fide smartwatch much harder.

I see no shortage of Fitbit Charges or Fitbit Inspires on people’s wrists when out and about. When it comes to smartwatches, I’m usually noticing Apple Watches or chunky Garmin sports watches.

The £299 Sense takes over from the Versa 3 and the earlier Ionic as the newest smartwatch in Fitbit’s arsenal and, as I mentioned, it wants to make you less stressed.

It does this through an electrodermal activity (EDA) sensor that measures your skin’s temperature. The idea is that when you want to take a stress reading, you hold your palm over the face of the watch and breathe.

By combining your heart rate with your skin temperature, the Sense will get an idea of how stressed you are and give you a score on the accompanying Fitbit app. You can opt for a two-minute quick scan or a longer 60-minute guided mindfulness session conducted on your phone followed by a scan.

That may be the USP of the new watch (and more on it later), but it’s far from the only feature. There’s 24/7 heart-rate tracking as well as NFC for making payments and the option to receive notifications from your phone.

Alongside that is GPS tracking for runs and cycles in the great outdoors and 50 meters of water resistance if you want to take it for a swim. There’s also a microphone on board the Sense for talking to Amazon’s Alexa or (coming in late 2020) the Google Assistant as well as taking calls.

In terms of design, the Fitbit Sense borrows more from the curvy Versa than the straight-edged, 80’s sci-fi Ionic. What’s important, though, is the bright, crisp 1.58-inch, 366×366 resolution display.

It’s not too big that you feel there’s a TV strapped to your wrist but big enough that you can glance down unevenly mid-run and check your stats. The only thing to point out is the bezels around the edge of the display are fairly chunky.

If you’re a fan of switching straps up then you’ll be pleased to know Fitbit has made that very easy with the Sense. Two small buttons either end of the watch module release the straps so you can clip in a new one extremely quickly.

On the left side of the Sense is the only physical input – a haptic indent ‘solid state button’ that acts to wake the watch if you have it set to manual mode. It also doubles up as the ‘back’ button while using the software. It can also be used to open a customisable shortcut (Fitbit Pay, for example) through a long-press and call up your four favourite apps with a double-press. The lack of a physical push button helps to keep the Sense waterproof. But I did find that hitting the solid state button quickly and accurately wasn’t as intuitive as a physical button would be. It’s a minor annoyance, but a trade I’m willing to make for 50m of waterproofing.

If desired, you can also set the Sense screen to always-on, which utilises low power watch faces. The drawback is that you can expect a much reduced battery life if you’ve set the Sense to always-on. You’re looking at around a 50% drop from near six days down to three.

As a fitness device, the Sense is excellent. As a fully-featured smartwatch, it leaves a lot to be desired.

To begin with, although the watch will provide a lot of data on its own, you’re going to be accessing Fitbit’s excellent app for most of the insights. This will give you a breakdown of your sleep performance, goal setting and streaks regarding exercise and stress management. If you use the GPS to log runs or cycles, you can see a map of your route and splits detailing pace, heart rate and suchlike.

Although most of the content can be accessed for free, the company also has a Premium tier that unlocks more functionality for £7.99 per month. This includes things like guided workouts and mindfulness sessions as well as more in-depth sleep analytics.

The aforementioned EDA scan app will require you to place your palm over the watch and then wait while it measures your ‘responses’. Upon completion it tells you how many responses you got and compares your heart rate at the beginning to the end. If it drops, congratulations. You’re then asked to log your stress level through a set of options – from ‘very calm’ to ‘very stressed’.

Over time, the Sense will give you a score in the Fitbit app that’s based on responsiveness (how much strain your body is under based on your heart rate, heart rate variability and electrodermal activity from the EDA Scan app), exertion balance (impact of your physical activity), and sleep patterns (how well you’ve been sleeping).

The usefulness of this feature is routed in consistency. I’ve no doubt that if you used it properly for a few months you’d be able to build up a picture of your overall stress peaks and troughs. At present, I have no real benchmark to go by – so I can’t say for certain how effective it is at lowering my stress levels.

Even if there’s no immediate application of this data that I can see, I have to commend Fitbit for heading in this direction. The importance of positive mental health is becoming more and more apparent and a ready-made tool like this to help people avoid stress-induced illnesses is a good idea in my book.

The Sense is also set to get an ECG (electrocardiogram) app in the near future after it passed regulatory clearance following clinical trials. This app – similar to one offered by the Apple Watch – will take your heart rate and look for AFib. This is an irregular heart rhythm that increases the risk of serious complications like stroke. It’s not available on the test model I’ve been using but will likely come through towards the end of the year.

I have found the heart-rate tracking – both during sleep and exercise – to be pretty accurate. It works in conjunction with Fitbit’s Active Zone Minutes that aim to push you harder during exercise by logging when your heart rate drops into different zones.

Likewise, while you sleep it’ll also measure your Sp02 levels skin temperature. The former is related to your blood oxygen levels while the latter will provide you with a baseline average after three nights. The drawback here is that you have to activate a specific SpO2 watch face before you turn in for the night – otherwise the watch won’t track it.

These advanced sensors go alongside all the usual fitness metrics – steps taken, calories burned, distance travelled, etc. You can also use the app to log weight changes, water consumption and what food you’ve eaten.

Like I said, from a fitness perspective, the Sense is an amazing tool that gives you so, so much data on how your body is performing day-to-day.

Unfortunately, as a smartwatch – it doesn’t quite live up to my expectations.

I was testing it on a Pixel 4 and I found it would generally sync up well with messages, calls and calendar notifications. There’s also a decent selection of apps from Fitbit’s own store. But general performance wasn’t great. There was a general sense of lag when browsing and trying to install new apps. Frequently the connection would drop and I wouldn’t be able to finish installing an app.

I’m also not impressed with the way the Sense handles music. You can’t load offline music onto the Sense the same as you could with the Ionic. Instead, you have to sign up for Deezer or Spotify and use them. You can download Deezer playlists but only remotely control Spotify if you’re a premium subscriber. If I didn’t want to use these services, I also couldn’t find any way to remove them from the Sense. To this point – I also couldn’t take the pre-loaded Amazon Alexa app off the watch. Lastly, it takes a fair bit of fiddling to get the Sense to control music on your phone and it’s a far cry from the simplicity of Apple’s set up.

Naturally, it’s much harder for Fitbit to integrate its smartwatches with the vast cacophony of Android phones in the same way as the Apple Watch integrates with an iPhone. And, realistically, if you’re an iPhone user then there’s no…ahem…sense in choosing a Fitbit watch over the Apple Watch. Although, if you just want the basic trackers then Fitbit is still the way to go.

Overall, the Sense feels to me like a very, very good fitness device that needs a little bit more time to get itself straightened out. In time, we’ll see the ECG app and Google Assistant and perhaps a bit more Sp02 functionality than through just one watch face while you sleep.

This is still a pretty compelling package – especially if you opt for a Premium subscription – but it’s going to take the average person a good couple of months to really make sense of all the data that’s being presented to them.

I’m going to enjoy using the Sense for a bit longer to try and get the absolute most out of it.

Meanwhile, if you’re interested in getting one for yourself, you can find it for £299 here on Amazon.